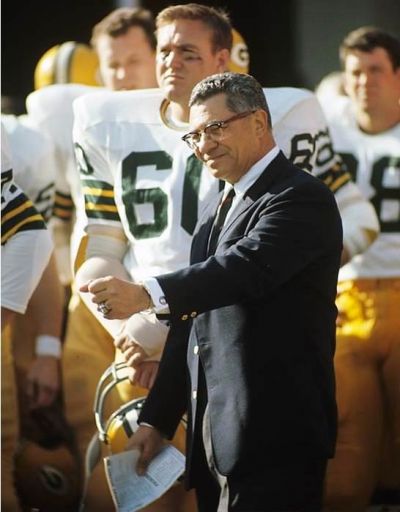 Building a winning organization like Coach Vince Lombardi did at Green Bay made him a household name in the 1960s and a leader to be revered. His winning ways and charisma transcended him beyond football into business, education and even politics. He was urged to join Richard Nixon in 1968 as the vice-presidential nominee for the Republican Party. Lombardi was strictly a football coach, a great one, indeed, and politics were not his passion; football was his love and he knew it.

The Packers were winning and Lombardi’s leadership in coaching reigned over the NFL. Winning organizations do not just become victorious and heralded without a character person leading the way. Lombardi believed that “Character is the perfectly disciplined will,” (Lombardi, 2001). Character is built on truth and faith as well. Lombardi was that remarkable character that would successfully lead the Packers into football immortality. Relevantly, Lombardi states: "Leadership rests not only upon ability, not only upon capacity; having the capacity to lead is not enough. The leader must be willing to use his authority. His leadership is then based on truth and character. There must be truth in the purpose and willpower in the character" (vincelombardi.com). Lombardi’s winning record made the sports world take notice of his exceptional leadership skills, clamoring for his leadership techniques in school and college sports programs throughout the country. Lombardi’s public appearances were increasing and he was a celebrity on the rise. As a result, Lombardi began writing down his thoughts about leadership, creating speeches and axioms that would define his leadership style for all-time. Lombardi believed that “Leadership is based on a spiritual quality; the power to inspire others to follow” (vincelombardi.com). He believed that leadership was special and God-sponsored so, leaders must excel.

Lombardi very much wanted good leaders to be recognized and rewarded for their achievements. Lombardi wrote: "Our society, at the present time, seems to have sympathy only for the misfit, the maladjusted, the criminal, the loser. Assist them – absolutely. But I think it is high time that we stand up for the doer, the achiever, the winner, and the leader, the one who sets out to do something and does it." Lombardi was on-the-mark with recognizing individual excellence because a great society is measured by the achievements of its citizens.

Winning bestowed Lombardi with great respect as a leader, hence the birth of the Lombardi leadership model (2001). Naturally, it was outlined by his son, Vince Lombardi, Jr. The Lombardi leadership model is built on four major tenets: 1) knowing self, 2) building character, 3) earning competence, and 4) building vision. "Leadership is not just one quality, but rather a blend of many qualities. Contrary to opinion, many leaders are not born; they are made. And they are made by hard effort, which is the price we pay for success." Lombardi also called for a leader that builds character among his members. Character, Lombardi points out, cannot be wished for; it does not magically appear. "A man cannot dream himself into character; he must hammer out and forge one for himself." Character builds and promotes successful leadership in organizations, per Lombardi, and he was right, again. Verifiably, a comprehensive, clear vision unifies the whole organization under one robust purpose, one mission.

"The key to my father’s success was his extraordinary ability to get people to go beyond themselves – to give more to the cause than they ever believed they were capable of giving" (Lombardi, 2001). The troops, through the character-building program in the Green Bay organization, believed in their leader, Lombardi. The Lombardi leadership model remains a classic that is emulated nearly 48 years after the death of its inventor. The beauty of the Lombardi leadership model is that he harnessed all four tenets masterfully and gracefully into a winning wonderland for the 1960s Green Bay Packers. Proudly before games in the Green Bay Locker Room, Lombardi reminded his players, saying: “Remember this: You are the Green Bay Packers and you are the world champions of football. Make me proud.” (vincelombardi.com)