The beautiful towns of Il Chianti 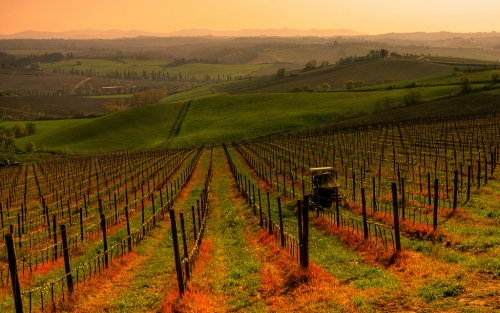 The beautiful towns of Il Chianti

Only a few regions in Italy can offer such a beautiful and rich panorama as the Chianti wine region. This is the classic Tuscan countryside - Green hills with miles after miles of vineyards producing some of Italy's best -marketed wines, olive groves, gentle rolling hills, ancient walled villages and panoramic roads like you have never seen before. Chianti Classico spreads from Florence to Siena and includes the small municipalities of Castellina, Greve, Panzano, Radda and Gaiole In Chianti.

CASTELLINA IN CHIANTI - Moving towards Siena you'll reach Castellina in Chianti which dates back to the Etruscans, as attested by the Etruscan tombs of Montecalvario. This is the most medieval of the Chianti League towns, with a glowering Rocca fortress. Its great position in the middle of the Chianti region made this town a strategic headquarters between Florence and Siena. Confirming this glorious past, the massive castle stands proudly over the town and the impressive Via delle Volte - a tunnel- like road pierced by windows overlooking the countryside offers one breathtaking panoramic views of the countryside. It was also a soldiers' walk when this was Florence's last outpost before Siena. Walking through this small town you will be amazed at the many historical buildings that belonged to the Florentine and Senese aristocratic families. The church of San Salvatore is certainly worth a visit, rebuilt in the Second World War, the church displays a beautiful late 14th century fresco by a Tuscan master. I also recommend that you visit the Museum Archeologico del Chianti Sienese where you will find many of the archeological findings from the Chianti region, and particularly Etruscan findings from Montecalvari. In Castellina you will have no problem finding plenty of local wine shops to taste and purchase its fine Chianti Classico wines or virtually any of the wines produced in the region of Toscana. My favorite spot is the Antica Fattoria la Castellina located on the Via Ferrucio, 26.

GAIOLE IN CHIANTI - Not far from Radda in Chianti is the beautiful small village of Gaiole in Chianti that dates back to the Middle Ages. Gaiole was an important marketplace for the castles in the surroundings due to its position between Chianti and the Valdarno (Valley of the Arno River). While there is very little to do in this village, Gaiole is still an important point of interest for this area. Here you will find many lovely farmhouses that are ideal for lodging, great wine shops and local wineries perfect for sampling the Chianti wines. Not to be missed here is the BROLIO CASTLE, Il Chianti's most quintessential castle where the famous Ricasoli families have produced great wines since the 12th century. Walking around this castle you will be amazed at its stunning views through the arrow slits, peep into the burial chapel of the Ricasoli family and its marvelous gardens on the backside of the castle. Be sure to stop and enjoy wine tasting of Il Chianti's best known wines aged in the cellars of the Castello di Meleto. My favorite place to stay here is the Castello di Montegufoni. Purchased by the British aristocrat Sir George Sitwell in 1909 and kept by the family until the early 1970's it has become an amazing place to stay.

GREVE IN CHIANTI - Located 20 kilometers south of Florence Greve is considered by many as the gate to Chianti and has become Chianti's unofficial capital. It is famous for its unusual triangular shaped Piazza Matteoti , that has been market place for the castles and walled villages in the surrounding Middle Age and its large porticoes along the three sides that protect it from the sun and rain while shopping. You will find wine shops galore here. My favorite and a must stop is the famous Macelleria Falorni one of Italy's great butcher shop that is stuffed with hanging prosciutto, salamis, aging cheeses and free samples. In the center of its magnificent square stand the bronze statue of Giovanni Verrazano who discovered the New York harbor and was commemorated there by the Verrazano Narrows Bridge. At the top of the square stands the Church of Santa Croce, which was originally a medieval church remodeled according to the Renaissance Revival architectural style, displays a few precious works of sacred art including Madonna and Saints by Bicci di Lorenzo. For a one stop wine tasting where you can sample virtually every wine produced in the region of Tuscany, you must stop at the Cantine di Greve in Chianti, an unbelievable vast enoteca with a small wine museum and over 1200 varieties of Chianti and other wines produced in this region. To taste the different wines you simply purchase a prepaid wine card from the central bar which will cost you 10 to 25 euros, stick it into one of the many taps based on the wine that you have chosen to sample, and out comes your wine. It's is unquestionably a wine lovers delight and it allows you to

PANZANO IN CHIANTI - Situated just 7 kilometers south along the Santa Chiantigiana from Greve is the lovely medieval village of Panzano. It is the most populous town in Chianti. Since the 12th century it played an important defensive role for Florence and its surrounding area. The Castle of Panzano played a key role in defending the Florentine Republic during the battles between Florence and Siena. This structure can still be recognized within the older section of the town including the Church of Santa Maria which dates back from 1200. Not far stands the Pieve di San Leolino, a beautiful ancient rural church which dates back to 982. In spite of its Renaissance exterior which is characterized by the elegant "pietra serena" stone and portico, the church remains an exquisite example of a Romanesque Basilica with three naves. Inside its courtyard you will find precious works of art that are produced by local masters. This is a lovely town simply to soak up the atmosphere of times gone by and sitting in its main square to relax and enjoy a glass of Chianti classic wines. It is also the home of the world famous exuberant, charismatic butcher DARIO CECCHINI. Be sure to stop to have lunch at Dario's Antica Macelleria Cecchini where he will recite passages from Dante's Divine Comedy while serving his guests. You must try his Florentine steak or his fresh McDario hamburger.

RADDA IN CHIANTI - Located just 11 kilometers east of Castellina this town has preserved its original medieval look and is the only hilltop member of the Chianti wine region capped by the 15th century Palazzo Del Podesta which overlooks the main square together with the Romanesque Church of San Niccolo. Its ancient walls still defend the center, with its charming small streets. The Palazzo was the headquarters of the League of Chianti for over four centuries. Just outside the center stands the ancient Franciscan Cloister of Santa Maria in Prato. This is a wonderful town to walk along its narrow cobblestone medieval streets while sipping a glass of wine taking in the spectacular panorama of the vineyard covered hills that surround the town. Very close to Radda stands the ancient gorgeous old stone hill-top hamlet of Castello di Volpaia where particularly lovely wines, olive oils and vinegars have been made for centuries. I also recommend stopping at the Commenda of San Eufrosino, a 14th century church transformed into a wine bar. Today the Castello di Volpaia is a small tourist town where you can experience the ancient culture of wine. You can also rent farmhouses and apartments on this lovely estate. Stop at the Enoteca Toscana to purchase the local wine and olive oil.

Peter D'Attoma is the president of DaVinci Custom Travel & Tours. He has nearly 30 years of planning and designing premium independent, custom and escorted tours of Italy for individuals, groups and incentives. For more information call 330-633-2292 or visit www.davincicustomtravel.com.