My Travel Experiences in the Region of Molise 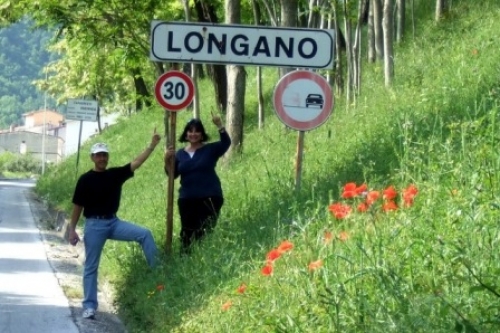 Located in the Matese Mountains, which reach elevations over 6,700 feet, Molise is the region in which the small village of Colle d'Anchise lies. Two years ago I decided to visit the town, the birthplace of my paternal grandparents, Robert and Carmella Longano, who immigrated to Cleveland in 1906 after marrying in their Italian hometown. Although I lived next door as I was growing up on Brecksville Road in Independence, they never spoke of Italy, or as they called it, "the old country."

I was curious about the place where they grew up. On one beautiful day toward the end of May in 2011, my brother Rick and his wife, Monica, and I arrived in Colle d'Anchise. I had made reservations through e-mail in Italian at La Piano dei Mulini. This place was not a hotel but rather an albergo diffuso, a newer type of accommodation in Italy. A little like an agriturismo, an albergo diffuso uses different buildings which have been restored but maintain their authenticity. What was once a mill for dyeing wool is now a beautiful stone building sprawled out over a large piece of land in the countryside. A small river, more like a brook, glowed next to it, creating an extremely tranquil scene.

The village is very small with a population of seven hundred, although I doubt that many still live there. Many of the old stone single floor homes are vacant, as locals have moved away to find work. It seemed so odd to walk on the streets that my grandparents walked, probably thousands of times. Four churches are found in the small village of Colle d'Anchise, the largest one, Parrocchia Santa Maria degli Angeli is the church where my grandparents were married. I was even able to attend an authentic Sunday Mass, all while thinking what my grandparents would have thought.

Surrounding the village are beautiful views of fields, hills, and further away, the snow-capped mountain peaks. These fields were the same ones my grandparents worked when they lived there--it felt so surreal to be there.

About 45 kilometers away is the even smaller village of Longano, in the province of Isernia but still in the region of Molise. Rick, Monica, and I were curious to go there, since the town shares our last name. Once we arrived up the hill to this small village, we parked in the only piazza, and went into the bar to have something light to drink. Immediately the local Italians wondered who we were, and why we had come here. We let them know that Longano is our last name, and when Rick showed them his driver's license, you would think that we were royalty. The word spread quickly throughout the village and we were invited for dinner, with a promise of a cooked pigeon. These people were so friendly and welcoming we wished we could stay longer. I loved being there