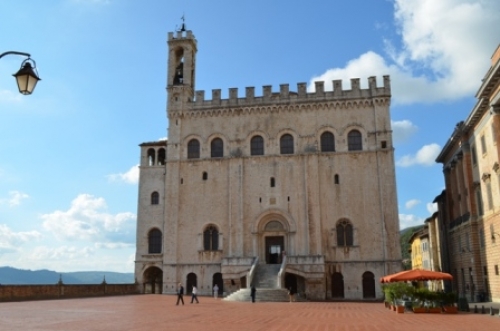 Tucked away in the northeast corner of Umbria and not far from Perugia, Gubbio is a city that cannot be easily forgotten. Each time I visit the region of Umbria I make sure that I stop to spend a day in Gubbio. The town sits at the foot of Mount Ingino, nestled in a very lovely and splendid isolated location.

The city and its historical riches are well preserved, and the centuries have left traces of Gubbio's Etruscan past, Roman municipal ruins and years of subjugation under medieval aristocracy. Best known for its distinguished school of painting, its traditions in ceramics, and illustrious writer, Bosone Novello Raffaelli, (Italy's "first novelist"), Gubbio is a unique and picturesque Umbrian treasure with plenty to offer its visitors. It's a town that has preserved its rich cultural and artistic heritage.

Gubbio is not serviced by a major autostrada (freeway), nor does it have a train station. This is not a town that you would want to stop just for a short visit. To really get the most out of this lovely Umbrian town and to appreciate and enjoy all that it offers, you must spend at least an entire day here. Half of the experience is arriving to Gubbio, since the only way to to get there is by driving through a spectacular winding road. As you begin to approach Gubbio from a distance, the light stone of its buildings contrasting with the darker shades of the Apennines behind, will make you realize that your journey here was well worth it.

Gubbio has a very distinctive feel that can be perceived as soon as you start to explore its Roman street plan and its magnificent piazze. It's an extravagantly beautiful city and certainly one of Italy's best-kept medieval cities. A visit here is a full immersion in over 2,000 years of history. Gubbio was an important center for the Umbrians before the Romans took over, according to the Eugubine Tablets, a unique archeological treasure of seven bronze sheets discovered back in the 15th century. The tablets that serve as fundamental epigraphic evidence of early Umbrian civilization are kept in the Museo Civico and were discovered by a local farmer who sold them to the city for two years worth of farming rights. The Tavole Eugubine are the only existing records ever found in the Umbrian language and shed light on what life must have been like back in the second century BC, including a list of Gubbio's enemies and a series of instructions for animal sacrifices. They contain information regarding religious laws, specific sites and the town's system of government.

Gubbio is also home to the well-preserved remains of a large Roman theater dating back to the first century AD. Back in the Roman days it could hold up to 6,000 people. Today this theater is still used for festivals and concerts during the summer months. Gubbio's golden age was undoubtedly the Middle Ages, a time when the city enjoyed a wealthy status as an independent comune (municipality) and when the beautiful palazzi and churches were built. To really appreciate this, climb up to the main square, the stunning Piazza Grande, from whose belvedere you can also enjoy a picturesque view of the town. Overlooking the Piazza Grande is the 14th century Palazzo dei Consoli, an imposing Gothic building supported by great arches rising above Via Baldassini. It is famous for its two-tone bronze bell, housed in the bell tower almost 60 meters high. Commonly referred to as Campagnone, it is played by hand 21 times throughout the year by the campagnari who fearlessly climb to the top of the bell tower. Just a few meters away, Gubbio's simple cathedral with its 12th century stained glass windows is most notable for its paintings, including a nativity painting attributed to Eusebio di San Giorgio, Pinturicchio's talented scholar.

Another great gothic church in Gubbio is Chiesa di San Francesco, which boasts original frescos, like the 15th century series on the Madonna by Gubbio-born artist Ottaviano Nelli. The 13th century church was built on the site of the residence of the Spadalonga family. When St. Francis gave up the worldly pleasures, he sought shelter with the Spadalonga family and would meditate in what is now a chapel of the church. The connection between Gubbio and Italy's most famous saint is one that is worth mentioning. Legend has it that during St. Francis's time, a wolf was terrorizing the people of the town. St. Francis spoke with it and managed to tame it. He brought the beast to Gubbio and made an agreement with its people that in exchange for regular meals it would stop preying upon the city. The animal kept his promise and can be seen in a bas-relief over the door of a little church in Via Mastro Giorgio.

One of Gubbio's main cultural events is the Festival of the Ceri (Corsa dei Ceri), which takes place every year on May 15. It involves running through the medieval streets of the town carrying seven-meter tall, wooden structures weighing nearly 600 pounds. Known as ceri (candles), each is topped with a statue, respectively of St. Ubaldo, St. George and St. Anthony. These are fixed to frames that the ceri bearers carry on their shoulders in a wild race through the town and up to the sanctuary of St. Ubaldo-- a stiff climb up Mount Ingino. The ceri symbolize the three factions of the city's populace: the masons, farmers and the artisans. This is the main celebration in honor of St. Ubaldo, whose main achievement was to persuade Frederick Barbarossa not to attack his hometown back in 1155.

In addition to Gubbio's main traditions, the Palio della Balestra, is held on the last Sunday in May and involves archers from Gubbio and Sansepolcro dressed in medieval costumes with matching crossbows in a contest that dates back to the year 1461. The Piazza del Bargello is dominated by a beautiful 16th century fountain that used to be Gubbio's main water source, known as fontana dei matti (madmen's fountain). It is said that you can officially become a Gubbio madman by running around the fountain three times then being splashed with its waters.

PRODUCTS:The typical Gubbian products include salumi di cinghale o cervo (boar or deer sausage), pecorino cheese and savory truffle oils. You can find these and other typical products on the shops located along the Via Piccardi.

TRANSPORTATION:The nearest train station to Gubbio is Fossato di Vico's, located 19 kilometers away. Trains go to Ancona, Rome and Spoleto. Buses are a more convenient travel means than trains and run daily to and from Perugia.

THE BEST OF GUBBIO:

BEST LOCAL FOOD: Torta al testo is a flatbread cooked on a tile placed on an open fire. It can be filled with any available ingredients -- whatever you choose, it's always excellent. Try it at any of the bars and pizzerie in town.

BEST HOTELS: Park Hotel Cappuccini located on Via Tifernate or Relais Ducale located on the Via Galeotti, 19.

BEST VIEW: The café near the sanctuary of St. Ubaldo is definitely a place that you can spend the whole afternoon just enjoying the scenery.

BEST EXCURSION: Be sure to take the cable car that links the sanctuary of St. Ubaldo to Mount Ingino (908 meters high). The mountain is rich in extensive pinewoods and offers a breathtaking view of the Apennine mountain range of the region of Umbria and Marches.

BEST DRINK: Top off your meal with a shot of Amaro Monte Ingino, also known as Liquore di Sant Ubaldo, made with herbs from the mountain of the same name.

BEST SOUVENIR: Pick up a traditional piece of local pottery. This craft goes back to the 15th century and is currently enjoying a big revival in the many shops that sell ceramics.

Peter D'Attoma is president of DaVinci Custom Travel & Tours. He has over 25 years of planning and designing independent, custom and escorted tours of Italy for individuals, groups and incentives. For more information call 330-633-2292 or visit www.davincicustomtravel.com.

More in this category: « Romantica Italia The beautiful towns of Il Chianti »