Coach Dick Vitale: "I Am Living the American Dream" 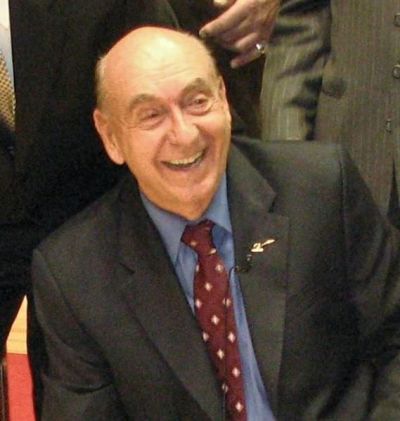 In 1973, few knew of Dick Vitale outside of those residing in the tri-state region. He is a first-generation Italian American who was born in 1939 in Passaic, NJ to John and Mae Vitale, Italian immigrants, both working tirelessly in the clothing industry to give him a better life in America.

“I am living the American dream,” Vitale passionately emphasizes. “My mom worked in a factory and sewed coats, until she suffered a stroke. Then she continued to sew coats in our cellar, dragging her leg as she worked. I learned about love, family, and loyalty. I watched as my dad pressed coats in a factory. He told me that I needed to get an education so that I could do other things in life,” writes Vitale in his autobiography.

“I cannot thank my mom and dad enough for instilling in me to never use the word, ‘can’t.’ My mom and dad did not have a formal education, but they had doctorates of love. They told me that if you give 110 percent all the time, beautiful things will happen. I may not always be right, but no one can ever accuse me of not having a genuine love and passion for whatever I do. ESPN and many sporting organizations have been grateful enough to recognize this,” writes Vitale.

Today, he is known almost everywhere in the American sports world where he enjoys his legendary status as a hall of fame basketball coach and active ESPN broadcaster.

Vitale’s roots are teaching the game he has loved since childhood – basketball. After graduating from college, he taught at Mark Twain Elementary School (Garfield, NJ) and coached junior high football and basketball. He began coaching at the high school level at Garfield High School, where he coached for one season (1963-64).

Young Vitale got his break in 1973 and was named the head basketball coach of the University of Detroit, compiling a winning percentage of .722 (78-30), which included a 21-game winning streak during the 1976-77 season when the team participated in the NCAA Tournament. Vitale gained basketball coaching notoriety and became celebrated nationally. In April 1977, Vitale was named Athletic Director at the University of Detroit and later that year was named the United Fund’s Detroit Man of the Year. In May 1978, he was named head coach of the NBA’s Detroit Pistons, which he coached during the 1978-79 season prior to joining the ESPN broadcast team.

In 1979, Vitale began working with ESPN as a college basketball broadcaster and has been contributing as an analyst ever since. His thorough knowledge of the game is presented in an enthusiastic, passionate, sometimes controversial, but never boring style. Vitale has distinguished himself with ESPN by spontaneously spewing his riveting and conjured basketball insights and memorable quips. Vitale makes an indelible impression on audiences. He is that vivacious personality that there is no substitute for.

Remarkably, the always-energetic Vitale is a favorite endorser among a wide variety of major corporations. He is also one of the nation’s most requested public speakers, providing motivational speeches to numerous leading corporations and organizations which have since raised millions of dollars across the U.S. In 1987, he signed an exclusive contract with the Washington Speakers’ Bureau.

Vitale is quite the philanthropist. He is on the Board of Directors of the V Foundation, a non-profit organization dedicated to finding a cure for cancer and founded in 1993 by ESPN and the late Jim Valvano. He has co-chaired with Mike Krzyzewski and the Jon Saunders V Foundation Golf Classic and hosts an annual V Foundation Gala in Florida which gathers numerous celebrities to raise money and honor individuals such as Krzyzewski, Bob Knight, and Pat Summit.

Vitale and his wife, Lorraine, have two daughters, Terri and Sherri, who both attended the University of Notre Dame on tennis scholarships, both graduating with MBAs. Vitale's proud involvement with Notre Dame includes the endowment of the Dick Vitale Family Scholarship, presented annually to an Irish undergraduate who is participating in Notre Dame sporting activities and not receiving financial aid. Recipients have included the school’s mascot, cheerleaders, and band members, as well as players.