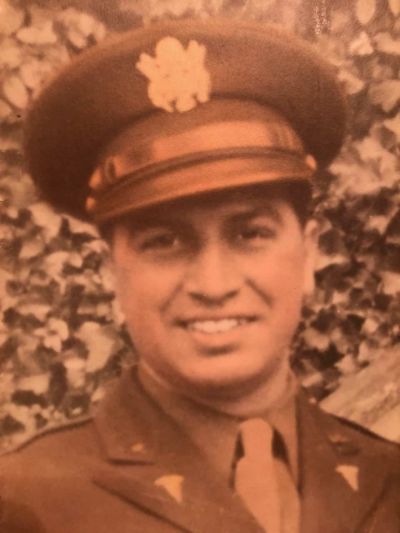 First-generation Italian American Thomas A. Lombardo, Sr., was one of the very best pediatricians, who gloriously returned from WWII as a decorated Army captain and a Bronze Star hero. He then established a thriving medical practice, serving Buffalo’s Lower West Side where he was born-and-bred for eventual leadership and care for others. Dr. Lombardo was beloved and appreciated by his patients. Most of his patients in the 1950s-70s were of Italian descent.

Dr. Lombardo served in WWII from July 1, 1942, to December 31, 1945. While on active duty, he was called up to replace the medical officer who had been tragically killed by a sniper. Captain Lombardo was ready. He dutifully arrived for service at the Pacific Theater of Operations, practicing medicine under the most rudimentary and trying conditions in the Philippines. He was assigned as battalion commander and medical chief officer in the artillery.

After his honorable discharge at the end of WWII, Dr. Lombardo completed his pediatric residency at E.J. Meyer Memorial Hospital in 1946 and began his own practice at 305 Porter Ave. in the neighborhood where he grew up. His practice soon became one of the largest in Western New York. In 1970, Dr. Lombardo moved his practice to Niagara St., adjacent to Prospect Park, then moved for the last time to Allentown in 1975 before retiring in 1982.

Dr. Lombardo was the eldest son of Sicilian immigrants, and he was inspired to become a physician from their family physician, recalls his son, Dr. Thomas Lombardo Jr. “He was a family practice doctor who made a house call to my dad’s home on School St. on the West Side. He was so impressed with my father’s demeanor. The man asked him, ‘How are your grades?’ my father said, ‘My grades are OK.’ The doctor told him, ‘They can’t be OK. They have to be very good. You have to be on the honor roll in every grade, starting right now in grammar school,’” recalls Dr. Lombardo Jr. Those words of wisdom ignited not just a fire, rather an inferno, bringing out his competitive best, fortunately for him and his family. That physician took a personal interest in him, following young Lombardo through high school and into college, mentoring and encouraging him every step of the way.

Dr. Lombardo had a kind demeanor and greeted his patients warmly; “Per piacere, non ti preoccupare, senora, le cose vanno più bene per tuo figlio/figlia. Dio provvede.” “Please don’t worry, mam, everything is going to get better for your son/daughter. God provides.” He possessed a personal touch, an endearing and smiling way about him, and many Italian mothers were certainly comforted with his care. Dr. Lombardo is still remembered for his bedside manner.

After seeing sick children and meeting with mothers all day in his office, he would uncommonly do house calls in the early evening. He was tireless during the day and a minute man at night. Once, in the cold winter of 1965, he did a home visit to see me. I had a fever. He gave my mother an antibiotic for me and assured her not to worry. Before leaving, my mother kindly asked Dr. Lombardo to please sit down and enjoy some of her homemade fettuccine with red sauce and meatballs. It was the gracious Italian way, paisano a paisano, un ringraziamento, (countryman to countryman, a thanks or gift). When Dr. Lombardo warmly declined, my mother pleaded with him in Italian, insisting he stayed. Dr. Lombardo relented, did the gracious Italian thing and ate two of my mother’s meatballs. It was one of my mother’s fondest memories.

In 1940, he married Lucia Salibene, who died in 1952. The following year, Dr. Lombardo married Roslyn Viverto-Kaczmarski, with whom he traveled the world, visiting all seven continents together. She died in 2010. After enjoying 25 years of retirement, Dr. Lombardo passed away on October 10, 2017. He was 100-years-old.

Dr. Lombardo was the past president of E.J. Meyer Pediatric Alumni Association and was also on the faculty of the State University of New York at Buffalo School of Medicine. He was also a past president of the Romulus Club and the Bacelli Club.