On the Cover: A Snowplow for Capracotta 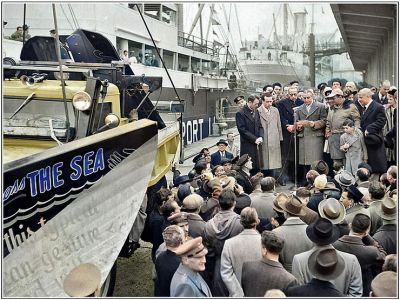 In the days of my grandparents, winter often meant that a second story window became their front door. They were born and raised in Capracotta, in the High Molise, where heavy snow can begin piling up in October and last until May. In 2015, the town broke the world record for the greatest snowfall in a 24-hour period: 101 inches. So, you can imagine the challenges facing the vulnerable population situated at almost 4,700 feet above sea level, including entering and leaving the house.

By the end of WWII, Capracotta’s only mechanical snowplow lay in ruins, a victim of the German occupation. “We’re back to prehistoric times,” one Capracottese sadly remarked. In the trying postwar years the town’s citizens could not access hospitals, medicines and food supply chains. Without the means to clear deeply impacted streets and thoroughfares, a typical winter blizzard could stop weddings, funerals and the postal service. For months, the town was sealed off from the outside.

But help finally arrived thanks to former resident Eda Di Nucci’s alarm at the condition of her hometown. After returning to her Jersey City residence from a trip to visit relatives in Capracotta, Di Nucci spread word of the desperation she had encountered there. A committee was formed and the city’s large Capracottese community jumped into action. In no time, Capracottesi communities in nearby Burlington, NJ, Bristol, PA and elsewhere joined the effort to help the town purchase a new snowplow.

Encouraged by the activities of immigrants in America, Capracotta’s mayor sent an urgent appeal to Jersey City mayor, John V. Kenny. It read, in part:

“We, in this town, have an urgent need of a snowplow–it could be old, it doesn’t matter– in order to free the roads that lead from Capracotta to the outside world. [During the war,] one day Nazis troops entertained themselves by reducing the snowplow we once had to pieces. It was so useful and indispensable. Might the good people of Jersey City adopt the town of Capracotta? Might they respond to our prayer of making sure we have a snowplow?”

Kenny responded, authorizing his city’s participation in a fund drive to send help to Capracotta. His intervention made possible the assistance of U.S diplomats and others. A fundraiser took place in 1949 that brought Frank Sinatra, Jimmy Durante and former heavyweight boxing champion James J. Braddock to Jersey City. The effort raised $20,000 to buy a snowplow, soon invested with the name “Clipper,” and to pay for its transport to Italy. The committee even purchased a roundtrip ticket for Armond Gaito, a Jersey City bulldoze operator, who spoke Italian and would train the town’s mechanics in the operation of the Capracotta Clipper.

When the campaign to secure the funds successfully ended, Capracotta would receive its snowplow as a Christmas gift from the Italian American community. Before its Boston departure for Europe, Mayor Kenny set up the newly purchased snowplow in Jersey City’s town square as a proud sign of his city’s participation in the solidarity effort.

Arriving at the Port of Naples on January 14, 1950 the snowplow was received by American ambassador James Clement Dunn and dignitaries of the two countries. Two days later, it arrived in Capracotta to a thunderous welcome. Schools closed. Poetry and songs were composed in its honor. The entire town came out for the festive occasion, some in traditional costume. Joe Paglione, then a 10-year-old student at the time, will always remember his participation in that day’s festivities, how authorities and the townspeople lined up in front of St. Anthony’s church, where he and his companions sang two beautiful songs especially written to welcome the Clipper, one in dialect and the other in Italian. Confetti filled the air.

Many years have passed, and several snowplows have occupied the Clipper’s parking spot in the municipal garage. But the storied snowplow still resides in Capracotta, where, from time to time, it makes a ceremonial pass down the town’s streets. How many lives did the Clipper save? How many fortunes did it make possible by reopening access to the town? These may be unanswerable questions. Perhaps the best question concerns how we continue the practice of solidarity in a world so much in need.

Many thanks for help in retelling this story:

Tweet
More in this category: « Yogi Berra, the Early Years A Look Back: The Sweet Carnival in Venice »