A Look Back: The Sweet Carnival in Venice 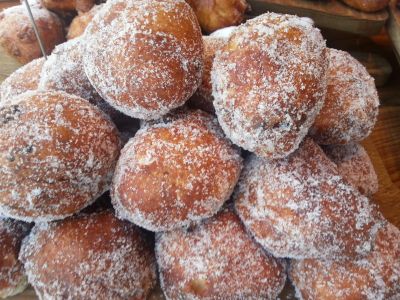 Winter is here and it has been cold. We hope you are all well and we can all gather together for our favorite events and holidays soon. We hope you enjoy this article by Paul Sciria from February 2015. We would love your thoughts on the paper and how we can make it better.  Please email me directly at This email address is being protected from spambots. You need JavaScript enabled to view it..

Never before [during Carnival] does the proverb "Semel in anno Licet insane" (once a year you are allowed to go crazy) seem to fit the reality of what happens when a whole city falls into celebration; not only with its masks and wonderful costumes, but also with the arrays of sweet treats displayed by all the local bakers and cake shops. It is a sheer delight for all gourmets and for those who would tend to avoid excess calories. During the Carnival, it is virtually impossible to resist all the sweet temptations which abound in all corners of the city, in the form of galani (sweet, deep-fried, thin, short crust pastry strips) or frittelle, the authentic Venetian puffed, sweet dumpling stuffed with sultanas, with patisserie cream or zabaglione, sprinkled with an intangible, but dazzling sugar icing, sometimes slightly scented with vanilla.

But, as with any self-respecting party, during the Venice Carnival, the Queen of cakes is the Frittella. The oldest recipe is given by Bartolomeo Scappi who used to be the private chef of Pius V. The Venetian Historian Giovanni Marangoni writes that [by the 17th century] the frittella became the "national cake of the Venetian State." In Venice, the fritole were considered the national dessert, right back from the days of the Serenissima Republic, and you could taste them not only in Venice but throughout the Veneto region of Friuli, up to almost the outskirts of Milan.

The fritole, the undisputed queen of Venetian sweets, was produced in the various streets of the city, as well as in homes and bakeries, but mostly in wooden square-shaped huts.

The fritole were prepared by the fritoleri, who were both producers and sellers. In the [16th century], the fritoleri, to emphasize their exclusivity to this delicacy, formed an association composed of 70 fritoleri, each with its own area where they could exercise this particular business and each one of them could pass on the license exclusively to his children. The corporation remained active until the fall of the Republic, though the art of fritoleri definitively disappeared from the streets of Venice only in the late 19th century.

"They always have a sort of a diaper in the front which resembles a woman's apron and which appears to have just come out from the laundry. They hold in their hands a jar with holes with which they throw sugar on the goods, but which at the same time seems to say: who can smell and taste what we are sugaring?" This is the way they were described by their contemporaries. In the early 19th century, the recipe was described in verses indicating the rules which have remained famous, "They must be very tasty; well-cooked and well raised. A little sugared, cold or hot, as you please."

Even if the only real frittella remains the Venetian one (stuffed with raisin and candied peel), all over Veneto different local recipes have spread. Nowadays you can find those dipped in batter made with fruit, flowers or vegetables, in some cases with weeds and grass of the mountain, and even with rice and polenta. But the influence of fritoe spread to other cultures so that there is even a Jewish frittola which the Venetian Jews still prepare for the Feast of Purim.

To taste these typical Venetian cakes is a must for Carnival, perhaps if you accompany it with a good hot coffee or hot chocolate to warm up the cold nights of February, or with a fresh, sparkling Prosecco, a Venetian wine ideal as an aperitif or with dessert.

This is one of our recipes, the real Venetian Frittella!

Dissolve the yeast in a little warm water with the sugar. Add this to the flour, along with the eggs, lemon zest and a pinch of salt. Start mixing and slowly add a little milk at a time, until the dough is smooth and soft. Keep mixing until you see bubbles appearing. Cover the bowl with a wet towel and leave to rest for 2 hours in a warm place.

After 2 hours, add the raisins (not the juice they released) to the dough. Make some little balls and fry them in a deep pan with hot oil (if the dough is too soft and you cannot make the balls, use a small spoon to pour the dough in the hot oil). Take the little fried balls out of the hot oil as soon as they are a nice golden colour. Don't fry too many balls at the same time, they will burn on the outside and will not cook on the inside.

Drain the balls on some kitchen paper, serve them warm, covered by icing sugar. Best eaten the same day and with a nice glass of prosecutor wine.

Tweet
More in this category: « On the Cover: A Snowplow for Capracotta The Life of Richard Crenna »