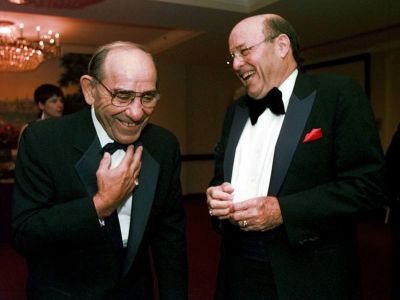 Yogi Berra was only 16-years-old when the Japanese attacked Pearl Harbor. Like many American teenagers, he felt that he had a score to settle for the devastating attack against our servicemen, killed by the Japanese.

Although many baseball players chose to play baseball during WWII, Berra put his career on hold and enlisted in the U.S. Navy in 1943. During his time in the military, Berra earned a Purple Heart, a Distinguished Unit Citation, two battle stars, a European Theatre of Operations ribbon, and the Navy’s Lone Sailor Award.

Berra’s parents were Italian immigrants Pietro and Paolina. Pietro was from Malvaglio, near the city of Milano, in northern Italy. Arriving at Ellis Island on October 18, 1909, Pietro was a 23-year-old Milanese. Pietro left Paolina, his girlfriend at the time, behind. After earning enough money, Pietro paid her way to the U.S. Paolina Longoni arrived on March 10, 1912, at the age of 18. Pietro and Paolina married each other 9 days later and settled in St. Louis.

Yogi was born Lorenzo Pietro Berra on May 12, 1925, in an Italian neighborhood of St. Louis, which is known as The Hill. Legendary baseball player Joe Garagiola grew up in the same neighborhood as Yogi. In fact, they lived directly across the street from each other on Elizabeth Street. The two youngsters spent a large amount of the time playing games with other boys in the neighborhood and their favorite sport was baseball. They also enjoyed going to the movies.

Tweet
More in this category: « The First Italian American First Lady in U.S. History On the Cover: A Snowplow for Capracotta »