The Story of Corado Ciarlo 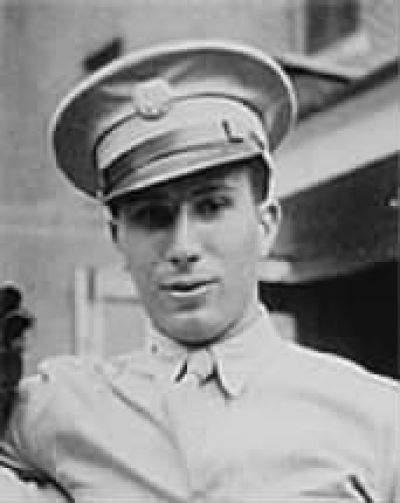 Corado Ciarlo was only 20-years-old when he was killed in battle. In his pockets, they found two rosaries, $1.61, 16 photographs of family members, and one letter. While the other items were important, the letter held the greatest value.

After emigrating to the U.S. from Italy, Tommaso and Martina Ciarlo settled in Waterbury, CT. Tommaso ran a thriving grocery store until his untimely death in 1937 left Martina alone to raise Corado and his four siblings. By 1941, Corado had graduated from Leavenworth High School. Like many young men of his era, he wanted to join the military, but was convinced it was a bad idea by his mother. Instead, he began working at the Waterbury Steel Ball factory. Despite his mother being against it, he decided to join the U.S. Army in 1943.

Corado fought in Italy in WWII in 1944. During this time, he maintained a steady flow of letters to his family, most addressed to his widowed mother, Martina. She constantly worried for her son's safety. Corado knew how worried that his mother would be if he wrote about his wartime experiences. To protect her, he focused on topics such as swimming in the Tyrrhenian Sea, the lovely weather and the delightful Army food. He successfully hid the hell that he went through.

Corado fought hard in Italy in 1943 and 1944. Although many of his fellow soldiers were being killed in battle, his letters home painted a different picture. He did not want to make his mother sad. In late March 1944, as the fighting escalated, Corado's thoughts were of home and family. His March 20th letter focused on Easter and the need to have a plant placed on his father's grave. Two days later, another letter home mentioned the weather, but it said that his family's concerns for him were unnecessary as well. His April letters said that with all the eating and sleeping he was doing, he would be huge. Corado's primary concerns were for his family, especially his Italian mom. He let them know that he was fine, even though he was definitely going through a tough time.

In what may have been Corado's final letter home on May 19th,, he thoughtfully continued not to mention the hell that he was going through. He asked his mother how she was doing and if she was happy. The letters stopped coming in June 1944. His family learned on June 26th that Corado had been killed in action near Artena, a city southeast of Rome, on May 27th. He was eight days shy of his 21st birthday and had served in the Army for one year, one month and one week.

Martina refused to accept the devastating news. For months, she would scan the newspapers for photographs of soldiers, desperately hoping to see her son. This lasted until the day she went to the cemetery with her family and was handed the folded flag of the United States of America.