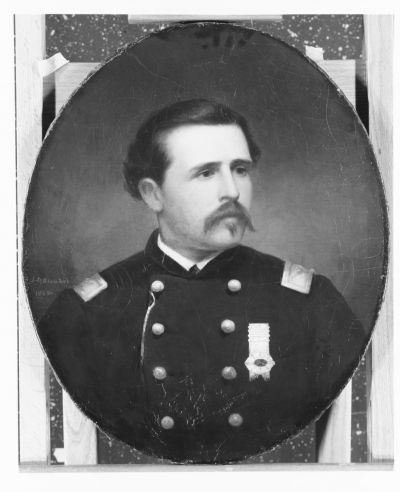 What do you think of when you hear the phrase Italian American? I believe most people think of the Northeast; Boston, Pittsburg, New York. Images of Ellis Island come to mind. We think of the end of the 19th century, the time of the Italian diaspora, latecomers to the American dream. It is bothersome that some think the Italian American experience did not begin until well after the U.S. had proven itself as a nation. Italians have been an integral part of the development of our culture and values since its discovery and colonization. From the American Revolution to the wars in Iraq and Afghanistan, Italian Americans have fought and died. One such Italian American partriot is Luigi Palma Di Cesnola.

On July 23, 1832, in Rivarolo Canavese, Italy, Luigi Palma Di Cesnola was born the second son of a count in the Kingdom of Sardinia. Unfortunately, the second sons of counts do not inherit any sort of title; that goes to the older brother. While popes commonly promoted members of prominent families to Cardinal, the adventure-seeking Luigi was not well-suited to ecclesiastical life. Besides, his family was considered a minor noble Piedmont family not having the clout to come to the notice of the pope. Perhaps inspired by his uncle, Alerino Palma, a patriot who supported the Italian Republic, Luigi left home at 15 to serve in the First Italian War of Independence. After the battle of Novara on March 23, 1849, he was promoted to the rank of second lieutenant and decorated for bravery. Unfortunately, when he was 20-years-old, he was dismissed from the army. Some say the dismissal was due to debt while others maintain it was the result of an illicit affair. This was the first of several controversies throughout his career.

After serving as the aide-de-camp to General Enrico Fardella with the British Army in the Crimean war, Luigi immigrated to the U.S. in 1858. Then in 1862, he joined the 4th New York Cavalry severing as a Colonel in the fight to preserve the Union. On the eve of the battle of Aldie, Cesnola was stripped of his saber and sidearm, then arrested for protesting the promotion of a less experienced officer. Once the battle began, however, his regiment would not charge a hillside gun battery without him. The commanding general, recognizing the urgency of the situation, released Cesnola from arrest. According to official reports, when the Colonel entered the battle “the regiment arrived on the scene of conflict, and by a gallant charge, turned apparent defeat into a glorious victory for our arms, completely routing the enemy and cutting off nearly 100 men, all of whom were captured.” Later, he received the Medal of Honor for his bravery. Sadly, during the battle, Cesnola was wounded and pinned by one leg beneath his horse. He was captured by the confederates and held in Libby prison until 1864 when he was released as part of a prisoner exchange.

After the Civil War, Cesnola continued to serve his adopted country accepting an appointment as the United States Consul to Cyprus. In the years 1865 to 1877, while in Cyprus, Luigi became an avid archaeologist. Conducting numerous excavations, he discovered roughly 35,000 artifacts which were subsequently purchased by the Metropolitan Museum of Art in New York in 1872. Then in 1879, he became the first director of the museum maintaining that post until his death in 1904. There was controversy even at this point in this life. The art critic Clarence Cook questioned the genuineness of Cesnola’s Cyprian restorations. Although a special subcommittee ruled in his favor, the accusation alone was enough to create doubt in the minds of some.

Luigi Palma Di Cesnola in many ways is the personification of Italian Americans. He was a colorful adventurer, larger than life (as the expression goes) while at the same time being a man of great intellect. He not only fought and bled for our country, but he also contributed to the richness of our culture. While an honorable man, he seemed to generate a fair share of controversy, just like so many Italian Americans.

Tweet
More in this category: « I Am Who I Am: Nacy Panzica The Story of Corado Ciarlo »