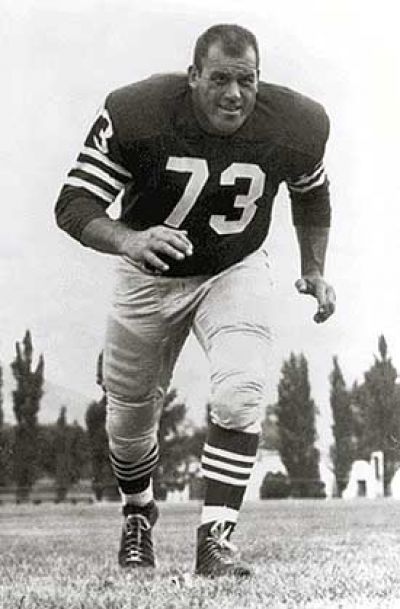 Leo “The Lion” Nomellini, a star tackle for the San Francisco 49ers from 1950 to 1963 and a member of both the Pro Football and NWA Wrestling Hall of Fames, is forever remembered as that tough and gritty Italian kid. The all-around athlete was born on June 19, 1924 in his native town of Lucca, Italy.

Nomellini immigrated to Chicago as an infant. He dropped out of high school early on to work in a foundry to help support his family. Leo did not have the chance to play high school football, his true love as a youngster. His family came first.

Leo played in his first football game while stationed at a Marine base in North Carolina as a member of the Cherry Point, NC Marines team during WWII. After serving in the Pacific, Nomellini returned from the war effort to develop into an All-American football player at Minnesota and was named to the College Football Hall of Fame in 1977.

Nomellini played in 174 straight regular-season games and 266 pro contests and he was the number one draft choice of the 49ers in 1950. The “Lion” had everything necessary to be a successful pro football player: a large stature at 6 foot 3 inches and 260 pounds, speed, agility, aggressiveness, dedication to the game, superb conditioning, and the willingness to go the full 60 minutes of any game.

Sometimes he played both offense and defense, garnering him much respect among his NFL peers. Nomellini was one of the few players ever to win All-NFL recognition on both offense and defense. He was named all-league at offensive tackle in 1951 and 1952 and then received All-NFL honors for defensive line play in 1953, 1954, 1957, and 1959. In 1969, he was inducted to the NFL Hall of Fame. In 1979, Nomellini was also inducted into the National Italian American Sports Hall of Fame.

When he finally retired at age 39 after 14 years of play, Nomellini was labeled “indestructible,” a brand he truly earned and appreciated. “I really like to play football. It’s tough and it’s hard and no pro football owners can pay a player enough for the punishment they take. You just have to like it – and I do,” Nomellini said.

Leo was lured into the wrestling ring during off-season. After retiring from the 49ers, ready to again seize his power and strength, Nomellini became an instant success and a wrestling superstar in Northern California. Later in his wrestling career, officials signed him to a much anticipated match with the World’s Wrestling Champion, Lou Thesz. Nomellini won by disqualification and walked away with the NWA Championship. However, the decision was reversed and Thesz remained the champ. That decision would always be remembered by the fans, clamoring that Nomellini was robbed of the championship belt. Nomellini was inducted into the NWA Hall of Fame in 2008.

After Nomellini’s passing on October 17, 2000, former 49ers quarterback, Y.A. Tittle, Leo’s teammate from 1951 to 1960, said “Let’s just put it this way: Leo was one of the kindest, gentlest, biggest, toughest men you’d ever want to meet. He was big and strong, a weightlifter. More than that though, he was a great human being. He never had any bad things to say about anyone. He wasn’t a gossiper…He was a guy you could poke fun at and he’d poke fun at you. He’s a friend I hate to see go.”

Former Viking Bob St. Claire had a particularly close friendship with Nomellini. “We were close, very close,” St. Claire recalls. “You know he was born in Lucca, Italy and raised by his Italian grandmother in Chicago. Every time we’d go to play the Bears, we’d go over to his grandmother’s house and they’d stuff us with good Italian food. We’d end on the living room floor, we were so stuffed.”

Former 49ers teammate, Gordy Soltau who played with Nomellini at the University of Minnesota said, “He was a great teammate and one of the best linemen we ever had. He loved to play and he loved people.”

Leo Nomellini is another example of an Italian immigrant who achieved great sports fame in America.