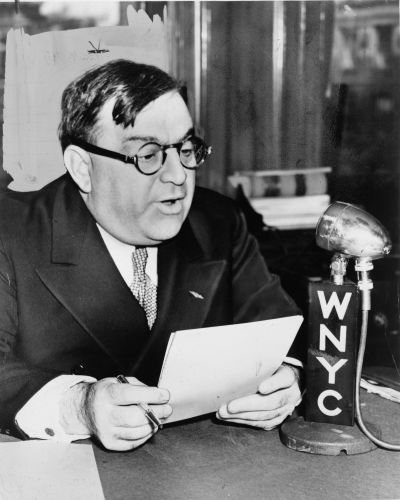 He could speak English, German, Croatian, Yiddish, and Italian, and became one of the most revered of big city mayors in United States history. Fiorello (Italian for little flower) La Guardia, is remembered for his ambitious policies that successfully guided New York City through the Great Depression and WWII. A native New Yorker, son of a Catholic father and a Jewish mother, he modernized the Big Apple’s infrastructure, revitalized its political life and created a civil service anchored in merit, not patronage.

From 1907 to 1910, he worked as an interpreter at Ellis Island’s immigration inspection station while attending law school at night. This period of La Guardia’s life, though seldom reported on, hints at his future popularity and success. The multilingual La Guardia was in much demand for his language skills. The maze of inspection stations and the many questions that had to be answered overwhelmed those recently arrived from Europe’s rural villages. Many were Jewish refugees escaping pogroms in Russia or Italians fleeing the extreme poverty of southern Italy. They had bet everything on attaining entry into the U.S.

Part of La Guardia’s service at Ellis Island occurred under Commissioner of Immigration  William Williams, who had been hired by President Theodore Roosevelt to weed out rampant corruption in the port of New York. Employees often exacted bribes from immigrants for the promise of overturning the negative results of a medical exam. Criminals called “runners” gained access to the Island where they sold newcomers bogus train tickets and practiced other scams.

Immediately after his appointment, Williams began the cleanup of Ellis Island. In addition to attacking crime, the reform-minded commissioner believed that too many “undesirables” were gaining entry to the US. He was particularly fearful that Jews and Italians would become public charges if allowed in. In fact, Williams’ pronouncements caused much consternation among immigrant aid societies and his approach often reflected a common belief of the time that southern and eastern Europeans were inferior to the old stock of immigrants and thus less likely to become successful future citizens. His restrictionist reform efforts took on the appearance of anti-Jewish and anti-Italian bias.

“The new immigrants, unlike that of the earlier years, proceed in part from the poorer elements of the countries of southern and eastern Europe and from backward races with customs and institutions widely different from ours and without the capacity of assimilating with our people as did the early immigrants.”

At the time, first and second-class passengers arriving at New York’s port were examined onboard in their cabins and then authorized to disembark. Steerage class passengers, on the other hand, were ferried to Ellis Island where they went through a series of rigorous inspections and medical examinations before they could be registered and released. Anyone found with a contagious disease was quarantined and sent back to where they came from.

Each day, thousands filed through the huge reception building under the keen eyes of immigration officials poised to pick out anyone showing signs of physical or mental impairments. It was taken for granted that men from steerage class would earn their living in the U.S. through manual labor. Accordingly, deportation to the home country could be the fate of a working age male exhibiting paralysis, loss of a limb, poor eyesight, missing fingers, or even a limp. Families risked being split up when all but one member passed a medical test. Yet everyone had the right to appeal exclusion to a board of special inquiry on Ellis Island.

Compassion for desperate cases drove La Guardia to provide legal help. Leaving his job as an Ellis Island interpreter in 1910, and now a young lawyer, he represented those who were appealing forced repatriation. Previous experience as an interpreter convinced him that too many immigrants were being rejected on the basis of their nationality, rather than on a fair reading of medical and other reports. On occasion, his practice took him all the way to Washington, D. C. to prevent family separation and other dire outcomes. Not surprisingly, Fiorello La Guardia rapidly developed a reputation for helping immigrants enter the U.S., and he won the respect of newcomers of many nationalities and their communities.

Building upon support from the large immigrant community in NYC, La Guardia won election to the House of Representatives, but soon left to serve as a pilot in the U.S. Army Air Service in Europe during WWI. There he attained the rank of commander. Upon return to the U.S., he easily won a second term to the House. La Guardia’s solid record in public service reached its zenith in 1933, when he won election to the office of Mayor of New York City. Serving until 1945, the “Little Flower” built cross-party and multi-ethnic alliances to revitalize the city hard hit by corruption and the Great Depression. Though a lifelong Republican, he was a supporter of Democrat Franklin D. Roosevelt’s New Deal and received much help from the four-term president. When La Guardia left office, it was hard to find a large American municipality as well run as his.

In the early decades of the 1900s, NYC contained the largest concentration of foreign born in the country. Hundreds of thousands were naturalized or in the process of becoming U.S. citizens. In the giant metropolis lived more Italians than in Naples, more Irish than in Dublin and more Greeks than in Athens. The nation’s largest city was built by immigrants, many of whom would have been sent back to their native lands if restrictionists, like William Williams, had held absolute control of Ellis Island. Fiorello La Guardia believed that immigrants were building America. They continue to do so.