Author Marco Rizzo on Immigration, Graphic Comics and Much More 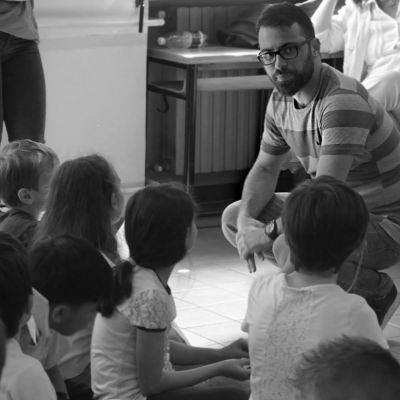 Marco Rizzo is an award-winning Sicilian journalist, cartoonist and writer who has published essays and several graphic comics. He is considered by some the most prolific and acclaimed Italian comic book writer in the field of graphic journalism. Contributing writer Francesca Mignosa spent time with Marco and shared a portion of their conversation with La Gazzetta Italiana.

Francesca V. Mignosa (FVM): We met at a literary festival in Catania in 2016 where you were presenting your children's book "Immigration Explained to Children." Being Sicilian-American, I was fascinated by the theme, simplicity and depth of your messages. Where and how was this book born?

Marco Rizzo (MR): It came to me, as it often does, in the wake of another book. Before "Immigration Explained to Children," I had written another book for children dedicated to the mafia. It was about Peppino Impastato, a young journalist and activist killed by the mafia in 1978. I was invited by elementary schools to talk about Peppino, but I felt that I needed to clarify to children what the mafia was first. Once "Mafia Explained to Children" was published, I noticed that many of the questions that were being asked by children actually concerned immigration. It is a theme they hear about in the news and see the effects in multi-ethnic schools even in the smallest cities in Italy. It was born, in short, from the curiosity of children.

FVM: Where did you complete your degree in Graphic Journalism and how was this interest born?

MR: I studied as a journalist, earning a degree and a master's degree from the University of Palermo and then doing a lot of internships at local and national newspapers. Then, I simply applied the rules of journalism to a language – comics – following the example of great authors like Joe Sacco, perhaps the father of Graphic Journalism.

FVM: How was it working with one of the greatest writers of our time, Andrea Camilleri, together with your colleague Lelio Bonaccorso on the 51 illustrations of Camilleri's work "Gli Arancini di Montalbano" for La Gazzetta dello Sport?

MR: It was a nice collaboration. Lelio Bonaccorso and I created the concept of the illustrations that Lelio then designed. We know that Andrea liked them. It was a great honor and a pleasure to know that he was satisfied.

FVM: In 2018, your most recent graphic novel "Salvezza" (“Salvation”) was published. It is about your 3-week experience with your colleague Lelio on the migrant rescue ship, Aquarius. Tell us about that.

MR: “Salvezza” is a comic report, a fairly classic example of Graphic Journalism. Lelio and I wanted to see with our own eyes how the sea rescues work, what the rules are, what the responsibilities of Libya are. After collecting testimonies for the book "Immigration Explained to Children," we wanted to learn more about that "first contact" between those who flee from war, hunger and persecution and the Western world that saves them from sea traffickers. We also wanted to interview many migrants, to collect the most diverse stories and understand the reasons why they face such a risky journey. At the same time, we wanted to interview doctors, rescuers and psychologists who provide on board help to these desperate people. In a world increasingly full of hatred, superficiality and fake news, we wanted to try to dismantle hatred, narrate without superficiality and deny fake news. We came back more informed but also angrier than before. We have discovered that governments and the media tell us a lot of nonsense and that these delicate issues are now used mainly to campaign on the skin of those who cannot defend themselves.

FVM: You are originally from Trapani and live there now. Can you tell readers about your connection to your homeland, Sicily?

MR: I love and hate Sicily like all Sicilians and this strong contrast feeds the passion that Sicilians bring into personal relationships, art and work. It is a region that represents a bridge to Africa and with a very rich history made of migrations and immigration. Sicily is at the center of the Mediterranean and has been at the center of the world for a long time. Today, it is a very beautiful land cursed by a few who muddy its name and cover its beauties. I have lived elsewhere but I have always returned because I am tied to the sea, to my land, to my family. I also think I'm lucky because I can do my job from anywhere in the world but I choose to stay. If we all go away, we leave this land in the hands of villains.

FVM: In Trapani, immigrants arrive daily, especially from Africa. How do the people of Trapani live with this delicate phenomenon? How are migrants welcomed into your community?

MR: Trapani has a deep bond with Africa. It is closer to Tunis than to Rome, it has an ancient Maghreb community, it was even founded by the Carthaginians. Our typical dish is couscous and the architecture is reminiscent of a city in North Africa. In Trapani in the last few years, several [migrant reception] centers have been created, perhaps too many. They have brought work for many professionals but there have also been scandals concerning bad management. Some migrants, then, work in the lands around the city, to pick tomatoes or grapes and are often exploited by the mafia. Furthermore, the anti-migrant propaganda has left its mark even in this land that is full of people who have migrated or have relatives and friends who are looking for or have sought work abroad. Fortunately, so far, no social tension has exploded.

FVM: You have recently completed an Italian tour of schools and other events where you presented your book "Salvezza." What were some of the most important stops of your book tour?

MR: We met a lot of young people all over Italy and we found them curious, passionate and often without prejudice. A meeting in particular in Lampedusa, an Italian island very close to Tunisia, was very important. We met Pietro Bartolo, one of the island doctors who has visited hundreds of thousands of migrants and who can tell atrocious stories and stories of hope.

FVM: What projects do you have in the pipeline at the moment?

MR: A sort of sequel to “Salvezza.” We have traveled around southern Italy, in particular Calabria, in search of stories from migrant reception centers. The laws that manage them are becoming more complicated and hinder the work of the centers making integration more difficult. We plan to share our findings.

MR: My Facebook page, Marco Rizzo. I believe that Facebook, which is often a vehicle for fake news, can also be a means to stay informed. In my small way, I try to do my part with reports that I only publish there. You can also visit my website www.thewarbulletin.com.