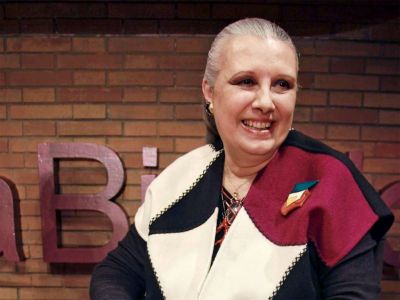 Laura Biagiotti was nicknamed the “Queen of Cashmere” and assuredly contributed to the success of Italian fashion around the world. She told the media, “Being a fashion designer is like taking vows. It becomes your religion for life.” Deeply proud of Italy and being Italian, she wore cashmere shawls in red, white and green for years and was convinced that the “Made in Italy” label was like a gold mine.

Biagiotti passed away recently in a Rome hospital. She was 73. She was renowned for her soft, loose women’s clothes, luxurious knits, plus-size women’s line, a children’s line, and accessories including sunglasses, perfumes and her popular “Roma” fragrance.

In her younger years, she studied to be an archaeologist but, in the 1960s, gave that up to join her mother’s dressmaking and tailoring business. Alitalia flight attendants wore uniforms created by her mother Delia. Early on, Laura traveled often to the U.S. to learn more about the technology of the business and collaborated with American fashion houses. She introduced her first collection at the Sala Bianca in Florence in 1972.

Among fashion houses, she was a generous supporter in sponsoring restoration of monuments.

Biagiotti lived in a restored 11th century Marco Simone castle on a hilltop outside Rome which also served as headquarters for the family business of which her daughter, Lavinia, is vice president and creative director. Her husband and business partner, Gianna Cigna died in 1996.