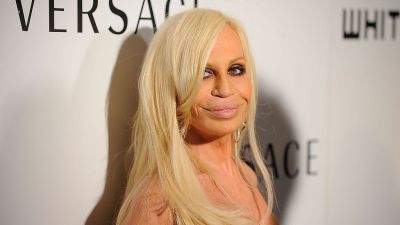 The Versace name is one of the most recognized names in the fashion industry. At the head is chief designer and 20 percent owner, 62-year-old Donatella Versace. After a brief time studying in Florence, Italy, she joined the Versace team in the mid-1970s to work for her brother, Gianni, in the PR department of his clothing business in Milan. That advisory/advertising role converted into learning about designing, ultimately fine tuning a skill that she and brother Gianni acquired from their mother who had a dress-making business. Donatella would later say “mamma made her the best dressed little girl in the city.”

Today, Donatella oversees production of dozens of collections for some of the “best-dressed women worldwide.”

Celebrity friends help establish the Versace label as clients and in advertising campaigns such as Beyonce’, Madonna, Demi Moore, Lady Gaga, Christina Aguilera, and Jennifer Lopez. Donatella’s parties with A-list celebrities also helped spread the label’s name across Europe and the U.S.
The Versace company has expanded product lines into other businesses including hotels and villas with lavish rooms, beddings and furniture.

The Versace family roots extend to Reggio Calabria where Donatella was born on May 2, 1955.

Tweet
More in this category: « Francesco Petrarch: A Poet and Scholar in the Month of July Biagiotti – It’s Cashmere – 'Vow'! »