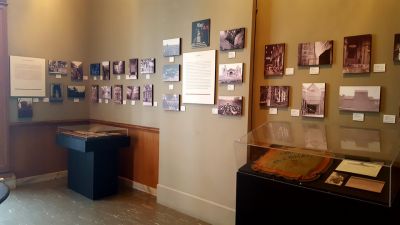 Visitors to the Cleveland History Center in University Circle can learn about Cleveland during WWI in the Center’s central exhibition Cleveland Starts Here®. During this centennial year of the War’s end, the CHC offers visitors the opportunity to take a closer look at the time period in a new exhibition called “A City Worth Fighting For.”

“A City Worth Fighting For” explores Cleveland’s role in WWI and the contributions of its businesses and citizens through four galleries of rarely displayed artifacts from the Western Reserve Historical Society’s military and art collections. One of the galleries contains the photographic exhibit “War & Art: The Preservation of Italian Treasures” and a display that tells the stories of two Italian American soldiers.

“War & Art: The Preservation of Italian Treasures” is a collection of photographs showing Italy’s efforts to preserve their historic architecture during the bombings of the war. The exhibit was created by the Embassy of Italy in Washington, D.C. and the Instituto per la storia del Risorgimento italiano Museo Centrale del Risorgimento di Roma. It was brought to the Cleveland History Center by the Consulate of Italy in Detroit and the Honorary Consul of Italy in Cleveland.

Among the photographs are cases containing items that belonged to two soldiers, Salvatore Artino and Frank Farinacci. Artino’s story of fighting in the Italian Army was featured in last month’s column. The souvenir handkerchief he brought back with him to Ohio is on display. Farinacci was born in Cleveland’s Little Italy to Italian immigrant parents from Gildone. He enlisted to fight with the U.S. Army and was part of the Motor Supply Train units. Visitors can see photographs and newspaper clippings of his unit’s activities and a commemorative pillowcase embroidered with “Camp Sherman” by his wife, Kathryn.

“A City Worth Fighting For” can be seen at the Cleveland History Center in University Circle during normal operating hours, which are Monday-Saturday, 10 a.m. – 5 p.m. and Sunday, Noon – 5 p.m. For more information, visit www.wrhs.org or call 216-721-5722.

Tweet
More in this category: « Nominations Being Accepted for Cleveland Italian Heritage Month Collages of the Greats »