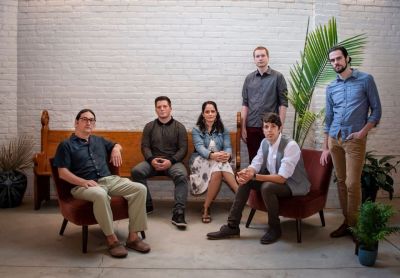 Their modern arrangements of folk lullabies, laments, hymns, and festival songs are surprising, playful, mournful, tender, and bewitching. Live performances can also be accompanied alongside projected visual images and audio samples that reveal a deeper insight to where these songs come from (Ancient Roots). Alla Boara’s dynamic music and storytelling aims to inspire audiences of all ethnic heritages to treasure their musical roots and consider historical songs’ contemporary cultural relevance.

Alla Boara also features a robust outreach curriculum that is suitable for adults and children alike and offers a set of more traditional music that can bring the right atmosphere to any Italian themed dinner or wine-tasting.

The group’s leader, Anthony Taddeo, is an accomplished drummer that has been featured on more than 30 albums as a side man. While studying at the Newschool he had the incredible honor of studying with masters such as Jimmy Cobb, Kendrick Scott, Jane Ira Bloom and Reggie Workman. He has performed alongside artists such as Ron McLure, Camila Meza, John Raymond and Dan Wilson.

Of Italian descent, (his father being from Italy) the Italian culture is something that has always fascinated him and given him great pride. But it wasn’t until his final year at the NewSchool that he stumbled upon what would eventually be the spark for Alla Boara. While doing research for a paper on global music, Taddeo came across field recordings that were recorded by Alan Lomax in 1954. Lomax is a famous American ethnomusicologist, and many are aware of his contributions from the Southern U.S., but few know that he traveled all around Italy for 6 months recording some of the most obscure folk music in the most rural areas. “I couldn’t believe that what I was hearing was Italian music. Everything was just so much more diverse and, frankly, more beautiful than anything I had heard or associated with Italian folk music before.” Anthony said about Lomax’s recordings when he was recalling hearing this music for the first time.

What followed was a 10-year journey of studying the language, culture and traditional music of Italy that culminated into the creation of Alla Boara. The first two tracks of Le Tre Sorelle reveal much of the story and mission behind troupe. The first track “Alla Boara” features an instrument not readily associated with Italian folk music, the jaw harp. An improvisation between voice and jaw harp evokes the harmonic minor sounds that one would be more expectant to find in Greece or the Middle East.

Quickly joining in are special guests Michael WardBergeman on accordion and Chris Coles on Soprano Saxophone/effects. The song is based on a traditional call and response song that was used for field work. Throughout improvisations and compositional twists, the track winds up in the fast paced triplet rhythms of the Tarantella, the strumming of the guitar matching the energetic rhythms of the tamburello drum. The song climaxes into a soaring solo by Chris Coles, his angular lines augmented using his effects pedals.

The second track, “Le Tre Sorelle”, begins with an actual sample of a field recording from Alan Lomax. The story is about a young girl who loses her ring in the middle of the sea and asks a fisherman to fish it out for her. The tale is charming and the original performance endearing. Alla Boara’s take retains that same whimsical innocence throughout. Amanda Powell delivers the story effortlessly in a way that bridges the gap between the listener and the language barrier. Toward the end of the track the talents of one more special guest are called upon as Jamey Haddad adds texture with his global percussion pallet that he is so famously known for.

“C’Avanti C’è” was traditionally an olive gatherer's song that has since been forgotten or is only known by a small few. It underlines both the importance of these field recordings and why this group’s music and mission is so important in keeping it alive. It is from the Calabrian region of Italy and the band plays a traditional Tammurriata feel for the main groove.

“Fimmene, Fimmene” is a song that is about female empowerment. Throughout the song, that would have been traditionally sung by women field workers, there are warnings about the maltreatment that these women were receiving from their bosses. The piece attempts to demonstrate the strength, struggle, and vulnerability that these incredible women might have faced.

“Funeral Lament” uses another sample from Alan Lomax’s collection of field recordings and highlights a very moving tradition that is still used in central and southern Italy today. The funeral lament is a way of grieving that pre-dates the Roman empire and would involve a type of song that you would sing to help you work through your grief. This particular lament was sung by a woman that had lost her husband years earlier, but Lomax was able to convince her to record this stirring performance. The emotion is palpable.

“Ballu” is an instrumental piece that transcribed from a polyphonic vocal tradition in Sardenia in which the vocalists’ timbres are supposed to mimic that of their livestock. Usually sung in groups of 4-5 men, each has a very specific role in the harmony and rhythm.

“Som Som” begins with a Northern Italian lullaby and is then contrasted with a song from Southern Italy that refers to the scarcity of food and poverty felt throughout much of the South. The compositional purpose behind this was to not only display the disparaging contrast between much of Northern Italy and Southern Italy, but also to remind us that no matter how bleak things get and how dark our world seems to be that we can still choose to sing the lullaby for the next generation. In other words, we as a people can still choose to pass on and believe in the hope that things will continue to get better.

“Mi Me Ne Fon” is the finale to the album and displays the playfulness of not only its composer, but of the lyric itself. It’s an 11-verse song that, on the field recording, was seemingly being sung in a bar by a group of men that may have already been a few drinks into their evening. In the song the man is relentlessly trying to pursue a lady that he fancies. The woman continually denies the pursuer and comes up with different excuses such as “I would rather turn into a nun than marry you!” to which the pursuer always has a response such as: “Then I will turn into a priest so that I can listen to your confession.” Throughout the piece the couple goes back and forth until the woman threatens that she would rather die than marry him, he responds by saying, “then I will become an undertaker so that I can burry you!” and she concludes by saying, “Then let’s get a ring and get married!”

The vision of drummer and Cleveland-based composer Anthony Taddeo, Alla Boara’s modern arrangements of near-extinct folk songs are surprising, playful, mournful, tender, and bewitching. Throughout the album are threads of Italian folk music interwoven with improvisation, modern harmonies and feels that are reminiscent of jazz, rock, and world music. It aims to bring new life and recognition to this music, but also displays that our musical heritage is still a fertile ground for new creative cultivation.