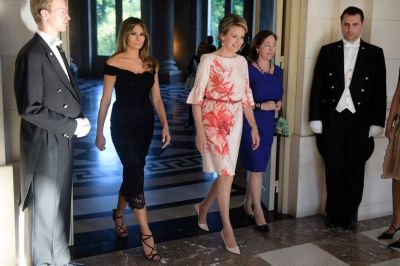 Throughout this international tour, First Lady Melania Trump was a walking billboard of high fashion houses. Always fashionable, she donned a variety of glamourous styles of the highest quality, perhaps not seen since former first lady, Jackie Kennedy.

As Air Force One took off for Saudi Arabia, the former model wore a Max-Mar sweater and a Herve Pierre pumpkin-colored leather skirt. On arrival, Melania Trump opted for a Black Jump suit by Stella McCartney coupled with a Saint Laurent belt.

Later, she shifted to a Safari button down dress by Ralph Lauren paired with zebra printed Manolo heels. That evening, she wore a purple Reem Acra gown. On the final evening in the Islamic country, she world a Dolce & Gabbana pant suit paired with a black blouse and Manolo Blahnik black pumps made of snake skin.

In Israel, Melania showcased the all-American Michael Kors skirtsuit and, again, her Manolo Blahnik Zebra printed heels. The Israeli press hailed “the statuesque former model with impeccable taste a figure on which even a potato sack would look sophisticated.”

At the Holocaust Memorial, she wore a sleeveless dress by Roksanda – the same one she wore at the GOP Convention paired with nude Manolo Blahnik heels and no jewelry except for her wedding ring.

On the trip to Rome, Melania wore a custom-made black coat with gold brocade details on her collar and sleeves designed by her favorite Italian fashion house, Dolce & Gabbana. During the visit with Pope Francis, she wore another Dolce & Gabbana creation, a somber, long-sleeved black dress with a round collar paired with a black lace mantilla and matching black Monolo Blahnik heels, and black purse with silver clasps.

As she walked off Air Force One in Brussels, Belgium, she followed the coat-belt theme. The blue and white gingham belted coat and matching dress was of the Michael Kors collection. The gingham Manolo Blahnik heels matched the look. During the NATO summit, she wore a Dolce & Gabbana lace off-the-shoulder dress.

Another attention grabber of the 14 or so fashion changes came in Taormina when she wore a floral jacket with silk flowers by the designer with Sicilian roots, Dolce & Gabbana. The going price for this designer jacket was $51,000. The matching purse with silk flowers was $1,600. She was also adorned with a cream-colored dress.

One and all agreed: “Melania Trump radiates with world-class star power.”