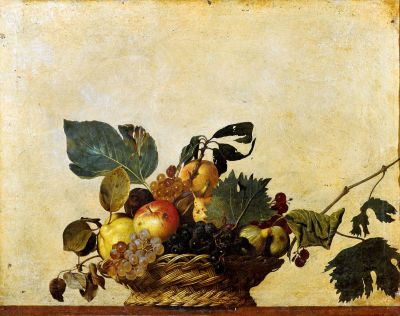 Caravaggio's still life Basket of Fruit (circa 1601) at the Pinacoteca Ambrosiana.

Standing in front of the Lamentation over The Dead Christ (c. 1483) by Andrea Christ Mantegna, in the Pinacoteca di Brera in Milan, is a moving and hypnotic experience. The museum has long recognized the importance and the fame of the painting. In 2014, the museum reinstalled the work to give it greater visibility within the collection. The person charged with creating the new installation, however, was not a curator or conservator but the Italian filmmaker Ermanno Olmi (1931-2018). Olmi had the painting's frame removed. He then created a small dark room and embedded the painting into a black wall hanging it lower to the ground than usual. Spotlighting makes the canvas appear to be almost backlit. Like it or not, this daring installation can only be described as cinematic and continues to spark debate about this iconic Renaissance masterpiece.

The controversial reinstallation of the Mantegna painting is in keeping with Milan's history as a city that both respects its traditions and history while experimenting with new ideas and innovation. Milan is a modern city endowed with famous works of art housed in many important museums, churches and private collections. Most visitors who include Milan on their Italian itinerary do so to see Leonardo da Vinci's restored mural The Last Supper (1494-1498), located in the refectory of Santa Maria della Grazie. But famous works of art by other Italian masters can be found throughout the city. In addition to the Mantegna Dead Christ, the Brera houses masterpieces of ltalian Renaissance painting, including the Pieta (c.1460) by Giovanni Bellini, The Madonna and Child with Saints (1472-1474) by Piero della Francesca, and Raphael's Marriage of the Virgin (1504). The Brera also contains important works by modern Italian painters Amedeo Modigliani, Giorgio Morandi and Mario Sironi, as well as an impressive collection of Futurist paintings by Umberto Boccioni, Carlo Carra and Gino Severini.

When you mention the word Brera in Milan, however, you are referring as much to a neighborhood as you are to the Pinacoteca di Brera located there. The quarter of the Brera in the 19th century was comparable to Paris' Montparnasse, well-known for Milan's Academy of Fine Arts, cafes, cabarets, artists' studios, and garrets.

It was also home to Milan's most famous 19th-century Bohemian movement known as Scapigliatura (literally translated as dishevelment). The major personalities of Scapigliatura included the writers Giuseppe Rovani (1818-1874) and Carlo Dossi (1849-1910); the painters Tranquillo Cremona (1837-1878) and Daniele Ranzoni (1843-1889); the sculptor Giuseppe Grandi (1843-1894); the composer and librettist Arrigo Boito (1842-1918), and his architect and novelist brother Camillo Boito (1836-1914). All were as famous for their anarchic behavior and lifestyle as for their art. In several cases, their lives ended in early deaths or suicides, with the most artistic demise belonging to the painter Cremona. Rather than mixing his lead-based paints on a palette as was the custom, Cremona mixed his colors directly in the palm of his hand, on his forearm, and thumbnail. He died a painful death at the age of 41 from lead-poisoning.

Today, the neighborhood of the Brera echoes its artistic and Bohemian past. Narrow streets with evocative names such as Via Fiori Chiari (Bright Flowers) and Via Fiori Oscuri (Dark Flowers) are home to art galleries, antique shops, intimate restaurants, and small nightclubs. In these clubs of the Brera, a popular Milanese passion is enjoyed: live jazz performances.

Several important art museums must be included in any tour of Milan, each boasting masterpieces of the first rank. The museum of the Castello Sforzesco exhibits the last incomplete work by Michelangelo, the Rondanini Pieta (1555-1564). The Pinacoteca Ambrosiana displays the Portrait of a Musician (c. 1485) by Leonardo da Vinci; Caravaggio's still life Basket of Fruit (c. 1601); and Raphael's full-scale cartoon for his Vatican fresco The School of Athens (1509). The Poldi-Pezzoli Museum houses masterpieces by Sandro Botticelli, Antonio Pollaiuolo and Giovanni Bellini.

For modern tastes, Milan boasts the Grassi Collection in the Gallery of Modern Art and the Pavilion of Contemporary Art (PAC), both across from the Giardini Pubblici Indro Montanelli and in the Museo del Novecento located near the Duomo in the Palazzo dell'Arengario.

Perhaps even more than a visual city, Milan is a musical one. And music in Milan means opera and La Scala. Milan is a city where you still feel the presence of Rossini, Donizetti, Bellini, Puccini, and, especially, Giuseppe Verdi (1813-1901). Their memories live on in street names, monuments, former residences, and, in Verdi's case, the conservatory of music that today bears his name and the Casa di Riposo dei Musicisti, home to retired and elderly opera singers and musicians which Verdi founded in 1896. It is at the Casa where Verdi himself rests next to his second wife Giuseppina Strepponi.

In the small Museum of La Scala (next to the theater), the ties between opera and Milan are eloquently stated. It is a treasure house of musical and operatic memories, most of which relate directly to the history of the theater (costumes, scores, librettos, instruments, model sets, posters, etc.). The names conjured up are legendary: Toscanini, Caruso, Melba, Callas, Tebaldi, and many more.

Even here, however, Verdi dominates. The rooms dedicated to him silence all the others. In them are his first piano, letters, and the autograph score of the Requiem Mass written in honor of his literary counterpart in 19th-century Milan, Alessandro Manzoni. Most moving is Verdi's desk from the Gran Hotel et de Milan, a few blocks from La Scala, where since the time of his death, his pens, hotel stationary, inkpot, French dictionary, and train schedule have been kept intact – as if awaiting the maestro's return.

In Verdi's earlier days, he was often seen reading his newspaper as he walked the short distance between the hotel and theater to rehearse a new opera. While on his death bed in the Gran Hotel, the citizens of Milan covered the street between the opera house and the hotel with straw to muffle any sounds of city traffic that might disturb the ailing composer.

Much of Milan's night life (and daily life) takes place in and around the triangle formed by three of the city's most important squares or piazzas: the Piazza del Duomo, the Piazza della Scala, and the Piazza San Babila. Within or nearby to this civic arena is some of the city's most famous and fashionable streets (Via della Spiga, Via Bagutta, Via Monte Napoleone); important live theaters (Teatro Nuovo, Teatro San Babila, Teatro Manzoni); bookstores (Feltrinelli, Garzanti, Hoepli, Rizzoli); and cafes and restaurants.

The monumental Galleria Vittorio Emanuele II is the main artery that connects the Piazza del Duomo to the Piazza della Scala. Designed by the architect Giuseppe Mengoni (1829-1877), it is often thought of as the city's parlor or sitting room. Inaugurated in 1877, this is where the wonders of Milan's modern architecture of iron and glass were first presented. The Galleria soon became the preferred meeting place for Milan's literati and a favorite rendezvous for the many expatriates visiting or living in the city, including Mark Twain and Ernest Hemingway, who recovered from wounds suffered in the First World War at the American Red Cross Hospital in Milan.

A lesser-known aspect of Milan is that it, like Venice, possesses a network of canals, or navigli, that were for centuries vital to the city's trade and commerce. Beginning in 2015, when Milan hosted the World Expo, the Navigli district underwent renovation and revitalization, and is now an important center of Milan night life. When Milan's contemporary achievements in urban and interior design, fashion, and commerce, are placed against its history and importance as a center for art and music, no city better identifies Italy's past with its present and perhaps its future.

This article first appeared in the NIAFs Ambassador Magazine. 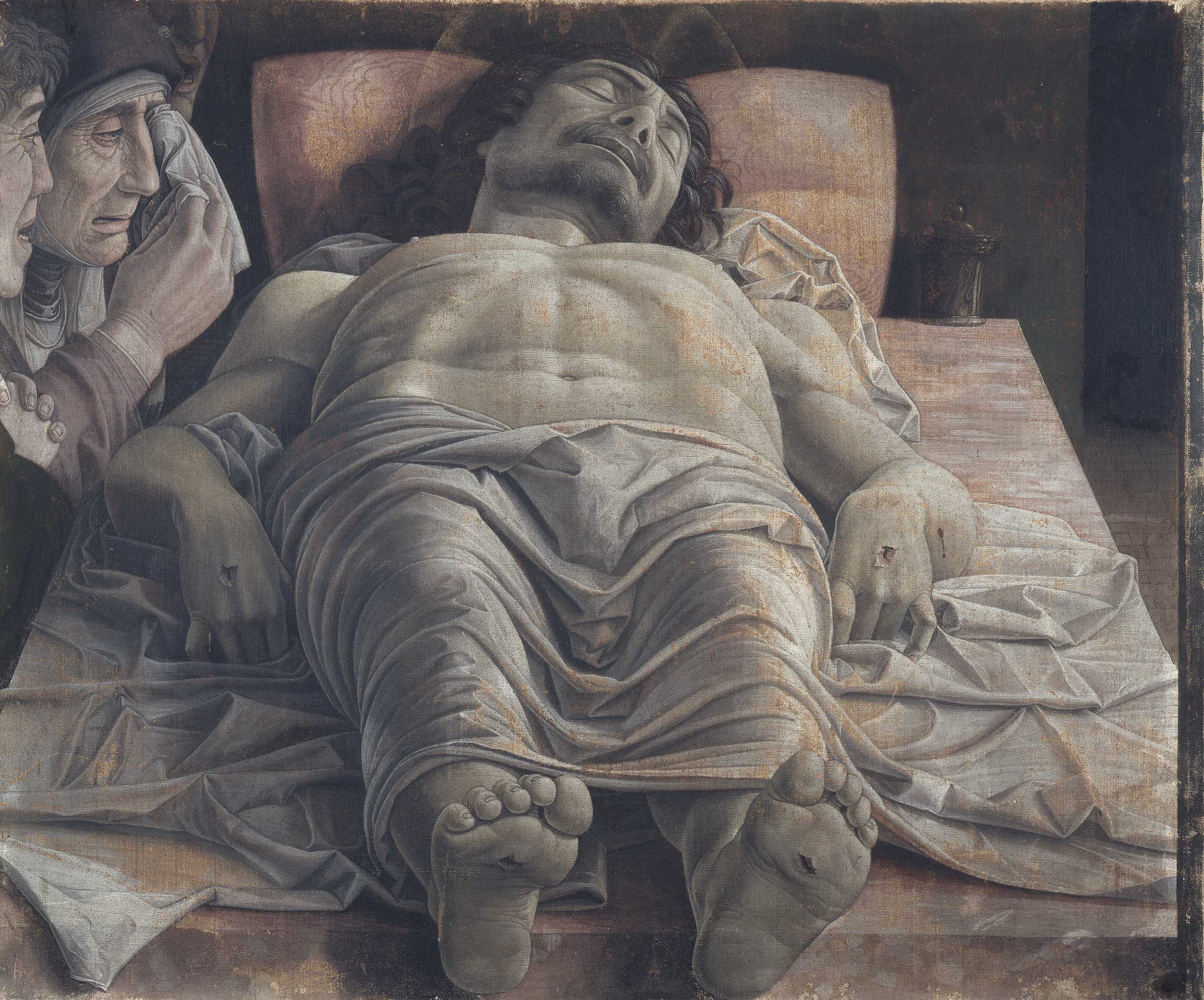 Andrea Mantegna's Lamentation over The Dead Christ (c.1483) in the Pinacoteca di Brera.

Tweet
More in this category: « Two Sonnets for All Saints’ Day by Iginio Ugo Tarchetti (1839-1869) Have Yourself a Merry Little Christmas »