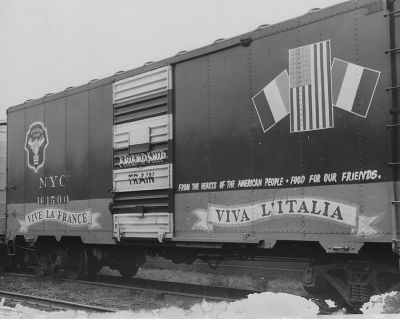 Several years after WWII, Western Europe was still recovering; and along with restoring economies, political dominance was also at stake. Towards the end of 1947, as the result of a nationwide humanitarian effort, a ship filled with cartons of food from America docked in the port of Naples.

In October 1947, popular journalist and radio show host Drew Pearson suggested Americans donate food to hungry Europeans. Because of his insider connections and his propensity to publicize much of what he heard before receiving all the details, Pearson was not well liked in Washington’s political circles. But, he was influential in steering public policy through his nationwide syndicated columns. While in Europe, Pearson saw sacks of grain being distributed by the Communist Party, and watched the joyous thankful reactions of the starving recipients.

A year earlier, the Truman Doctrine was established to mainly assist Greece and Turkey in their struggles against communism and in June 1947, the goals of the Marshall Plan (enacted in 1948) – primarily to prevent communism from spreading – were introduced. Both were government programs designed to enhance the concepts of a democracy over a socialist government.

When Pearson introduced his plan to collect food by train, a positive reaction was swift. Within a month of his appeal, the newly formed Citizens Food Committee (appointed by Present Truman in September 1947) became the sponsor of Pearson’s project, establishing a train route and a goal of 80 cars filled with food. The Friendship Train, not to be mistaken for the Freedom Train that toured America from 1947 to 1949, started its journey across America from Los Angeles on November 7.

As the train traveled the 3,000 miles to New York, it made stops in 11 states; and the states not on the route sent local trains or truckloads filled with food to depots where the train stopped. Two more trains, traveling through other parts of the country, were added. Donations were restricted to food that was easy to transport and money to buy food. Flour, dried peas, and dried beans had to be in sacks of at least 100 pounds. Pasta products and evaporated milk were in cartons of 24 boxes or cans.

School children, college students, businesses, and organizations ran fundraisers to purchase food to donate or collect money. In addition to the donated food, the railroads and shipping companies provided free use of their trains and ships, and all labor to load and unload the cartons was also donated.

On November 18, when the three trains reached New York, they totaled 270 cars and their arrival was celebrated with a ticker tape parade. The food was distributed among several ships, with the first ship leaving for France on December 7, 1947. A ship headed for Italy left the following week, arriving in Naples on December 28.

In Italy, the cartons were loaded onto four trains to deliver the food throughout the county. Pearson traveled to Rome by train, as 150 trucks transported the food cartons to the capitol city. In Rome, he spent hours holding interviews, and he received enthusiastic receptions wherever he stopped, even in the smaller towns that had not yet received their allocations of food.

The people of Italy had endured much hardship during and after WWII. The gift of food from America’s Friendship Train was a welcomed reminder that Americans cared. For more information visit http://thefriendshiptrain1947.org.

Tweet
More in this category: « Where are the Italian Superheroes? Dolci and Levi: Italian Activists »