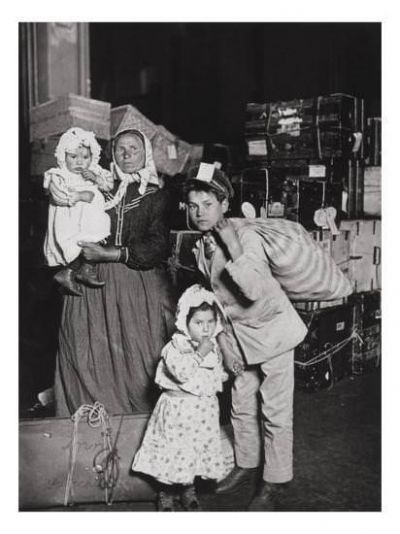 More than 12 million immigrants passed through Ellis Island between 1892 and 1954. With a peak of 1,004,756 entering the U.S. in 1907 alone, most were Italians. In fact, most Italian immigrants arriving at Ellis Island in 1907 were processed in a few hours. “It varied from person to person, but for 80 percent, the process took a few hours, and then they were out and through,” writes Vincent Cannato In “American Passage: The History of Ellis Island.” “But it could also take a couple days, a couple weeks, a couple months or, in some rare cases, a couple of years.” “At the end of the day, less than 2 percent are rejected. The process was not really to keep lots of people out; the goal was really to sift out the wheat-from-the-chaff and sift out those who ‘undesirable.’ Those who passed inspection were simply sent on their way with no official paperwork,” writes Cannato. “It’s hard a thing to wrap your mind around because we live in such a bureaucratic world today.”

In 1907, a passenger manifest document, which included each passenger’s name, was created from the point of departure. According to Barry Moreno, historian and librarian at the Ellis Island Immigration Museum, the process went something like this: “Before the ship was allowed to enter into New York Harbor, it had to stop at a quarantine checkpoint off the coast of Staten Island where doctors would look for dangerous, contagious diseases such as smallpox, yellow fever, plague, cholera, and leprosy,” writes Moreno on History.Com. “First- and second-class passengers (billionaires, stage stars, merchants, businessmen and the like) were interviewed and allowed to disembark once the ship docked. In 1907, no passports or visas were needed to enter the United; no papers were required at all. This was a paperless period. All you had to do was verbally give information to the official when you boarded the ship in Europe and that information was the only information used when they arrived,” further writes Moreno. “The passengers were put aboard small steamboats and brought to Ellis Island. First up was a medical examination by military surgeons. The doctors had to know a few words of instruction in many languages, and only 10 percent were detained for further examinations or questioning.” Those that were detained were fortunate to get the help from the Italian Welfare League. At the time, thousands of Italians had just returned to their American home after having fought in the Italian Army during the war.

The Italian Welfare League permeated into the community through immigrants who had succeeded in making a successful transition into American life as advocates and translators for those Italian immigrants just arriving from Italy, a commendable model of Italians-helping-Italians. Out of necessity, it worked remarkably. High school educated, first-generation, young Italian males with service and union jobs became a resource and advisor to Italian families: a cultural and collegial sharing, creating valuable and lasting relationships in the community. The post-WWII spirit to become helpful and honorable sons was embraced and adopted by progressive-minded Italian families.

Tweet
More in this category: « The Columbus Letters Justice Denied: Ben Shahn and the Case of Sacco and Vanzetti »