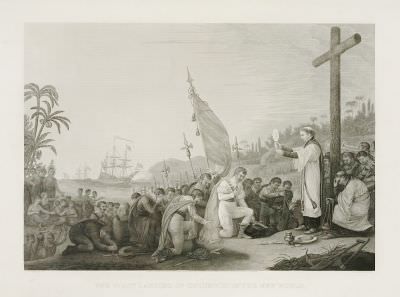 When Christopher Columbus embarked on his first voyage west, he began writing a journal, noting the course and sailing conditions. As with the letters Columbus wrote on his return trip to Spain, the journal was also hand-copied and translated and the original – so far – has not been found.

Columbus set sail from Palos, Spain on August 3, 1492, stopping at the Canary Islands and then leaving the island of Gomera on September 6 to cross the Atlantic Ocean. The journal begins “Whereas, Most Christian, High, Excellent, and Powerful Princes, King and Queen of Spain and of the Islands of the Sea, our Sovereigns …” and includes “Your Highnesses, as Catholic Christians and Princes who love the holy Christian faith, and the propagation of it, … resolved to send me, Cristobal Colon, to the said parts of India to see the said princes, and the cities and lands, and their disposition, with a view that they might be converted to our holy faith …” (excerpt from “The Journal of Christopher Columbus,” Works Issued by the Hakluyt Society, 1893).

Numerous books that provide in-depth accounts of Columbus describe him as a religious man. In “Admiral of the Ocean Sea: A Life of Christopher Columbus,” author Samuel Eliot Morison, in referring to the battle for Christianity in Europe, wrote in the Prologue, “Christopher, the Christ-bearer, would be the humble yet proud instrument of Europe’s regeneration.”

In her book “Columbus and the Quest for Jerusalem,” Dr. Carol Delany writes, “Columbus lived in a Christian, Catholic world that enveloped his life.” Her book presents a thoroughly researched view on Columbus’s belief in obtaining “enough gold for the Spanish crown to finance a new crusade to Jerusalem that could regain control of the holy city from the Muslims.”

An online article asking, “Why Did Columbus Sail?” quotes Ferdinand, Columbus’s son: “He was so strict in matters of religion that for fasting and saying prayers he might have been taken for a member of a religious order.”

In his letters sent to Queen Isabella and King Ferdinand, Luis De Sant Angel (Santangel), who helped finance the voyage, and Gabriel Sanchez, treasurer of the Monarchs, Columbus’s faith is apparent.

Therefore let King and Queen and Princes, and their most fortunate realms, and all other Christian provinces, let us all return thanks to our Lord and Saviour Jesus Christ, who has bestowed so great a victory and reward upon us; let there be processions and solemn sacrifices prepared; let the churches be decked with festal boughs; let Christ rejoice upon Earth as he rejoices in Heaven, as he foresees that so many souls of so many people heretofore lost are to be saved; and let us be glad not only for the exaltation of our faith, but also for the increase of temporal prosperity, in which not only Spain but all Christendom is about to share.

The eternal and almighty God, our Lord, it is Who gives to all who walk in His way, victory over things apparently impossible, and in this case signally so, because although these lands had been imagined and talked of before they were seen, most men listened incredulously to what was thought to be but an idle tale. But our Redeemer has given victory to our most illustrious King and Queen, and to their kingdoms rendered famous by this glorious event, at which all Christendom should rejoice, celebrating it with great festivities and solemn Thanksgivings to the Holy Trinity, with fervent prayers for the high distinction that will accrue to them from turning so many peoples to our holy faith; and also from the temporal benefits that not only Spain but all Christian nations will obtain.

Most mighty princes: all of Christendom should hold great celebrations, and especially those of God's church, at the finding of so many multitudes of people grouped together ready with very little effort to be converted to our Holy Faith, and of so many lands full of so many good things which we need, and from which all Christians will derive comfort and benefit; all of this was unknown and only spoken about in the form of fables; Your Highnesses should order great joy and festivities in the churches and especially very many praises to the Holy Trinity throughout your kingdoms and possessions, for the great love He has shown you, more than to any other prince.

For lesson plans about the Columbus Letters, visit http://italamerheritage.com/lesson_plans.htm.

Berlusconi in Hospital for Covid19

The 77th edition of the Venice Film Festival