Justice Denied: Ben Shahn and the Case of Sacco and Vanzetti 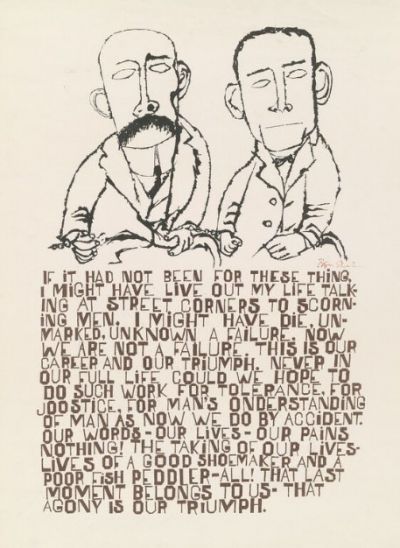 “If it had not been for these things, I might have lived out my life talking at street corners to scorning men. I might have died, unmarked, unknown, a failure. Now we are not a failure. This is our career and our triumph. Never in our full life could we hope to do such work for tolerance, for justice, for man's understanding of man as now we do by accident. Our words — our lives — our pains — nothing! The taking of our lives — lives of a good shoemaker and a poor fish-peddler — all! That last moment belongs to us — that agony is our triumph.*Statement attributed to Vanzetti by Philip D. Stong, a reporter for the North American Newspaper Alliance who visited Vanzetti in prison in May of 1927 shortly before he and Sacco were executed.

Bartolomeo Vanzetti was born on June 11, 1888 in Villafalletto in the Province of Cuneo (Piedmont). Nicola Sacco was born on April 22, 1891 in Torremaggiore in the Province of Foggia (Apulia). Sacco and his brother Sabino emigrated to America in April 1908 arriving in Boston and proceeding immediately to Milford, MA. Bartolomeo Vanzetti, traveling alone, arrived in New York in June of the same year. He too soon moved on, seeking work in various cities in Connecticut and Massachusetts. Sacco eventually found employment as a skilled worker in a shoe factory in Milford where he married in 1917 and had a son and daughter. Vanzetti never married, worked at several low-paying jobs, ultimately earning a living as an itinerant fish peddler. The two men did not meet until May 1917 in Boston during a meeting of the anarchist followers of Luigi Galleani. From that point forward, their lives and fates would be inexorably intertwined.

The arrest, trial and executions of Nicola Sacco and Bartolomeo Vanzetti occurred at a time of great social and political upheaval in the U.S. WWI and the Russian Revolution contributed to anti-immigrant sentiment. Prejudice was particularly strong against Italian Americans as newcomers who were believed to espouse radical ideas of anarchism, communism or socialism. Sacco’s and Vanzetti’s status as Italian immigrants and their anarchist sympathies led to their arrests for armed robbery and murder in South Braintree, MA on circumstantial evidence. Their trials took place in an atmosphere of anti-Italian American anger and scorn. On July 14, 1921, the jury convicted both men. Despite worldwide protests and appeals for clemency, the two men were executed in the electric chair at midnight between August 22 and 23, 1927.

The deaths of Sacco and Vanzetti continued to fuel protests, demonstrations and

commemorations long after their executions. The painter Ben Shahn was among the many artists to express his outrage at the fate of the two Italian immigrants. He likened their trial and deaths to the Passion of Christ. In 1931-32, several years after Sacco’s and Vanzetti's death, Shahn produced a series of 23 gouaches illustrating what he called "the passion" of Sacco and Vanzetti.

In Frances K. Pohl’s “Ben Shahn” Shahn is quoted saying: "Ever since I could remember I'd wished I'd been lucky enough to be alive at a great time-when something big was going on, like the Crucifixion. And suddenly I realized I was. Here I was living through another crucifixion. Here was something to paint!" Shahn continued to return to the theme of Sacco and Vanzetti as martyrs, punished for sins they did not commit, long after the actual events of the 1920s.

On August 23, 1977, the 50th anniversary of the executions, Governor Michael S. Dukakis proclaimed, “Nicola Sacco and Bartolomeo Vanzetti Memorial Day.” The Governor issued a proclamation, in both English and Italian, stating that “The atmosphere of their trial and appeals was permeated by prejudice against foreigners and hostility toward unorthodox political views.” It went on to declare “…that any stigma and disgrace should be forever removed from the names of Nicola Sacco and Bartolomeo Vanzetti, [and] from the names of their families and descendants…”