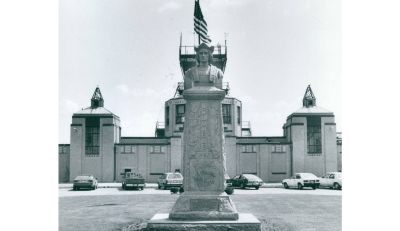 Statue of Christopher Columbus in front of the Akron Fulton Airport, 1988

At the meeting of the Akron City Council on June 29, 2020, the council voted 12-1 to rename the second Monday in October in the City of Akron, OH, “Italian American Heritage and Culture Day” in place of the name “Columbus Day.” This is the conclusion of three years of controversy brought on by a council member who attempted in 2017 to eliminate Columbus Day from the city calendar. This council member was the only dissent on the vote of this resolution.

A year and a half ago, former Italian American Professional & Businessmen’s Club (IAPBC) President Tom Cardone and IAPBC member John Vallillo were approached by council leaders Jeff Fusco and Margo Sommerville about another possible attempt to eliminate Columbus Day. Cardone and Vallillo agreed to participate on a committee to explore various solutions to this new threat and met with local Black clergy to discuss the issue. They met with the leaders of the 14 Italian American organizations in the Council of Italian American Societies of Summit County and two other organizations involved in the Festa Italiana to gather wider input from the Italian American community of Akron.

A meeting with Councilman Fusco and the president of the Council of Italian American Societies was held at the Italian Center in Akron, OH in December 2019 and 10 Italian American organizations sent representatives. All options were discussed, including continued protests at city council meetings if the change was attempted. Knowing that pressure on council each time the issue arose would be successful as long as seven council members and likely the mayor supported the Italian American position, that the numbers would not always be favorable and that the issue would not go away until resolved one way or another, the group discussed other options.

At the end of that meeting, the proposal was brought forward to keep the day as a celebration of Italian American traditions and to rename the second Monday of October “Italian American Heritage and Culture Day.” It was important to all involved that the Italian American community’s tradition of celebrating the accomplishments of Christopher Columbus could continue without restriction and the annual cotillion, mass and luncheon, as well as the individual club activities, could continue.

Additional meetings were held with the Black clergy after that initial meeting of the Italian American community and they eventually agreed that the name change represented a workable compromise and stated that they would support the change. Regular updates on the meetings were given to the Sons of Italy, the Italian Council and the IAPBC and many discussions were had with a wide variety of involved community individuals.

The end result of the action to rename Columbus Day was not to make everyone happy. It was intended to put an end to any further attacks on Columbus Day in the City of Akron. Little did the group know that at this time in history, Columbus would be in the spotlight of public opinion and the attacks on Columbus statues and the holiday celebrations around the country would be in the news every day. The committee’s goal was to remove this issue from the agenda in Akron forever and to move on to other challenges in the community.

With the passing of the resolution, the following four objectives were accomplished:

1. Acknowledge the Italian-American community's emphasis on celebrating Columbus Day as part of our long term history;

2. Acknowledge the contributions of our immigrant ancestors and current Akron and Summit County Italian-Americans to local society in business, education, art, government and other occupations;

3. Acknowledge the strong presence of the Italian-American clubs and societies as well as the hundreds of thousands of dollars contributed to scholarships and charitable contributions; and

4. End the assault on Columbus Day by outside organizations and local politicians once and for all.

WHEREAS, this Council recognizes Columbus Day is designated as a state and federal holiday and this resolution is not intended to affect such designations or First Amendment rights of individuals.

NOW, THEREFORE, BE IT RESOLVED by the Council of the City of Akron:

Section 2. That Council encourages other governmental bodies, businesses, organizations, and public institutions to similarly recognize the second Monday in October as Italian-American Heritage and Culture Day, rather than Columbus Day without infringing on the rights of the Italian-American community to continue its traditions and celebrations.

Tweet
More in this category: « Christopher Columbus: The Symbol of Italian American Culture In Awe of Stars and the Moon »