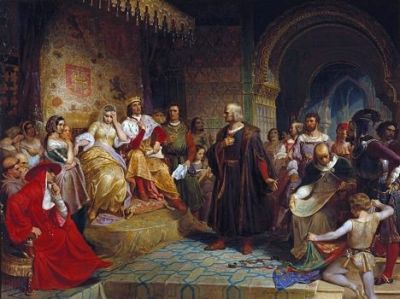 Columbus before the Queen by Emanuel Gottlieb Leutze.

Part Two of the Article Published in Our February Issue

In the letters Christopher Columbus wrote about his exploration of the islands he landed on and traveled through in 1492, he describes the land, people and climate he encountered. He doesn’t mention his journey across the Atlantic – that seafaring information was in a journal that has its own scrutiny. As with the letters, the journal was also hand-copied and translated and the original – so far – has not been found.

As mentioned in the February article, the letters are recorded as sent to Queen Isabella and King Ferdinand; Luis De Sant Angel (Santangel), who helped finance the voyage; and Gabriel Sanchez, treasurer of the Monarchs. Each version is worded differently, but similar in its intent.

In assertions against Columbus, much of the vilification is the mocking disparagement of his “discovery” of a “new land.” Subsequent comments constantly imply that all that occurred during the following years was carried out by just one person – Columbus.

During that time in history, Spain and Portugal were the leading maritime powers in Europe and in competition to be the most powerful. A trade route to the east, more land, more Christians, and more gold would bring more wealth to those in command. The Monarchs in Spain had to increase their empire and although they had previously denied supporting him, in 1492, they turned to Columbus.

In each of the three versions of the letters below, the opening paragraph shows that the land Columbus explored was explicitly for the Monarchs of Spain (for expansion of their empire). While the land was inhabited and regions had been previously explored, it was a recorded discovery for Spain, and – through the distribution of the Columbus letters – acknowledged throughout Europe as a discovery.

From the Sanchez letter (Source: https://www.gilderlehrman.org/sites/default/files/inline-pdfs/t-01427.pdf): “As I know that it will afford you pleasure that I have brought my undertaking to a successful result, I have determined to write you this letter to inform you of everything that has been done and discovered in this voyage of mine. On the thirty-third day after leaving Cadiz I came into the Indian Sea, where I discovered many islands inhabited by numerous people. I took possession of all of them for our most fortunate King by making public proclamation and unfurling his standard, no one making any resistance.”

From the Sant Angel letter (Source: http://www.ushistory.org/documents/columbus.htm): “As I know you will be rejoiced at the glorious success that our Lord has given me in my voyage, I write this to tell you how in thirty-three days I sailed to the Indies with the fleet that the illustrious King and Queen, our Sovereigns, gave me, where I discovered a great many islands, inhabited by numberless people; and of all I have taken possession for their Highnesses by proclamation and display of the Royal Standard without opposition.”

From the Monarchs letter (Source: http://www.ems.kcl.ac.uk/content/etext/e024.html): “Most Christian and most high and most mighty princes: That everlasting God who has given Your Highnesses so many victories has now given you the greatest ever given to any monarch. I have come with the fleet that Your Highnesses gave me from the Indies, to which I crossed in thirty-three days after departing from your kingdoms for fourteen of those thirty-three, I was becalmed and made little progress. I found people without number and very many islands, of which I took possession in Your Highnesses' name by royal proclamation and by unfurling the royal standard, and without contradiction.”

Definition of royal standard: “an emblem of royal authority that is usually a flag or square banner smaller than the national flag.” Source: merriam-webster.com

History is not isolated. It’s important to know how it relates to past events and to understand the circumstances surrounding those events.

Tweet
More in this category: « Easter in Abruzzo Bound for America: The Padrone System of Contract Labor (Part 1) »