Bound for America: The Padrone System of Contract Labor (Part 1) 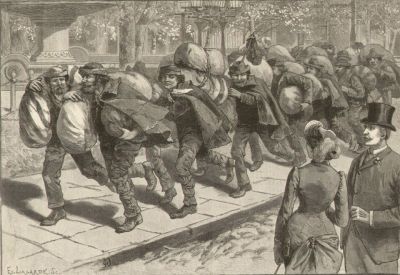 Contract labor, a variety of human trafficking, has a long history on U.S. soil. In the past, many Italian immigrants, mostly males, were caught up in the system. Does your family’s story contain a memory of an ancestor who “was put to work in America,” made landfall in a large group to serve under a “padrone” or labor boss, or paid a “bossatura,” an under-the-table job tax? If so, this piece may offer some insights about the subservient status of a large group of Italians who arrived during the great wave of European immigration.

The roots of the padrone system lay in the situation of peasants in Italy, where a host of problems followed the 1861 unification of the country. One of these concerned the lack of land and jobs for the growing population. To make matters worse, the new Kingdom of Italy was in the control of politicians from the north who enacted high taxes and rents on the southern portion of the country.

Under the new regime, peasants lost rights to use communal fields and pastures, while the country’s meagre land reform failed to allot enough acreage to sustain a family. The “macerato,” a levy on the milling of bread flour, was particularly oppressive and hated because it was essentially a new tax on bread. These conditions led to a peasant uprising in the south that devolved into widespread banditry. Then came harsh repression from the government. To survive, many Italians immigrated, first to South America and then to the United States and Canada.

How could poor Italians afford passage to America? How could they manage to find jobs, food and lodging in a foreign-speaking land? Steamship lines, ticket agents and even Italian banks stepped in to answer these needs . . . and to fill their pockets. Various schemes existed. One involved taking out a loan before departure to pay emigration expenses. Once in America, a padrone would assign the immigrant a job, control his movements and exact repayment with interest. Sometimes large groups of Italians would leave Italy in the company of a labor boss.

The Anchor Line was infamous for flooding towns in Italy with sales representatives, all working on commission, who extolled the job “paradise” that was the U.S. As early as 1872, the agency of Rochas & Son targeted the area near Agnone, Italy with a campaign of fraudulent advertising that dramatically increased the number of penniless Italians ending up on the streets of eastern seaports in the U.S. The same decade saw the importation on the West Coast of cheap, exploited labor from China. Not surprisingly, the Italians of the era soon received the scornful name “The Chinese of Europe.”

Many immigrants were thankful for the services of a padrone who helped them get to America and secure work. They never could have left Italy without a labor contract. Of particular interest to the U.S. public, however, was the use of Italians as cheap labor to undermine wages and working conditions. As early as 1873, in Ohio’s Mahoning Valley, coal operators employed Italians and African Americans to break a widespread coal miners’ strike. The use of immigrants as replacement workers quickly became a feature of the U.S. labor scene, so much so that it stained the image of Italians. By the 1880s, with even more arriving, the press reported on curious cases of newcomers, even children, at work under the supervision of their “cousins” or “fathers.” In reality these were not relatives but padrones.

Sometimes the assignment to a labor contractor began in a village in Italy. Or it began in the U.S., soon after landfall. In New York, throngs of Italians would arrive from Europe at Castle Garden - later on at Ellis Island - penniless but with instructions to report to the office of an “employment bureau.” In 1882,  reports of Giuseppe Brotali’s corrupt job agency exploded onto the pages of the city’s newspapers. In exchange for advancing a would-be immigrant $18 for the transatlantic passage, he exacted a payment of $5 a month for a year or more.

The 1880s witnessed daily ship landings at New York with hundreds of Italians disembarking as debtors to Brotali and other padrones. In fact, immigrant hires could be found all over the city where they often were assigned to beg by singing and playing instruments. As a consequence, the organ grinder and his monkey became a decades-long image of the Italian immigrant. The influx of so many Italians without funds alarmed the public, who feared that destitute immigrants working under the sway of padrones were taking over the city.

As the 1880s progressed, private banks run by Italians in the U.S. also stepped into the role of financing the arrival of immigrants. As even more Italians were recruited in work gangs for labor in mines, seaports and agriculture, alarm soon spread to other parts of the U.S. How could the native-born working class survive the onslaught of cheap labor from Europe? How could Italians get free from the control of the padrones? What would Congress do to stop the contagion? This story will be continued in May’s issue.

Tweet
More in this category: « The Columbus Letters (Part 2) From the Italian American Press - “A Camp Without Walls” »