America: Land of Liberty? Prejudice against Italians in the early 20th Century 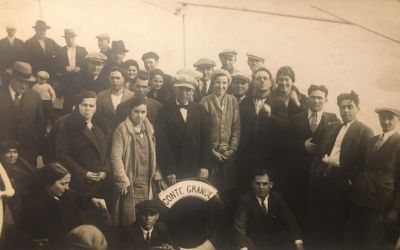 Nicola Lucarino, my grandfather, second from the right, like so many southern Italian peasants at that time, made the voyage to America to make money to send to his family in Civitanova del Sannio, Molise, Italy. Nicola came to America several times, the final in 1931 on the SS Conte Grande at the age of 35 to become a permanent citizen and therefore help to bring the rest of his family to the U.S. His look of confidence was prescient as our Lucarino family continues to thrive in the U.S.

Italian immigrants and their culture faced many forms of discrimination in the U.S. at the start of the 20th century. This hostility manifested itself against all Italians, but especially the southern Italian: those from Naples, Calabria and Sicily. This prejudice was initiated by the large increase in the number of Italian immigrants that arrived at that time—more than 2 million from 1901-1910 alone. Other causes included historical events, rising nationalism and pre-existing ethnic enmities. The Americans were fearful of the southern Italians and took offence with their appearance and their culture: most had dark skin, were willing to work in low-paid jobs and were considered mafiosi, criminal-like and undesirable. Cafone was an Italian word that originally meant “peasant” but was co-opted by Americans and applied to Italian immigrants to mean a rude, ignorant and crude person.

While there was hardship and discrimination for the Italians coming to the U.S., the great emigration was spurred by even greater misery in their homeland. Unemployment, illiteracy, little or no medical care, lack of opportunities to be educated, and miserable living conditions pushed them to see migraton as an opportunity to have economic and social freedom and the hope for a better life. After all, the U.S. was the “land of opportunity,” where the streets were “lined with gold” and where “money grows on trees!” So promised the brochures and postcards that were circulating throughout Italy to entice hopeless, jobless Italians to a “better” life. Because of the Second Industrial Revolution, there was a need for large numbers of unskilled workers. As a result, by 1920, over 4 million Italians had come to the U.S., and represented more than 10 percent of the nation’s foreign-born population.

Uncertain of what fate might await them, and having to endure the difficult ocean crossing as “steerage,” they endured below-standard conditions: often crowded into dark, unsanitary and foul-smelling holds with little to eat. An average steerage fare was $30 or the equivalent of nearly $900 today and immigrants often went into further debt borrowing the fare. Once the immigrants disembarked on Ellis Island, they were numbered, sorted and sent through a series of inspections. Failing an eye test, fitness tests or being too frail could result in being sent back to Italy, perhaps never seeing a loved one again. This resulted in about two percent being turned away. Fearing of such a separation, some Italians called Ellis Island L’Isola dell Lagrime – the Island of Tears.

In America, Italian immigrants were willing to work and live in terrible conditions and ironically, despite this, they were still greeted with prejudice and discrimination. From the beginning, immigrants to the U.S. had been exploited. The Padrone system was a contract labor scheme utilized by many immigrant groups to find employment, most notably Italians, but also Greeks, Chinese, Japanese, and Mexicans. Seeking out some form of bossism was typical of the newly-arrived, non-English-speaking immigrant groups in industrial America in the years after 1880. Needing to find jobs quickly, it was a method by which these ethnic groups overcame the problems of language and of differences in labor practices. Unfortunately, some Padroni were less than ethical. These “flesh peddlers,” recruited the southern Italian peasants, made them live in crowded houses and took more than half their salaries. Some shops refused to sell goods or rent houses to Italians hoping they would go away. They were derisively called “wop,” “dago,” and “guinea.” The Unions refused to listen to the Italians about their labor issues because the Americans were afraid that the Italians who, out of desperation would work for next to nothing, might steal their jobs.

There have been many infamous cases of discrimination against Italians. One of the worst instances of discrimination against Italians happened in New Orleans in 1891. It was one of the largest mass lynching’s in U.S. history. After the police chief there was assassinated while investigating supposed activity of the mafia, 19 Sicilians were arrested and put on trial for his murder. One local newspaper, fanning the flames of intolerance, wrote, “The little jail was crowded with Sicilians, whose low, receding foreheads, dark skin, repulsive countenances and slovenly attire proclaimed their brutal nature.” When the first 10 were found innocent by a jury but before they could be released, part of a huge mob of thousands that had gathered outside the jail, believing that the jury had been bribed, broke in and murdered 11 of them.

A major blow to Italian and other would-be immigrants to America was the National Origins Act of 1924. The “Act” imposed severe limits on the number of immigrants from southern and eastern Europe who could enter the U.S. Frightened by the Russian Revolution of 1917, Americans suspected anyone with a foreign surname of possible Communist sympathies. Johnson, the congressman who wrote these contingencies said, “Today, instead of a nation descended from generations of freemen bred to a knowledge of principles and practice of self government, of liberty under the law, we have a heterogeneous population, no small proportion of which is sprung from races that throughout the centuries have known no liberty at all…In other words our capacity to maintain our cherished institutions stands diluted by a stream of alien blood, with all of its misconceptions respecting the relationships of the governing power to the governed.” These words chillingly prologue Hitler’s extreme version of racial purity which led to millions of deaths during WWII.

Italians have now blended into the fabric of and contribute to every facet of American society. Still, stereotypes remain and are exploited, most visibly in film and television. Programs like “The Real Housewives of New Jersey,” “Mob Wives” and “The Sopranos” present Italians as stupid, hot heads, thugs, and mobsters, while real Italian culture is being preserved in the numerous Little Italys and Italian social clubs as well as churches and parochial schools throughout the nation and in the homes of millions who are both American and Italian. Who we Italians are as a people and how, ultimately, we will be remembered here in America is really up to us.

View the embedded image gallery online at:
https://www.lagazzettaitaliana.com/history-culture/8996-america-land-of-liberty-prejudice-against-italians-in-the-early-20th-century#sigProIdfaa363c628
Tweet
More in this category: « A Madonna and Child from Siena From the Italian American Press - "Vina, A Brooklyn Memoir" »