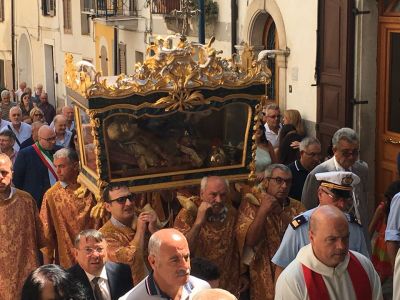 Civitanova del Sannio is a sleepy little town of about 900 people, compared to about 2,000 when my mom and dad lived there in the 30’s and 40’s. It is located in a central valley in southern Italy. In the years following WWII, the population declined as residents emigrated to America, Canada, other parts of Italy, and various European countries. Still, the pull of “home” remains strong, and many return along with tourists from nearby towns, for La Festa di San Felice Martire, the Feast of Saint Felix the Martyr.

The feast is organized by the non-profit cultural association, Civitanovesi nel Mondo, an organization founded in 2009 to promote cultural events preserving the traditions of the Molise region and to encourage social solidarity. As the Holy Protector of Civitanova del Sannio, San Felice is feted with a four-day celebration at the end of August that highlights not only religious faith but all aspects of local culture including art, typical products and gastronomic delights and flavors of the civitanovese cuisine.

We arrived on the second day of the feast, Aug. 29. Colorful lights adorned the main street and vendors hawked their varied wares. The Calci in Culo taunted us. That evening, we knew, was La Notte Bianca or the White Night celebration, and my sister, Joanna, made sure that we packed white clothing to wear so as to fit right in. We quickly found out that Notte Bianca didn’t have anything to do with attire! It is a special night for those who want to stay awake and party the night away.

After settling in one of only three B&B’s in Civitanova, we walked around the corner to say hello to our relatives. Everything is close in this sweet town and everyone knows everyone else, so it was “ciao” or “buona giornata” to and from everyone we passed. We were greeted at Zia Gigina’s with a table already set with delicious food. To show respect for the cook, we ate too much and consequently, to my dismay, could not partake in the civitanovesi street food that night. After dinner, we started our passegiata to check out the festival and work off some of that dinner.

The entertainment included a mime dressed all in white, creating laughter in both children and adults, a beautiful white angel on stilts and music. A duo calling their music modernizato played fascinating variations of jazz and blues and pop and rock, all with a country and western Italian feel. They claimed that they were the first group to bring this type of music to Italy. It was unique seeing an American flag and hearing many of our popular American tunes sung in English in this setting.

By evening’s end we were finally hungry, or at least craving something sweet. We found cancelle, thick and hearty, differing from the way I make them, thin and crispy and equally good, if I say so myself.

The music played, delicacies were consumed and the bravest of the young rode the Calci in Culo (kick in the ass) ride. Aptly named, the carousel with seats on the end of long chains encourages the rider to launch the person in front of them higher and higher by kicking them from behind. Loud techno music adds to the excitment. If a rider is able to fly high enough and knock down a flag that seems impossibly out of reach, they are rewarded with a free ride.

Aug. 30 was la festa religiosa which began with a procession led by Don Luigi Primiani, Parroco di Civitanova del Sannio, (the parish priest of Civitanova), followed by the sarcophogus of San Silvestro carried through the streets from its normal resting place under the altar of La Chiesa di San Silvestro Papa, the main church of three in Civitanova.

That evening in the large gazebo, the marching band played excerpts from beloved operas and even some American songs. People listened from chairs lining the entire main street.

The night ended with spectacular fireworks that seemed to go on forever. We watched them shivering as the temperature began cooling down like the feast that was nearing its end.

The last day of the festival was quieter. Joanna and I spent the day visiting (and eating) with our relatives: both local and those who came from Rome and the States. The evening brought more music and dancing before we headed to bed excited to begin our next adventure.

Tweet
More in this category: « From the Italian American Press - "Vina, A Brooklyn Memoir" The Columbus Letters »