The Terracottas of Renaissance Florence 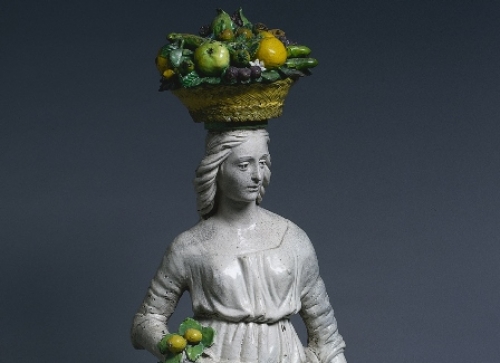 The Terracottas of Renaissance Florence

Florence is rightly regarded as the epicenter of the Renaissance. Each summer, the city teems with visitors from around the world. Some of which are academics, students, and writers, but many are casual visitors wishing to experience the city's magnificent architecture and monuments. No visit to the city would be complete without experiencing Florence's great Renaissance masters such as Donatello or Cellini, or without a visit to the famed Uffizi or Bargello museums. The modern perception of Florence's special role in Renaissance art comes from her architecture and painting, and through sculptures in marble and bronze. A lesser-known material for which Florentine sculpture became famous is terracotta or "baked earth," humble clay that was baked in a kiln.

As a material, terracotta was popular in antiquity, but little used during the Middle Ages. Italian sculptors preferred marble and bronze, ancient materials revered for their appearance, monumentality, and permanency. During the early 1400s, Italy's prosperous cities saw a large increase in public and private commissions for sculpture intended for private homes, chapels, tabernacles (receptacles for the Eucharist), street facades of houses, and public buildings. To meet this rising demand, artists began to execute sculptures increasingly in materials that were easily worked, quick to produce, and less costly than marble or bronze. The most common of these materials was terracotta; wet clay, modeled by hand, and fired in a kiln until hard. From the 1420s onward, terracotta found increasing favor with Italian sculptors, particularly those in the city of Florence, where numerous innovations were made in the modeling and coloring of this material.

Terracotta sculpture begins its life as wet clay. Using their hands as well as tools, artists shape a three-dimensional form that, when baked in a kiln, becomes hard and brittle. To produce a finished sculpture, the fired terracotta can be further refined by carving or engraving. Ranging in color from dull ocher to red, terracottas were often painted to imitate marble or bronze and could even be gilded.

Florence's most prestigious family of terracotta sculptors, the della Robbia family, is best known for a technical innovation: the use of vitreous glazes (surface coatings fused by firing in a kiln) to color sculptures modeled in terracotta. A highly porous material, unglazed terracotta is generally unsuitable for outdoor use. The colorful glazes of Luca della Robbia (1400-1482) made his terracotta sculptures impervious to moisture and thus durable in outdoor architectural settings. From the 1440s to the 1460s, Luca executed a large number of glazed terracottas, particularly "Madonna" reliefs and colorful medallion coats of arms, which to this day still abound on Florentine exteriors and in museums throughout the world. Luca's terracottas, beautifully glazed, were also in demand for interior decoration. In the Medici study within the Palazzo Medici, for example, the vaulted ceiling was decorated with a set of twelve medallions from Luca's studio dating from 1450-1456. The medallions illustrated the labors of the month and were beautifully decorated in blue and white glazes. Luca's nephew, Andrea (1434-1525), inherited the workshop, and with it, his uncle's secret technique of vitreous glazing. Andrea introduced the virtual mass production of terracotta sculpture in Florence with his five sons, one of whom, Giovanni della Robbia (1469-1529), eventually headed the workshop. Giovanni was the most talented, being noted for the sacristy (1497) of S. Maria Novella, the "Nativity" (1521) in the Bargello Museum, and the medallions at the Ceppo Hospital at Pistoia

The Cleveland Museum of Art possesses several charming examples of Florentine terracotta sculpture dating to the early 1500s. A particularly interesting work by Giovanni della Robbia depicts "Dovizia," an idealized young woman bringing the bountiful gifts of nature to market. The sculpture, about 40 inches in height, was undoubtedly commissioned for a private home in Florence. The identity of the patron is unknown. "Dovizia" is a personification of abundance, and therefore suggested to its owner the prosperity and wealth that was hoped for by the family. The sculpture was inspired by a much larger, greater than life-sized sculpture by Donatello that once stood on a granite column in the Mercato Vecchio (today known as the Piazza Vittorio Emmanuele), one of the major squares in Florence. Donatello's sculpture would have been familiar to all Florentines and is known to have occupied that location until the eighteenth century. It is likely that Giovanni della Robbia adapted Donatello's original sculpture for domestic use in a private home. Cleveland's "Dovizia" is an important visual link to Florentine domestic culture of the Renaissance.

As the Renaissance progressed in Italy, terracotta was established not only as a sculptural material, but also as an architectural material used with consummate skill by Florentine and other Tuscan artists. In its decorative application, it reached distinction through the work of the della Robbia's. In addition to magnificent doorway tympana and decorative medallions, especially the series of "Madonna" compositions, they used terracotta for tombs, fountains, and altars. The material was also favored for bozzetti, or sculptors' sketches, as well as large monumental works.

From Italy, terracotta work spread to other countries, largely through the activities of migrant Italian artists. The ChÃ¢teau Madrid, now destroyed, designed by Girolamo della Robbia and built for Francis I, was richly decorated with terracotta details. The art was introduced into Tudor England around 1510, probably by the Florentine sculptor Torrigiano. In southeastern England, where good stone is lacking, important country mansions had ornamental detail of molded terracotta. On Hampton Court Palace, outside London, Cardinal Wolsey employed Italian workmen who produced portrait medallions and other decorations in terracotta, a material brought to perfection by the sons of Florence.