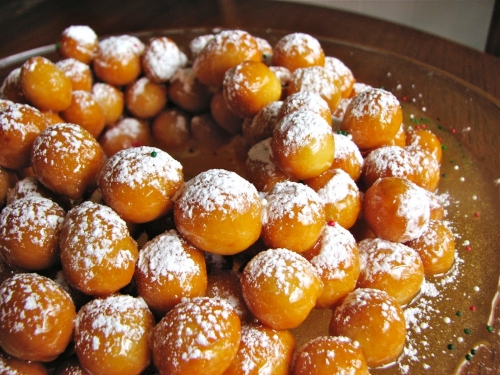 For Italians, December 25th is without any doubt the most important day on the calendar. Christmas, a day that has mainly a religious meaning, began in Italy around 300 A.D., when Emperor Constantine, after adopting the new faith of Christianity, celebrated the birth of Christ for the first time in history. The feast day of the Romans' old pagan god, Mithras, fell on December 25th and that was the day chosen to honor Christ.

The tradition of the Christmas tree began many centuries later, and was introduced in Italy by populations from other countries. Today in Italy, though you can see many Christmas trees, the traditional symbol among Italian Christmas decorations remains the Nativity scene. Built in various sizes with different materials, mangers or presepe, are very common in Italian houses, particularly in the South. The Neapolitan presepe are very famous and most of them are works of art, built of papier-mÃ¢ché, wood or cork by experienced artisans, who have passed on their skills from generation to generation, like those found on Via San Gregorio Armeno. According to the tradition, at midnight of Christmas Eve the youngest of the family places Baby Jesus in the manger to symbolize his birth. In some small towns there is a live Nativity scene, like the one in Caltagirone (Sicily) with adults and kids impersonating the various characters.

The holiday period, which goes from Christmas Eve to the Epiphany, is dedicated to the family. An old saying goes "Christmas with your family and Easter with anyone you wish." The most characteristic Italian Christmas sound is the one of bagpipes, played by pipers called zampognari. They are shepherds who live in the mountains and go down to the plains at Christmas time to play on the city streets. The melodies they play are adaptations of old traditional, country tunes. Modern "zampognari" still dress like their ancestors did, with sheepskin vests, leather breeches, a woolen coat on their shoulders, and knee-high leather strapped shoes bind their white stockings.

Yet we cannot talk about Italian Christmas traditions without talking about food. On Christmas Eve Italians used to eat the classic "cenone" (literally "big supper"), made up of several courses. Especially in the South, traditional food for this evening are broccoli with garlic, oil and lemon, spaghetti with clams, fried salted cod, big fried eels, boiled cauliflower with olives, anchovies and capers. The big supper ends with fresh and dried fruit: walnuts, peanuts, chestnuts, almonds, roasted pumpkin seeds, figs and torrone. Among the Christmas desserts there are panforte in the North and struffoli in the South. Panforte is a typical dessert from Siena, round and flattened, made from flower, almonds, sugar, candied fruit and cooked in the oven. Struffoli, of Greek origin, comes from a mixture of flower, eggs, sugar and butter. The dough is then cut up into little balls and fried in boiling oil. The little, fried blond balls are dipped in honey and sometimes mixed with candied fruit and. Naturally, a slice of panettone (brioche cake with raisins and candied fruit) or pandoro (without raisins) is never rejected. Finally the whole family enjoys playing tombola (bingo) until late at night.

In Italy the year ends with the celebration of New Years Eve (the feast day of Saint Sylvester) when colorful fireworks light the sky as the clock strikes midnight. In some old city neighborhoods people still observe the tradition of throwing broken household items out the window. So you might see broken chairs, bags of old clothes or anything they no longer use, flying from the windows above and onto the street below.

Holidays for the Italians go on after New Years Day. Although most presents are exchanged on Christmas Day, the Epiphany on January 6th means some more gifts for children. According to the Catholic religion, on this day the three Kings arrived in Bethlehem to offer their gifts (gold, incense and myrrh) to Christ. As tradition goes, an old woman called Befana, riding her broom, brings stockings full of candies and gifts to all kids who have been well behaved during the previous year.

The Christmas holidays end with the Epiphany. Children go back to school and adults go back to work. As an old saying goes: "Here is the Epiphany Day that carries the holidays away." Merry Christmas and Happy New Year to everybody!

More in this category: « Rome's birthday is April 21: A celebration in Italian phrases The Presepe Tradition of Naples, Italy »