The Presepe Tradition of Naples, Italy 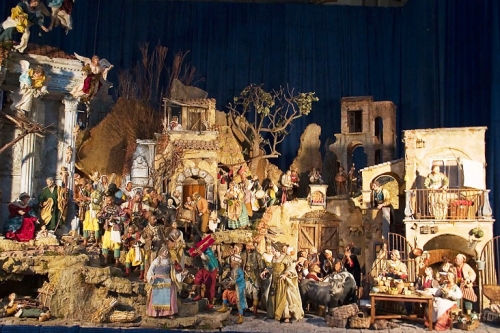 A typical Nativity scene in Italy.

Christmas in Naples, Italy is truly special particularly since Naples is most famous for its Nativity scenes or presepi. Presepe means crib or crèche and the one place in Naples that is a must-see especially at Christmastime is the famous pedestrian street, via San Gregorio Armeno. Located in the centro storico, or historic district of Napoli, this street has hundreds of shops featuring hand-made presepi.

Sometimes called the "street of Nativity workshops," or "Christmas Alley," via San Gregorio Armeno in Naples is particularly popular at Christmastime. Over half a million tourists visit these small shops which line the street on both sides. Although they are open year round, the best time to visit is during the months of September or October, before the busy Christmas season, just at the time when the artisans are preparing their shops for Christmas. You can even observe these skilled craftsmen actually work on the figures as they carve and paint them.

Presepi - A Tradition in Italy

Complete Nativity sets range from 40 euros to 4,000 euros and even more. The various shops also sell a plethora of figurines and accessories to use in creating your own presepe. In Italy, the Nativity scene doesn't just consist of Baby Jesus, Mary, Joseph and the Three Wise Men. A whole village is created around the manger itself.

In Italy, every family has a presepe, and starting December 8, Italian families set up their presepi inside their homes, taking great pride in creating very elaborate scenes with lighting, backdrops, running water and multiple figures. However, Baby Jesus is never placed in the crib until Christmas Eve, and the presepe usually stays up for a month until after the feast of the Epiphany.

Italians are very serious about the presepe. In fact, when my Italian friend Angela visited me during Christmastime she actually made one for me. She was surprised that I only had the terracotta figures. I was so impressed with how elaborate it was. The finished presepe was complete with twinkling Christmas lights, burlap, fake grass, and carpeting, to resemble the manger scene. It was beautiful! Luckily, I took a photo of it so that each year I can re-construct it by myself. She used a cardboard box and some inexpensive items to create this work of art.

History of the Presepe

It was actually St. Francis of Assisi who is credited with popularizing the presepe, using live animals and real people for his Nativity scenes. In the 13th century in a cave in the small town of Greccio, St. Francis built a manger scene and celebrated Mass. Since then the tradition spread throughout all of Italy, but the Neapolitans believe that they do it best. Throughout the city of Naples, hundreds are presepi are displayed at Christmastime. Often the presepe even consist of real people and animals and are called presepi viventi.

TIf you still want to see more presepi, you can visit the largest Nativity scene in the world by making a stop at the Museo Nazionale di San Martino in Naples. A former monastery, this large building is home to the Presepe Cuciniello It includes over 160 characters, 80 animals, 28 angels and over 400 miniature objects.