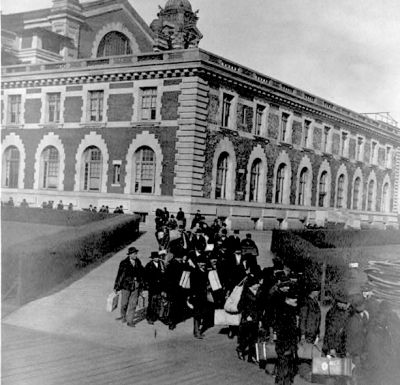 Immigrants leave Ellis Island to embark on their American journey. Read this month's column and future columns to discover interesting facts and stories about what they faced in Italy and in America in order to become Americans.

We are going to be taking a slightly different approach to the study of our Italian genealogy by exploring what I believe to be the next level in the discovery of our roots. Many of us become interested in genealogy because we want to learn about our ancestors and understand where we came from. As we get good at collecting records and vital facts about our ancestors, it seems that we find ourselves wanting to know more about our families, such as how they lived and how the world around them impacted their lives. This change in focus is when the genealogist becomes a family historian. This happened to me and many of my fellow genealogists. I found that I wanted to learn about the cultural, geographical, social, and political history and events that my ancestors lived with and through. By understanding these things, I gained even a  greater appreciation for my family’s successes and struggles in life and perhaps was able to answer some of the questions I wished I had asked when I had the chance.

Over the last few years, I have shared genealogy tips with you. Now, I think we are ready to explore and piece together the histories of our ancestors. Unfortunately, for most of us, our immigrant ancestors are no longer with us to tell us their stories. Therefore, we are left to research and learn from the experience of other immigrants whose journeys were well-documented to piece together our own ancestors’ stories. To start off this series, I will share with you a general concept of what it was like for your ancestor to make their way from the motherland to America in the early 20th century. Although every individual’s story is unique, there are some universal elements that can be applicable for most of our ancestors. Topics that we will be exploring are:

•  Living in Italy during the period of mass migration

•  Getting to the departure port

•  Migrating between America and Italy

•  Understanding the economic impact of migration

It is my hope that by learning about life in Italy and the journey that our ancestors made to become Americans, that it will help to further instill in you the pride that many of us Italian Americans feel for our ancestors. Our families left Italy to escape extreme poverty. America was the place where they believed they could succeed because of their hard work. It was a place where the life they were born into would not guarantee their destiny. It was the place where there was plenty of opportunity, even for those who believed their sojourn in L’America was only going to be a temporary one.

To provide some perspective for our foray into Italian American family history, its useful to look at some of the pertinent immigration statistics and facts.

•  Between 1876 and 1930, out of the 5 million immigrants who came to America, 80 percent were from the Mezzogiorno (Southern Italy), coming mostly from the regions of Abruzzi, Apulia, Calabria, Campania, Molise, and Sicily.

•  Within 5 years, it is estimated that 30-50 percent of the immigrants returned to Italy.

•  Over two-thirds of the immigrants from the Mezzogiorno were farmers (contadini); the remaining were skilled craftsmen who were typically carpenters, brick layers, masons, tailors, and barbers.

•  By the late 1890s, it is estimated that Italians living in America were sending between $4 -$30 million each year back to Italy.

•  Steamship travel between Naples and New York took between 10 and 12 days.

•  Most immigrants traveled in third class (steerage) with an average ticket price of $30.

•  Steamship companies spent on average 60 cents per day per steerage passenger for meals.

These are just some of the fascinating facts and details we will be exploring over the next few months. I hope they have peaked your interest and that you will enjoy tracing with me our ancestors’ journey from Italy to America!