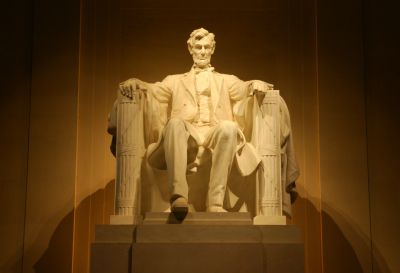 In 1888, Giuseppe Piccirilli, a well-known stone carver from Massa-Carrara in Tuscany, Italy, brought his wife, daughter, and 6 sons to New York. All of Giuseppe’s sons, Attilio, Feirrucio, Furio, Getulio (Giulio), Masaniello, and Orazio were trained as marble cutters and carvers. Upon their arrival to the States, Giuseppe and his older sons began working at Samuel Adler’s Monuments and Granite Works on E. 57th St. Soon after, they set up their own stone-carving workshop on W. 39th St. and began to garner recognition for their craft. In 1890 when Mrs. Piccirilli fell ill, the family was forced to relocate from Manhattan. They purchased property on 142nd St. in the Mott Haven section of the Bronx and built a brownstone and two large studios. Eventually, their workshop would occupy an entire city block.

There is not much history published on the Piccirilli family, but the stone-carving brothers became well-known in the United States. In fact, Albert Ten Eyck Gardner, former curator of American Sculpture at the Metropolitan Museum of Art, said, “The arrival of this family may well have marked an epoch in the history of American art.”

The year 1901 was the turning point for the Piccirilli’s. One of Atillio’s works defeated 40 other competitors for the sculpture portion of the Maine Monument at Columbus Circle in NYC. They renovated their studio decorating the façade with reliefs and medallions. And thus, began a long career of sculpting and carving major U.S. monuments.

Many of the Piccirilli’s carvings and sculptures were designed by other artists such as Daniel Chester French, perhaps most notably the Lincoln Memorial. The giant central figure of Abraham Lincoln in the Lincoln Memorial in Washington D.C., weighing 150 tons and measuring 19 feet in height, is one of the best-known examples of the Piccirilli brothers’ work. Other works in the Piccirilli portfolio include the pediment of the New York Stock Exchange, Four Continents (the entrance of the United States Custom House at Bowling Green in NYC), the pediment of the façade of the Brooklyn Museum and all its 30 statues, the Washington Arch in Greenwich Village, and the Metropolitan Museum’s  Milmore Memorial, Melvin Memorial and Memory. A couple of the Piccirilli brothers have sculptures bearing their own name such as Furio’s “The Seal” in the Metropolitan Museum and Atillo’s “Fragelina,” an abstract marble of a young girl growing into a graceful woman.

These Italian American sculptors achieved their American Dream and left a mark on American history that we can all enjoy for centuries to come.