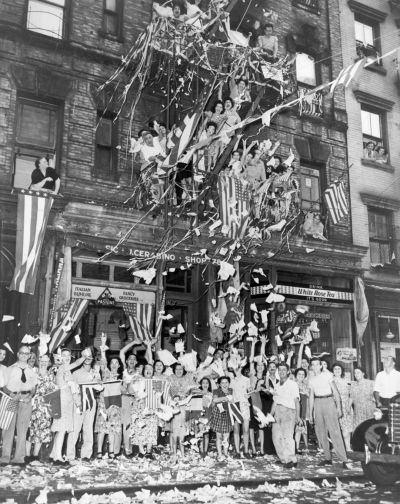 “The roaring twenties was a decade that began with a sense of optimism and a carefree spirit and ended with the fall of the stock market and the beginning of the Great Depression. While many had to figure out ways to make-do in a troubled America, Antonio Pasin was on the way to revolutionizing his vision.” (www.radioflyer.com)

Born on July 4, 1897 in a small town near Venice, Italy, Antonio Pasin was the son of a cabinetmaker. In 1913, at the age of 16, young Antonio moved to America to start a new life in Chicago. He found work with other immigrants doing construction, washing celery and carrying water. Finally, he saved enough money to rent a one-room workshop on Chicago’s west side.

Being the son and grandson of successful cabinetmakers, Antonio was able to put his design skills to good use. He began building phonograph cabinets and the Venetian Furniture Company was born.

Antonio loved to tinker and create new products. One of his creations was a red, wooden coaster wagon he aptly named the Liberty Coaster after the statue who welcomed him to America. He would peddle his pieces in the streets and eventually began selling more wagons than phonograph cabinets. He would build wagons in the moonlight and sell them during the days. By 1917, Antonio had a successful business selling his red wagons. By 1923, Antonio’s Liberty Coaster Company had several employees working to produce high-quality, affordable wagons.

Antonio’s goal was to make wagons “For every boy. For every girl.” He adopted metal-stamping mass production techniques inspired by the automotive industry. This earned him the nickname “Little Ford.” His first wagon produced by this method was called the Radio Flyer, said to be named after his amazement of the radio (invented by fellow Italian Guglielmo Marconi) and the wonders of flight. Even though the 1920s were a tough time for Americans, his wagons continued to be in demand.

In 1930, Antonio renamed the company Radio Steel & Manufacturing, and, despite hard times, it was the world’s leading producer of toy coaster wagons. During the 1933 Chicago World’s Fair, Antonio, with the help of fellow Italian Alfonso Iannelli, constructed a 45-foot Coaster Boy exhibit. The exhibit was one of the most popular exhibits and made the Radio Flyer wagon world famous.

When America was at war in the 1940s, Radio Steel & Manufacturing, like many other American companies, was asked to alter its production and Antonio and his team began making the “Blitz Can.” This piece of military equipment was a five-gallon steel container mounted on the backs of jeeps, trucks and tanks designed to transport fuel and water to troops stationed overseas. In 1945, the company received an Army-Navy “E” award for high achievement in production materials needed for the war.

By the 1950s, Radio Steel & Manufacturing was taking full advantage

of the baby boom. Its new designs included specialty wagons inspired by popular movies and TV shows like Mickey Mouse and Davy Crockett. It produced garden carts – a revolutionary design popular in the new suburban American homes. As time went on and the world changed, Radio Steel continued to forge ahead with new product lines and designs; from wagons designed to help children take their first steps to the ski sled.

Antonio’s son, Mario, took over the company in the early 1970s and the company continued to flourish. Although Radio Steel & Manufacturing Company was commonly referred to as Radio Flyer, it was not until 1987 that the name was officially changed to Radio Flyer, Inc., a tribute to the famous “little red wagon.”

Antonio Pasin died in 1990 and by 1997, Antonio’s grandsons became the third generation of Pasin’s to lead Radio Flyer. Antonio’s original designs have nurtured the imaginations of millions of children for decades. He was inducted into the Toy Industry Hall of Fame in 2003.

In 2017, Radio Flyer celebrated its 100th anniversary and is still headquartered in Chicago. Today customers can create their own customized wagons, trikes and scooters online, complete with personalized nameplates. From the humble beginnings in his small shop in Chicago to the plethora of red products created today, Antonio Pasin created his Italian American dream, a dream that lives on through generations.