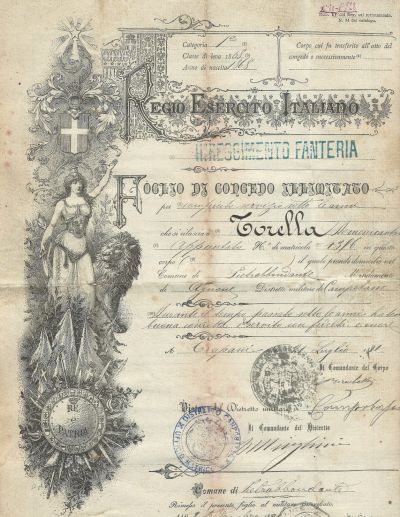 An example of the Foglio di Concedo Illimitato, an Italian military discharge certificate. This record shows that Domenicantonio Torella served in the Italian army from September 8, 1888 until July 21, 1891. Records like these contain a good deal of genealogical information and are an excellent alternative when vital records cannot be located.

This month we are exploring Italian military service records. Every Italian male born around 1850 or later was required to register for the draft (also known as conscription). These records hold a lot of valuable genealogical information. Our focus will be on records created after 1865 when Italy unified. However, there are military records that may exist, particularly in the Northern provinces, which were created as early as the mid-1700s. In Italy, military service is compulsory requiring two to three years of service.

Beginning as early as 1865, all males were required to report to their local draft board to register for the draft, even if they were disabled, although the availability of records may vary.

Annually, the draft board would create a Liste di Leva or Registro di Leva (Conscription Lists) for all the males who turned 18 that year containing biographical information such as name, date and place of birth, parents’ names, and if he could read or write. There may also be annotations on the record if an individual died before age 18 or if he had immigrated.

When a man turned 21 and was eligible for service, he would report to the draft board for a physical examination to determine his fitness for service. A Liste d’Estrazione recorded this information.

Another important record is the military service record, Registro dei Foglie Matricolari, which contains the details about an individual’s enlistment, promotions, assignments, and discharge. Interestingly, if you had an ancestor who emigrated from Italy before serving in the military or before WWI, the record for your ancestor will be annotated as “deserter.” Because the punishment for desertion could range from imprisonment to death, many feared returning to Italy. Eventually, the Italian government granted pardons.

You may have in your possession a copy of your ancestor’s discharge document which is known as Foglio di Concedo Illimitato (Unlimited Discharge). When a soldier completed military service, he received a copy. It would also contain biographical and personal information.

The Value of Military Records

When a registration was created, information about a man’s birthdate, parents’ names, place of residence, and place of birth was recorded. Military records may have the details you need to dig deeper into your research. For example, if you know that your ancestor was born somewhere in the province of Caserta but do not know which town, the military record can direct you to the proper location and make your search for other records more efficient. Because military records are usually indexed and are arranged by year of birth, they are often quicker to search through than the vital records for several villages in a province.

Military records also contain other personal details such as hair and eye color, complexion and health details. If no photograph exists of your ancestor, this will help you get a visual of what he may have looked like.

How to Find Military Records

Military records are organized by military district (distretti) and correspond to the province in which a draftee resided. You will need to know, in general, where your ancestor lived and may need to consult a map or gazetteer to determine where to start your search. Keep in mind that district boundaries may have changed over the years. For example, the records for my ancestors who were from Pietrabbondante, which is presently located in Molise in the Province of Isernia, are found in the military district of Campobasso.

Two copies of the records were made. One record was kept at the archives of the military district and the other was kept at the local court (Procura della Republica). The local court records, after 75 years, are sent to the state archives. Because the state archives may be comprised of multiple military districts, it might be the best place to start your search. Fortunately, some records have been digitized and are available to search at your local Family History Center, hosted by the Church of Latter Day Saints. You can find your closest Family History Center at www.familysearch.org/ask/help. If the records are not digitized, you will need to write for them. Find contact information at www.atenati.san.beneculturali.it at “The Land and the Sources” link on the Home Page. For an excellent sample letter for requesting military records: www.freeitaliantranslations.blogspot.com/2010/01/letter-to-state-archives-of-comune-your.html. Happy ancestor hunting!

Tweet
More in this category: « Do You Qualify for Italian Dual Citizenship? Little Italy: Philadelphia »