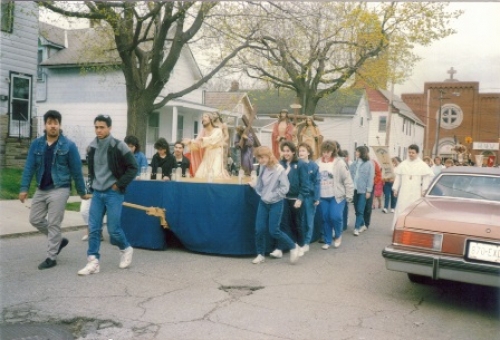 When one hears the word "procession" what comes to mind? For some it is as the Dictionary explains: the act of moving along or proceeding in orderly succession or in a formal and ceremonious manner, as a line of people, animals, vehicles. In the Catholic tradition, the word "procession" can have several meanings: The procession of the Holy Spirit from the Father and the Son; the procession of the Ark in the Old Testament (cf. especially 2 Samuel 6 and 1 Kings 8) or the triumphant entry of our Divine Savior into Jerusalem that first Palm Sunday. For most people and cultures, a "procession" is a going forward; denotes movement; mindful that our life here on this earth is a journey and we are pilgrims advancing toward heavenly homeland.

In Italy, in particularly in Sicily and Abruzzo, for centuries a procession has been held on Good Friday, commemorating the Death of the Lord and remembering "La Madonna Dolorosa." Similarly, and shortly after the Italian community at Trent and Fulton Road were established, a Good Friday Procession began. Evidence proves that the Good Friday Procession in the community of Saint Rocco Parish has existed shortly after the first church was built in 1917. At first, the procession was small with only the statues of the dead Christ (Cristo mort) and the Sorrowful Mother. The solemn and sorrowful pageantry from Good Friday processions in Italy was preserved as the statues were carried by the men, on their shoulders; the women dressed in black; everyone caring lighted candles, singing lenten hymns and praying the Holy Rosary.

As the years progressed and the parish grew, the Good Friday Procession became larger with the addition of more statues depicting the Passion of our Divine Lord. Many of these statutes, donated by parishioners such as the Calandra, Tortelli, Ripepi, Antonucci and Mazzone families, were acquired between the 1950's and 1960's. Following the Three O'Clock Services on Good Friday, the sanctuary of St. Rocco Church becomes a display of the statues of the Passion which depict the Agony of our Lord in the Garden; Ecce Homo; Scourging at the Pillar; Veronica; Carrying the Cross; Crucifixion; St. John; Pieta; Christ in the Tomb; the Sorrowful Mother. These same statues are carried in procession; several men dress as penitents with their heads and faces covered and carry three large wooden crosses - many years ago one of the "penitents" carried a large cross throughout the streets barefoot. There are also the various parish sodalities, clubs, organizations, school children and parishioners accompanied by the Italian Band with the Sorrowful Mother at the end of the procession, draped in a black cope. After walking through the neighborhood streets, praying the Holy Rosary and signing lenten songs, the multitudes return and enter the church to listen to the "Vieni Maria" sermon on the Sorrowful Mother. All the statues are returned to the church sanctuary but the Sorrowful Mother. She remains in the vestibule, draped in black, until the priest preaching beckons her with the famous "Vieni Maria!" As the priest repeats "Vieni Maria, Vieni!" the Sorrowful Mother is carried into the church on a bier as all the faithful stand and witness her slow approach to her Son, dead upon the cross. Upon arriving at the foot of the cross, the priest then places a large crucifix over the Sorrowful Mother's heart, symbolizing her shared agony and pain in her Son's redemptive work. The faithful are then given a blessing with the relic of the true cross and the opportunity to kiss the same relic.

The Good Friday Procession at Saint Rocco's will take place this coming April 18th at 6:30pm. The homilist this year for the "Vieni Maria" will be Fr. Lawrence Tosco, CSJ. Everyone is invited to take participate in the Good Friday Procession. It is one of the well preserved Italian traditions which reminds all who participate in it profound significance of Christ's Death for our salvation.

In recalling the Lord's Death, we are reminded that Good Friday is not end and there is Easter Sunday, as so we walk forward, in procession, because our life is a journey; our daily trials and sorrows are to be embraced with the same love and devotion of Mary. The Holy Mother of God was and remains the first of all the disciples of her Son, our Lord. It is Mary, who teaches us by her example how to remain faithful in the midst of difficulties, even in the face of death. It is Mary who is the model of true Christian living and liberty; waiting in joyful hope for her Son's resurrection on Easter Sunday. Madonna Dolorosa, prega per noi!!!

Tweet
More in this category: « The Italian Jewish Wedding Finding the Way Back to the Garlic Corners »