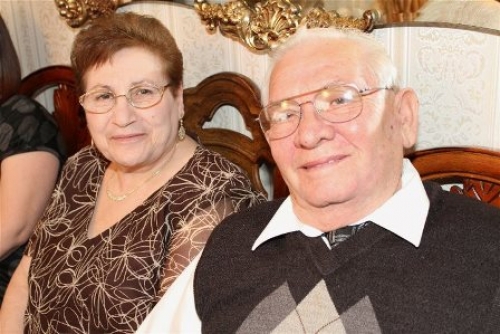 Francesco and Giuseppina (Josephine) Catena left Ramacca, Sicily (Prov. Catania) and came to America on April 6, 1966. Their story began as neighbors in Ramacca where her parents, John Sabatino and Francesca, owned an Italian deli. John and Frencesca were reluctant for their daughter, Giuseppina, and Francesco to become involved because Francesco was the sole provider for his mother and two brothers. He was 14-years-old when his father, Santo, a World War II Prisoner of War passed away, soon after returning home. Francesco's mother didn't want him to fall in love and marry because of their situation at home.

Giuseppina and Francesco forged a special kind of love. The couple was very much involved in the church, and Francesco frequently left notes under the cloth of the altar in front of the Virgin Mary for his love. Giuseppina did the same in return. The Virgin Mary and the Church were mindful of their secret love.

In Italy, Giuseppina worked in her parents' deli and when Francesco came into the shop, she would give him extra deli meats without her parents' knowledge so he would have enough to feed his family. As their love blossomed, her family knew if she married Francesco she would stay in Italy; they married and had four children.

Giuseppina's parents immigrated to America in 1956, and settled in Boston. Ten years later, Giuseppina and Francesco arrived in the U.S., landing at Logan Airport in Boston. Their total wealth was $300. After 15 years in Boston, they came to Cleveland and settled among paisans in Collinwood, later relocating to South Euclid. Francesco worked long hours as a mason and built homes, working to save the money he earned. He purchased a restaurant, and decided that his family, that loved to prepare platters of food, would cook for everyone.

The Francesco & Giuseppina Catena family celebrates the Feast of San Giuseppe (St. Joseph) each March and welcomes one and all into their home. During their life in Sicily, they prayed to the patron saint for a miracle when one of their children was very ill, and pledged to provide the St. Joseph Altar in the saint's honor if the child recovered. The St. Joseph Altar originated in Sicily and features three tiers, representing the Trinity, filled with food, candles and flowers. The child recovered and the Catena's have honored the patron saint for 53 years.

Blessings continue for the Catena family of four children, five grandchildren, and five great-grandchildren. Since 1989, they have owned and operated the warm and charming Mama Catena Ristorante, celebrating life, family, food, and friends in Euclid, Ohio. The restaurant is an extension of their dining room table, welcoming everyone.

Tweet
More in this category: « Easter Traditions A Christmas Story »