The Christmas Season in Italy 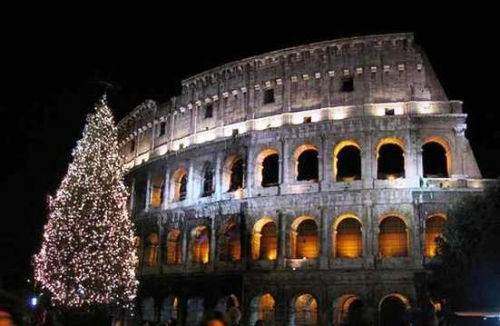 The Christmas Season in Italy

From the Feast of St. Nicholas on December 6 to Epiphany on January 6, Italians have found many ways to honor the birth of Christ beyond the calendar day of December 25. Activities based on the importance of saints, customs, and traditions vary among different villages, cities and regions. In joyful anticipation of Christ's coming and commemoration of his birth, specialty foods, music, processions and bonfires are at the heart of most of these celebrations.

The Feast of St. Nicholas on December 6 celebrates the momentous arrival of the saint's remains in Italy in the 11th Century. Though St. Nicholas was of Greek descent, born in Asia Minor and made Bishop in Myra during the 4th Century, his partial remains were secretly moved to Bari, Italy by Italian sailors in 1087. Christians feared that when the Turks invaded Asia Minor, they would be unable to make pilgrimages to Myra to honor the saint at his tomb, and so the sailors took off with the human relics so that he could be honored elsewhere.

Nicholas' history was one of endurance through the Christian persecutions. His dedication to Christianity, his love and generosity offered for those in need, and the multiple miracles attributed to St. Nicholas made him a widely venerated figure. He is a patron saint of many children, maidens wishing to be married, scholars, mariners, and prisoners-just to name a few.

On the eve of December 6, cities such as Molfetta and Trieste await the coming of San Nicola as other cultures would wait for Santa Claus. Children leave letters for him asking for gifts and promising good behavior for the following year! While the children are sleeping, San Nicola leaves chocolates, candies and other special things. Family patriarchs dress up as St. Nicholas and hand out gifts. Coal is given to children who have misbehaved.

The Feast of St. Lucy, or Santa Lucia, comes next in the holiday season on December 13. Lucy was a young girl from Siracusa, Sicily who tragically suffered at the hands of pagans for her devotion to Christ. Specifically, the man to whom her mother committed her for marriage was so embittered by her refusal of marriage, that he turned her in to authorities. Dragged by oxen, eyes torn out in an attempt to get her to refute her Christianity, no amount of torture could get Lucy to give in. History recounts that around the year 310, a fire was set to torture her but the fires just wouldn't stay lit. She was then stabbed in the throat with a dagger but appeared to only die once she was given the Christian sacrament. She is known as the patron saint of those with eye problems.

St. Lucy's remains can be venerated at the Church of San Geremia in Venice. Her head was sent to Louis XII of France and still remains there in the Cathedral of Bourges.

To mark the Feast Day, torchlight processions and bonfires commemorate the young girl whose name means "light." This also goes along with the winter solstice which occurs around the same time.

The meal most commonly associated with the feast day is Cuccia, a cooked wheat porridge that can be made savory or sweet. As the story goes, during a famine in Sicily, the people invoked St. Lucy and were rewarded with a ship appearing in the harbor filled with grain. A sweet version of Cuccia is a mixture of cooked wheat, fig honey, orange peel and walnuts. Some Sicilians refuse to eat wheat on December 13 to honor St. Lucy. Almond cookies, made to resemble eyes and served in pairs, are often served during the Feast of Santa Lucia so that people recall the torture she had to endure.

In certain regions of Northern Italy, St. Lucy is the gift-bearer during the Christmas season, and as with other occasions, coal was left for naughty children! According to tradition, Lucy travels around on a donkey to deliver the gifts. Children leave coffee for Lucia and a bowl of milk and carrots for the donkey.

In regions such as Lombardy and Veneto, Goose is the main fare for the holiday. In Udine, Venice, where her bones are buried and many go to pray to Lucy, frico, or fried cheese wedges are served to honor her memory. Children receive candy and gifts and sing for the Feast.

In preparation for Christmas, many Italians pray Christmas Novenas-nine consecutive days of prayer which ends at Midnight Mass on Christmas Eve. In Rome and some other Italian cities, the sounds of bagpipes can be heard ringing through the streets to announce that Christmas is near.

The Nativity, above all else, is the centerpiece of decorations. The image of the Holy Family as seen in the crèche (as legend tells us was first created by Francis of Assisi) symbolizes the two most important parts of Christmas for Italians: the birth of Christ and family togetherness. From living Nativities traveling from home to home or stationed in the Piazzas, to the still figurines, whether small or life-size, these scenes adorn every imaginable public place and private home.

Christmas Eve traditionally begins with a sumptuous meal, meatless, and usually comprised of multiple fish dishes-seven fishes is the number most commonly associated with this meal. Capitone, or fried eel is a favorite main course. (On a personal note, I will never forget the Christmas Eve that my Aunt Sylvia, never averse to making jaws drop, had a giant eel sitting on the table as her centerpiece of food. We American-born children just squealed and ran for the other room!)

Following Christmas Eve dinner, many attend Midnight Mass. The Pope presides over the Mass at the Vatican-a most solemn and moving event. Some families stay up the whole night following Mass enjoying games and celebrating!

Christmas Day is simply spent enjoying family time. Christmas dinner is served midday. Meat-filled ravioli or tortellini is one of the most traditional Christmas meals. Lamb and gooseliver are often included in the menu, served with accompanying vegetables and mashed potatoes and lentils.

Sweet breads such as Pannetone (from Milan), Pandoro (star-shaped from Verona), Pangiallo (Roman), Panforte (a dense fruitcake from Sienna dating back to a 13th Century monastery), Panpepato (a gingerbread cake from Ferrara and Tuscany), and Pandolce (Genovese) are served for dessert.

Almonds, served in a number of desserts such as torrone and other cookies, are very traditional and important to include in a Christmas meal because, according to folklore, eating nuts contributes to the fertility of the earth and its people.

Epiphany, also known as the Feast of the Three Kings, is celebrated on January 6 and is the highlight and the conclusion of the Christmas Season for many in Italy. On the eve of Epiphany, Italian children prepare for the arrival of La Befana, a somewhat dilapidated, but lovable witch who rides her broom around bringing gifts to good children. Stockings are hung by the chimneys, much like in the tradition of Santa Claus.

According to legend, a few days before the birth of Jesus, Befana was asked to join the Magi to follow the star to find the Christ Child but declined, stating she was too busy with her chores. After the Wise Men left, Befana realized she should have gone with them and tried to follow them with a basket full of sweets. She never found the Three Kings or the Baby Jesus, and it is said that on each Epiphany she flies around on her broomstick still trying to find them.

No matter which tradition is celebrated, the most essential parts of the holidays for the Italians still remain: faith, family and food.

More in this category: « Finding the Way Back to the Garlic Corners Little Italy - Italian Immigrants Influence America - Part 1 »