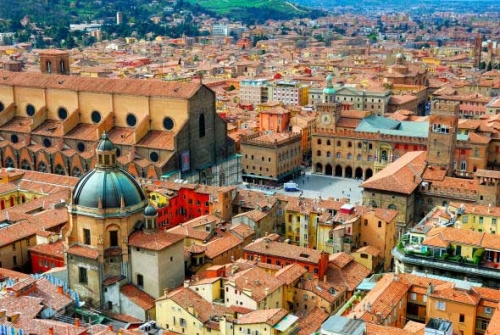 Bologna is one of the most cultured cities in the world. Often referred to as the cuisine capital of Italy, it's a must-see for any visitor seeking a wealth of gastronomical delights. But why is Bologna considered to be such a center of culinary delights? Why do many Italians from all parts of Italy agree that when you're in Bologna si mangia sempre bene (you will always eat well). You certainly won't go hungry in other Italian regions, but while Roma, Napoli and Toscana have their own gastronomic pleasures, there is something about this city that keeps it head and shoulders above the rest. However, even with all those great attractions, tourists often overlook Bologna, which is situated somewhat evenly between Florence, Venice and Rome. Yet there is no question that this is an exceptional place to go for some of the best cooking in all of Italy.

Named a European city of culture by the European Union in 2000, Bologna is most famous for its historic university. Founded in 1088, the University of Bologna is the oldest existing university in Europe and was an important center of European intellectual life during the Middle Ages, attracting scholars from all over Christendom. The city is also well known for its unique architecture with beautiful porticoed streets to protect pedestrians from the rainy and windy late autumn and winter months. These porticoes come sweeping down from Bologna's most famous church, San Luca, situated beautifully atop the hills surrounding the city. In total, there are some 38 kilometers of arcades in the city's historical center. The portico of San Luca, the longest in the world at 3.5 kilometers (666 arcades), connects the Porta Saragozza (one of the twelve gates of the ancient walls built in the Middle Ages) with the San Luca Sanctuary on Colle della Guardia overlooking the city.

Nearly 450,000 people live in the city proper and about one million in the metropolitan area, including over 100,000 students of the ancient and renowned University of Bologna. Nestled in a valley surrounded by picturesque rolling hills between the Po River and the Apennines, Bologna is a cosmopolitan, yet traditional, city with a proud dining tradition. It ranks as one of the top cities related to quality of life in Italy. This is due to its strong industrial tradition and physical position -- located at the crossing of the most important highways and railways in the country -- as well as its wide range of highly developed social services. Bologna and its metropolitan area have several important industries in the fields of mechanics, foods and electronics, important retail and wholesale trade and the first Italian vegetable and fruit market.

As you walk through this magnificent city, you will be amazed with its renowned culinary tradition. On display in meticulously arranged store windows throughout the city center you will find a large number of shops with handmade (fatto a mano) golden pastas sold by the kilogram. The best handmade pastas can be found in the historical center of the city around Piazza Maggiore. The recipe for this handmade pasta of Bologna has most likely been handed down from grandmother to granddaughter, so that you are, in essence, eating pastas that have been taste-tested by generations of hungry Italians. Bologna is also well known for its Bolognese sauce, a meat-based pasta sauce called in Italy ragù alla Bolognese but just ragù, as in tagliatelle al ragù, in the city. Its handmade egg pastas, like tortellini, tortelloni and tagliatelle, can be served in a variety of ways. Tortellini, small pasta filled with prosciutto, mortadella, Parmesan and other spices, are usually served in brodo (broth) or con panna (in a rich cream sauce). Tortelloni are essentially super-sized tortellini with a ricotta cheese filling in place of meat and can be served with a variety of sauces. Bologna's rich local cuisine also depends heavily on meats and cheeses. As in all of Emilia-Romagna, the production of cured meats such as prosciutto, mortadella and salami is an important part of the local food industry.

Until the early nineteenth century when a large-scale urban reconstruction project was undertaken, Bologna remained one of the most well-preserved medieval cities in Europe. To this day it remains unique to its historic value. Despite having suffered considerable bombing damage during World War II in 1944, Bologna's historic center, Europe's second largest (after Venice), contains a wealth of important Medieval, Renaissance and Baroque artistic monuments. It is also home to numerous important churches: The Basilica of San Petronioâone of the biggest cathedrals in the worldâSan Pietro and Santo Stefano Basilica and Sanctuary.

The city is very accessible by train, the Aeroporto G. Marconi and the freeways or autostrade.

Osteria de Poetiâ Located on Via de Poeti 1B, this restaurant is in the wine cellar of a 14th century palace. It's a great place to enjoy the hearty local specialties. Be sure to reserve a table by the restaurant's impressive stone fireplace and order the gnocchi di zucca (gnocchi made with pumpkin) or tagliatelle al ragù.

Tamburiniâ This is Bologna's most famous delicatessen. Located on Via Caprarie, 1, This famous eatery is not to be missed and is a favorite of the famous chef Mario Batali. Get here and grab a table early! The self-service selection is exquisite.

For gelato, try La Sorbetteria Castiglione, located on Via Castiglione, 44. This gelateria received international recognition in 2003. Its homemade gelato is simply superb.

Bologna will be part of the 14 days/12 nights first class Bella Italia Group tour departing from Cleveland on September 24th â October 7th. For more information call 330-633-2292 or visit www.davincicustomtravel.com. Peter D'Attoma is president of DaVinci Custom Travel & Tours. He has over 30 years of planning and designing independent, custom and escorted tours of Italy for individuals, groups and incentives.