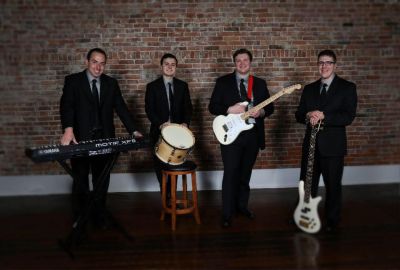 Twentieth-century American businessman, author and philanthropist W. Clement Stone coined the phrase “You are a product of your environment, therefore choose the environment that will best develop you toward your objective.” He also encouraged the masses to “Analyze your life in terms of its environment by evaluating the things around you and determine whether they are helping or hindering you from achieving your dreams.” Following such sage advice has served as the foundation for the success of many individuals throughout recent history. “Gli Italiani” (The Italians) are a young band hailing from Canton, OH who have dedicated themselves to the preservation of their common Italian heritage. The culture, which they hold near and dear to themselves, permeates not only their music but their lives in general.

Original founding member Andrew Pileggi, who serves as the lead vocalist, keyboardist and accordionist was exposed to Italian culture and music on a regular basis at an early age. His southern Italian ancestral roots trace his paternal family lineage to the province of Catanzaro in the region of Calabria and his maternal origins to the province of Campobasso in the region of Molise. Leaving a lasting musical impression upon him were the frequent family gatherings on both sides of the family along with social community activities steeped in the Italian traditions; both of which always included Italian music. Andrew found himself captivated by the enchanting melodies of traditional folklore-based waltzes, polkas, mazurkas, and tarantellas. He was even more drawn to the magical sounds that emanated from the keyboard-style accordion. Self-taught on piano basics by age eight, Andrew began formal instruction on the piano accordion two years later. During this time, he also expanded his musical acumen to include proficiency on the saxophone. Finally, formal voice lessons at age 15 would round out his musical resume and set the foundation for what was to come. While in the band program in high school, Andrew met the three other future founding members.

Matthew Strobelt, guitarist and vocalist, began his musical career at age 10 and was classically trained on the trombone. His early formative experiences in concert and jazz bands would soon lead to his choosing the guitar as his instrument of choice only a year later. He also developed his vocal skills to complement his growing guitar abilities. His interest in Italian music and culture was deeply rooted on the maternal side of his family.

David Wilson, drummer and vocalist, was destined to be a drummer as he carried on the legacies established by his father and brother, both accomplished musicians. His musical talents were sharpened through formal lessons and he later developed invaluable expertise in live sound and recording production techniques. His strong ties to the Italian culture were also attributable to the maternal side of his family.

Collin Mikeska, bassist and vocalist, was the original fourth founding member and, like the others, was of partial Italian heritage. With the fundamental pieces in place, their musical journey began as young high-school teenagers with their first public appearance in the summer of 2010 at the popular Festa Italiana in Cuyahoga Falls, OH.

Their debut performance was strictly instrumental-based as the band sought to initially enhance their stage presence and hone their technical dexterities. Invariably over time, the group was often asked to provide vocal accompaniment to their music. Therefore, they made the decision to not only develop their singing skills but also learn how to sing in the Italian language. Through exhaustive practice and rehearsals, it would not be long before they carefully and successfully introduced vocals to their live shows.

The next step in their evolution was to enter the studio to lay down the tracks for their debut release, resulting in their first album, “Sounds from Italy” (2012). This 12-track recording was produced by David Marchione at his Sonic Blues Studio in nearby Beach City. The album featured an eclectic mix of regional folklore, instrumental, movie soundtrack, contemporary Italian standards and an original polka composition entitled “Polca dei Gli Italiani.” A fortuitous encounter with Cleveland-based radio personality Tony Marotta would lead to the band performing their first gig outside their comfort zone before a large audience at an annual spring dinner-dance event hosted by a local Cleveland Italian club. They shared the stage that evening with another Italian band; popular and long-time local favorites, Oro Puro. On hand that evening were representatives of other local Italian clubs that expressed an interest in hiring Gli Italiani for their upcoming social events as well as several private individuals seeking to enlist their services. The band began a musical adventure that would take them to festivals and events outside of northeastern Ohio.

College commitments and artistic differences led to bassist Collin’s departure from the band in 2015. Good fortune smiled upon them, however, as they recruited Anthony Lumpp as their new bassist and vocalist. He was a seasoned poly-instrumentalist with an extensive musical resume that featured previous associations with various other groups specializing in diverse styles such as jazz, blues and rock. Anthony was several years older than his new bandmates and his presence immediately provided a much needed spark that  propelled the group to enlarge their repertoire and eventually return to the studio and put the finishing touches on their follow-up album “Ritmo e armonia” (2019). The 16-track recording was produced by David Mayfield at Sweetside Recording Studios in Canton. The release again featured a careful blend of regional folklore, instrumental, contemporary Italian standards, and an original song “Mazurka Marianna” written for the group by Andrew’s grandfather, Armand Pileggi.

Gli Italiani have become the new face of Italian music in northeastern Ohio and have nothing but time on their side. For more information you can visit their website at www.gliitalianiband.com or their Facebook page.

Tweet
More in this category: « Giada Live Frank and Ava »