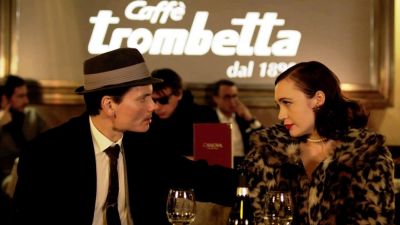 A down-and-out Frank Sinatra, trying to hold on to his voice and salvage his career, falls hard and fast for the sultry starlet, Ava Gardner, in the tumultuous, heart-stirring Hollywood romance of “Frank and Ava.” Directed by the recently acclaimed Michael Oblowitz, “Frank and Ava” features Sinatra at the downturn of his career, desperate to attain the role of Private Angelo Maggio in Columbia Picture’s “From Here to Eternity” while simultaneously divorcing his wife, Nancy, and entering a sexually charged but suspicion-filled marriage with Gardner. Landing the role in “From Here to Eternity” claims Frank one of the greatest comebacks in Hollywood history, but the attainment is bittersweet, marked by his toxic marriage to Gardner. “Frank and Ava” stars Rico Simonini and Emily Elicia Low in the title roles and features, among others, Eric Roberts and the legendary Harry Dean Stanton in his last feature film appearance.

Bringing “Frank and Ava” to the big screen is a story all in itself. Rico Simonini was born and raised in the Bronx, NY. He grew up in a colorful Italian American family. Both of his parents were born in Torre del Grecco, Italy, a town at the foot of Mount Vesuvius, outside of Naples. His mother, Fernanda, immigrated to New York via the luxurious Italian passenger liner, the Andrea Doria. Being one of nine children, she and her family travelled in the steerage department. As it happened, his father Michael (who would later be known in NY as “Mike the waiter”) was a waiter on board in the first-class section of the Andrea Doria. When a friend told Mike there were women they should meet in steerage, Mike passed because he was not interested in meeting anyone from his hometown.

Mike continued to work on board the Andrea while Fernanda’s family created a life in the States. As luck would have it, the Andrea Doria sank on July 25-26, 1956 after colliding with the Stockholm off the coast of Nantucket. Mike was rescued, “it was an Italian ship, so it took a while to sink!” he says when recalling the story. Those employees rescued from the ship were brought to New York before being sent back to Italy and given new jobs on smaller, less luxurious liners. Mike was not one for the less luxurious. So, he hid out in the Catskills, working in Italian restaurants in the city.

Mike finally met Fernanda while making a delivery with a friend to her mother’s house. Opting to have a smoke outdoors while his friend entered the house, Mike was reluctantly persuaded inside by Fernanda’s mom and her pasta. As were the times, Fernanda and her sisters were locked in a bedroom while strange men were in the house. But, peeking through the keyhole, Fernanda’s sister saw Mike, jimmied the lock and Fernanda ended up falling on the floor right in front of him. The following day, Mike called the house and asks to take one of the girls to dinner. “Which one?” Fernanda’s mom asked him. “The one who fell on the floor,” replied Mike. They were married a month later. They started their family and stayed in the Bronx.

“Mike the waiter” and Fernanda’s son, Americo (Rico) Simonini, grew up kissing the rings of wise guys, being dropped off at school in his dad’s friend’s Thunderbirds or Continentals while they were away for a few years “on vacation” and watching old Hollywood black and white films with his mom. It was during these times that he got sucked into the film world; infatuated with the characters and the stories being told. His Jesuit high school required a well-rounded education. Rico wanted to become a doctor but had to study the works of Shakespeare and Chekhov as well. While his self-proclaimed “science nerd” side led him down the path of medicine, his imagination had him writing short stories and plays during his pre-med years.

After years of schooling, Rico became Dr. Americo Simonini, a cardiologist who currently practices at LA’s Cedar-Sinai. He continued to write and act on the side. He was approached by a patient during a visit who said “You’re Italian and from New York, right? I’m doing a table read for my script and Danza backed out. Read this.” Rico immediately read the lines handed to him and his patient responded, “Come Saturday night.” Rico landed the part and many others to follow.

In 2014, playwright Willard Manus chose Rico to originate the role of Frank Sinatra in “Frank and Ava,” a play developed at the Actors’ Studio. The play ran for six months with great reviews. Rico channeled his father to develop the character of Frank. “Frank believed in things, was loyal to friends, rooted for underdogs, cared where he came from, had impossible dreams. Dad was the same. He always ‘had a horse,’ was ‘maneuvering’ things, told us not to ask a lot of questions. He was a character, for sure.” The play inspired Rico to undertake a screenplay adaptation of “Frank and Ava” and his first feature film production premier in 2018, with global release in early 2019.

Rico says that his careers in medicine and acting go hand-in-hand. “In both of my professions, I need to know ‘what makes people tick?’ I understand the wants and needs of my patients and the characters I portray. How do I react to those needs? It takes similar skills to read into a moment or situation and react in that moment in a way that makes a patient or the audience feel whatever they should be feeling.” Rico continues, “My up-bringing and my medical work have engrossed me amongst the most colorful, animated and flavorful characters of all time. From dad and his wise guy buddies to patients in NY’s Bellevue Hospital, I have lots of characters to build stories off of.”

Rico’s own personality is dynamic, hilarious and spirited. The thick Bronx accent helps to define his own character and the Italian charm draws you in immediately. It is no surprise that Rico is successful in medicine and in the entertainment industry. Today, Rico is soaking up the fun of promoting “Frank and Ava,” spending time writing, working with Sean Penn as an activist in the fight against COVID-19, and mending hearts at Cedar-Sinai.

When asked what his dream project is, Rico replied, “Writing the story of my dad and I.” He says that like a fine wine, it takes time.

“Frank and Ava” is available now on itunes and Amazon Prime Video.