East side, West side, all around the town... 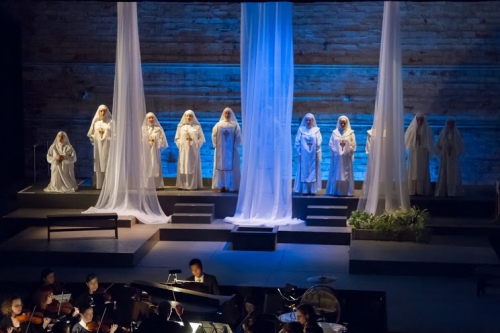 If you haven't yet heard Opera Per Tutti in performance, it isn't because they've not yet been to your part of the city. Since their first formal appearance in March, 2007, the company has performed in Beachwood, Solon, Akron, Chagrin Falls, Cleveland Hts., Bainbridge, Rocky River and multiple sites in Cleveland, including Little Italy. Starting with Severance Hall, performances have also been at the I-X Center, The Detroit Superior Viaduct (as part of Ingenuity), the City Mission, Breen Center for the Performing Arts, and most notably The Italian Renaissance Cultural Garden on the East side of Cleveland. For the past year the opera company has been in residence at Cleveland Public Theater on the West Side.

The energetic founder of Opera Per Tutti is soprano Andrea Anelli, a native Clevelander who traces her Italian heritage and musical ability to her grandfather, Achille Anelli from Palermo, Sicily who was a conductor and composer of opera. His most celebrated opera, La Contessa di Trigona, is a true story of infidelity, bribery and murder, and it was performed in the U.S. at the Brooklyn Academy of Music in 1914. Anelli's father, Armand, was a trumpeter in the big bands fronted by Eddie Duchin and Gene Krupa. One of the band's tours brought them to Cleveland, and here, they lost their trumpeter. Cleveland, on the other hand, gained a talented musician who passed his love for music on to his youngest daughter, Andrea. As a theatre major at Hiram College, she had the opportunity to concentrate on developing her skills as an actress. That background has had a major influence on the development of Opera Per Tutti as an opera company that emphasizes realistic acting as well as beautiful singing.

"I really think that the traditional stereotype of opera doesn't have to be true," says Ms. Anelli. "The diversity of forms and musical styles means that there can be something for everyone, but it must be presented in an accessible and realistic way so that people care about the characters and really become immersed in the story. Our job is to break down barriers and the stereotype that many people hold regarding opera. The key is to be able to see in the performer's faces the emotion generated by the music and the words."

Perhaps because he is such a master of the theatre, the company has been especially drawn to the works of composer Giacomo Puccini, who specialized in the "verismo" or "real life" style. In the fall of 2010, the company presented the composer's one act drama, Il Tabarro at Cleveland Public Theater, in its first appearance there. The successful production brought them back for future events. In the spring of 2013, the other two parts of Puccini's Il Trittico were performed as a double bill: Suor Angelica and Gianni Schicchi. Both performances of the double bill were sold out, creating happiness for everyone involved. They have also presented Puccini's sentimental masterpiece La Boheme in collaboration with the Blue Water Chamber Orchestra and are looking forward to March 28 and 30, 2014, when they will produce La Rondine, which has apparently not been performed in this area since the 1929 Metropolitan Opera's tour to Cleveland. The performance will take place at the Gordon Square Theatre in the Cleveland Public Theatre Complex, where Opera Per Tutti is in residence.

One of the company's other great success stories has been the performances each summer at The Italian Renaissance Cultural Garden, located along Martin Luther King, Jr. Boulevard, on Cleveland's East side. With six singers and an accompanying pianist, they present arias from mostly Italian operas. The first appearance in 2007 was such a success that they performed an encore appearance a month later. That first performance drew an audience of about 250, and in 2013 the crowd had swelled to over 1500! The renovated garden is beginning to resemble a 'baby' Blossom Music Center, judging by the picnickers with wine, champagne and gourmet antipasti or wood-fired pizza!

"One of the major emphases for Opera Per Tutti is to provide more opportunities for professional singers and instrumentalists in Northeast Ohio," Anelli says. "This area is unique in that it has a very deep talent pool. It is very rare that we are not able to cast a role with an extremely talented local professional. We are also in the process of developing a young artist's program to feature some of the many gifted students from music conservatories such as the Cleveland Institute of Music, Baldwin Wallace and Oberlin."

"We also want to bring opera to people who've had limited opportunities and exposure to it, or an earlier experience which was, perhaps, less than stellar," she adds. "We perform in many of Northeast Ohio's diverse communities, generally in smaller venues, so that the audience can see the singer's expressions and feel more connected to the performers. Also, our ticket prices are very affordable -sometimes even free, such as the concert in the Italian Cultural Garden and Arts in August in Tremont's Lincoln Park."

This December's performance to benefit the City Mission of Cleveland is also free, Celebrate!: A Concert of Sacred and Secular Holiday Favorites will be a family friendly performance presented at the Cleveland Public Theatre on December 14 at 3 and 7PM.

Funding is always important, and one way for Clevelanders to support this local opera company will be a benefit to be held at the Cleveland Public Theater's Gordon Square Theatre on November 9. 'Dress 2 the 9's' will feature a concert performance of operatic repertoire plus a gourmet menu of antipasti and small plates with a specially paired wine list by Luca Italian Cuisine, the high-end Italian restaurant, and a gala dessert reception. For more information about this or other events, or to be added to the mailing list, please call 1-440-285-1874 or visit http://www.operapertutti.org