In Spoleto, Noble Splendor in the Town Library 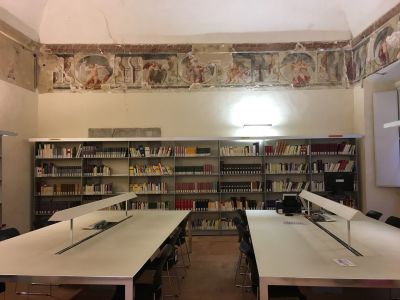 As you wander the labyrinthine medieval backstreets of Spoleto, you will pass many an imposing noble palazzo. Certainly, the elegant 17th century Palazzo Mauri should be a stop for bird-lovers and ornithologists.

The building was completely renovated in 2009 and is now the public library. When I visited last year, flowers were being unloaded in front of the palazzo, adding a burst of color to the façade. Inside, what splendor spreads out over readers as paintings adorn most rooms. Works by Alessando Bottoni (17th century) as well as Giuseppe Valerini and Domenico Sergardi (18th century) look down upon the library’s guests.

For me, the loveliest room is the delightful la Sala degli Uccelli (Room of the Birds) with its ceiling painted by Alessandro Bottoni in 1622. Playful cherubs try to capture birds above a balustrade where a variety of birds perch among intertwining vines.

A library employee gave me a tour, opening doors for me not generally open to the public, like the one to the tiny room adjacent to the Sala degli Uccelli which he showed me with a twinkle in his eye.  An inventory document of 1627, found after the death of Antonio Mauri, listed the objects here: “a small seating place, a copper chain, and two copper pitchers.” It was a bathroom! And a lovely one; fake marble slabs adorn the wall, a flowering pergola where birds perch spreads out on the ceiling.

Now housed in this noble palace, Palazzo Mauri, the Spoleto library has 13 different sale di letture (reading rooms), most of them elegantly decorated. Coats-of-arms appear in various paintings and the scorpion, the symbol of the Mauri family, can be spotted in wall paintings, marble reliefs and sculptural reliefs.

In the late 18th century to the very early 19th century, the Sala dei Ruderi (The Room of the Ancient Ruins) was painted with scenes of ancient ruins set in pastoral landscapes, floral and vegetative motifs intertwining around seated figures and Spoleto family coats-of-arms. There are playful cherubs in the pale blue ovals on the ceiling, probably intended to hold lamps suspended over the room.

Episodes of the Greek myth of the demise of Phaeton, son of the Sun God Helios, who flew his father’s sun chariot too close to the sun, adorns another room.

As I gazed at the stunning walls and ceilings of Palazzo Mauri, I wondered how the Spoleto library visitors were able to concentrate on research and reading with this splendor all around. But then again, this is Italy – where even the public libraries are often set in splendor.

View the embedded image gallery online at:
https://www.lagazzettaitaliana.com/travel/9986-in-spoleto-noble-splendor-in-the-town-library#sigProId61c2d47a65
Tweet
More in this category: « Flying on a Budget to North Italy July Sunflower Splendor in Umbria »