Flying on a Budget to North Italy 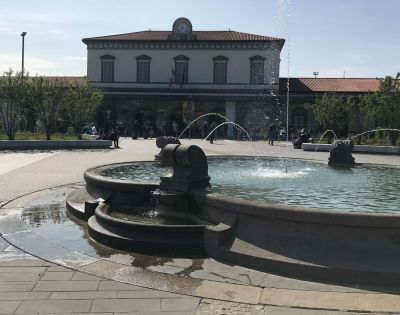 Pros and Cons of Bergamo Airport

We all want to travel to see the delights of northern Italy, preferably without spending a fortune on getting there. U.S. passengers will not find trans-Atlantic flights at Milan-Bergamo Airport, but they may consider using this airport to get around Italy or many other European destinations, being tempted because of a good choice of low-cost flights. But beware! It is not quite as convenient as it seems.

Bergamo was not always on the regular tourist trail. Road and rail connections are not particularly good, and it was not a top destination. But things are changing.
Bergamo is a very attractive little town on the fringes of the Dolomites, built on several levels. The lower level, the Citta Bassa, is the functional business area where you will find the train and bus stations, as well as the important picture gallery of the Galleria dell’Accademia Carrara. There is a funicular railway which tunnels though the Venetian walls to the architectural wonders of the Città Alta.
The jewel of the upper town is Piazza Vecchia, whose buildings include the 12th century Torre del Commune with a fine clock and curfew bell which rings every night at 10 p.m. Other buildings from the same period show Venetian influences and there is the inevitable statue of the lion of St Mark. There are arcaded streets and more architectural delights including the Cappella Colleoni built in 1476. It is pleasant to wander around, or just sit at a pavement café and watch the world go by.
For music lovers, Donizetti lived here, and there is a museum devoted to his life and works (including his piano).
Bergamo has a small Botanical Garden up a flight of steps beyond Donizetti’s birthplace. There is even a further, higher level, the Rocca, with the remains of a castle and a fine view over the rooftops.
If you have a late-ish departure, it is certainly worth spending half a day in the upper town before setting off for the airport.

Bergamo Airport is close to the town at Orio al Serie. It somehow seems appropriate that it is called Caravaggio Airport after its most famous – or infamous – native. Caravaggio is famous not only as a great renaissance artist but also a murderer. It also calls itself Milan-Bergamo airport, giving the impression that it is quite near Milan, which it is not. Buses from Milan take 115 minutes to the airport, and the Milan-Bergamo train takes 50 minutes before you then board the shuttle bus.
Airport buses from the stop opposite the station are frequent and get you there in around 10 minutes but they are often very crowded with standing room only and nowhere to put luggage. You can buy tickets (€3.50) from the Tabachi in the station or from the machine on the bus (€4) where you must also validate them. A taxi to or from the airport will cost around €16.

The airport has expanded enormously in recent years, mainly because of Ryanair, the Irish ‘no frills’ airline which now has connections from Bergamo to an amazing 102 destinations all over Europe. This means, of course, that getting through security can take a long time, but on the plus side, the airport buildings have been extended and the departures area is spacious and modern, with plenty of seats and interesting shops.
There are so many flights into and out of Bergamo Airport these days that buses are often needed between the gates and the planes which are parked miles away, but the staff are generally efficient at checking passengers through in time.
However, or perhaps I should write HOWEVER, Ryanair has a bad reputation as an airline. Looking on the departures board on any given day there are always flights marked ‘Delayed,’ and these are almost always Ryanair flights, possibly because they have almost impossible-to-achieve turnaround times.
They are also notorious for last minute changes to flights. On my recent flight home to the UK from Bergamo, I was sent a text the day before to say that the departure time was changed by almost 6 hours. I was pleased, as the timing was at a much more civilised hour, HOWEVER, (capitals again!) when I got through security and checked the Departures Board, my flight simply was not there. Trying to find an official who knew anything was a challenge too far. As time went by, an angry crowd of fellow passengers joined me, and as I was the only one who could speak Italian, I tried to establish what had happened. In the end, they had simply reverted to the original departure time except, of course, it was delayed. We finally left at midnight, having generously been given by the airline a €8 voucher each for a sandwich. I imagine there will be a lot of complaints filed!

Now, I notice that they are trying to attract more passengers with special offers of flights from £14.99 from most British airports, but I think I will steer clear of the stress of another possible lengthy delay.

Tweet
More in this category: « When in Rome: Go to Ostia Antica, Rome's Ancient Port In Spoleto, Noble Splendor in the Town Library »