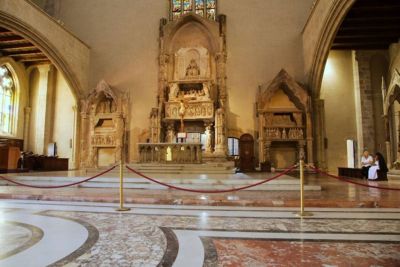 Queen Sancha of Majorca has certainly left her mark on Naples. Among other structures, she mandated the building of the Basilica della Santissima Annunziata and the double-monastic complex of the Basilica di Santa Chiara.

Her husband, King Roberto d’Anjou, is buried behind the main altar of Santa Chiara. The mid-14th century funerary monument was sculpted by two Florentine brothers, Giovanni and Pacio Bertini.

Tuscan architect Ferdinando Fuga’s marble pavement spreading out in the nave and leading to the presbytery dates to the Baroque renovation of the basilica in the 18th century undertaken by Domenico Antonio Vaccaro who completely canceled the Provencal-Gothic style of the original 14th century edifice. The pavement miraculously survived the Allied bombing on August 10, 1943, which devastated the Basilica.

Fortunately, WWII’s damage spared the cloister of the Clarisse (Poor Clares) transformed in the mid-18th century by Vaccaro with the unique addition of Rococo’s maiolica tiles painted by ceramicists, Donato and Giuseppe Massa, their work concluding in 1740.

This sanctuary of extraordinary beauty embodies a contrast between the outer world of Neapolitan noise and confusion and the serenity and tranquility of the cloister garden. The bright, bold colors with exuberant floral decorations conflict with the silent, introspective world of the cloistered Poor Clares.

Donato took on the task of constructing the cloister and creating the viali (walkways) and the riggiole (hand-painted tiles used for floorings and walls in the region of Campania). Giuseppe handled the decoration of the 64 columns adorned with bunches of grapes and leafy branches swirling upwards and the 60 maiolica benches, complete with their backings and tittoli di riggiole (curved, decorated portion atop the bench) depicting scenes of bucolic life and seaside scenes.

These Baroque masterpieces are not to miss on your next Naples trip.