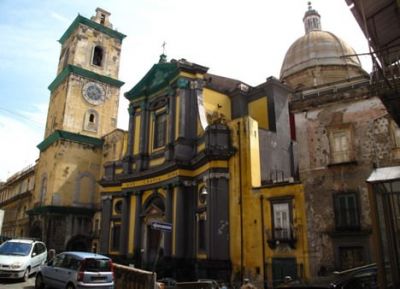 When recently in Naples, I was eager to see more of “undiscovered Naples.” Our explorations started at the Basilica della Santissima Annunziata Maggiore.

The Baroque church was built in the 13th century by the Angevins then ruling Naples. In 1317, Sancia of Majorca, queen consort of Roberto d’Anjou, King of Naples, had gifted some land to the lay charitable group, la Congregazione della Santissima Annunziata for the construction of a home for orphans. The 14th century Real Santa Casa dell’Annunziata included a hospital, convent, an orphans’ hospice, and a school for destitute girls. The charitable institution, supported by the noble families of Naples, had a long life which stretched to the mid-20th century.

This basilica has always been associated with orphans and abandoned children. Its concave facade is flanked by an 18th century bell tower with a maiolica clock on the upper level. Just behind the belltower is la ruota degli esposti – the wheel of the exposed. A mother would place her infant in la ruota, a basket on the street side which could be turned so that the infant was entrusted to the nuns while the mother remained anonymous. The nuns would immediately baptize and register the child in their orphanage adjacent to the church.

As of the 16th century, registers noted the day and time of arrival of each infant placed in la ruota, each considered “e figlie r’a Maronna” (a child of the Madonna), as well as a description of the child and any particular details to note: clothes, notes and small gifts left by hopeful mothers desiring one day to return for their child.

Near the wheel was a fissure in the wall where the abandoning mother could slip in offerings for assistance in the care of the child, documents perhaps, or small jewels, or other signs of recognition that might be of help in the future. A little packet may have been around the neck of the baby containing un santino (“a little saint” or a holy card), a medal, a rosary, or a fragment of coral for good luck. Sometimes, the minuscule objects would be cut in two, with one half being kept by the hopeful mother.

Degli Esposti became an orphaned child’s Italian surname. “Esposito” would become another surname for abandoned infants as well as “Diotallevi” (“May God raise you”).

Vincenzo Gemito is a noted sculptor. He was born in 1852 and abandoned by his parents to the ruota degli esposti of the Sant’Annunziata orphanage. He was originally given the surname of Genito, (generated or born), commonly linked to orphans. A transcription error later turned the “n” into an “m.”

View the embedded image gallery online at:
https://www.lagazzettaitaliana.com/travel/9896-naples-la-ruota-degli-esposti#sigProIdc8072db0de
Tweet
More in this category: « Naples’ Santa Chiara Cloister The Spanish Quarter of Naples: Where Culture is Salvation »