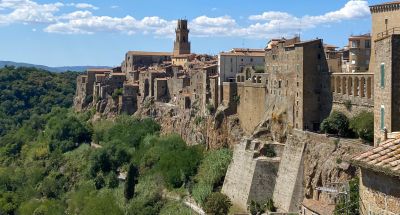 Pitigliano, the town of Roman thieves? It is, according to a legend that traces the name of this southern Tuscan town to two thieves, Petililo and Celiano, who fled Rome after theft of a golden crown from a Jupiter statue on the Capitoline hill. Legends always bear a thread of truth and at the end of the 4th century B.C., a group called “Gens Petilia” did exist.

Carved from volcanic stone, the town of Pitigliano is located south of Montepulciano, and not too far from the thermal mineral waters of Bagno San Filippo. The cliffs of Pitigliano, Sovana and Sorano protected the remains of the many peoples who called the Fiora Valley, and its protective peaks, their homes since 2300 BC.

Prior to the Roman domination of Pitigliano, the Etruscans settled here as evidenced by various archaeological finds in the area dating from the 7th to the 2nd centuries B.C. Outside Pitigliano, the 4th century early Christian oratory carved into volcanic rock, il tempietto, is probably the result of the transformation of an Etruscan tomb. Perched on a volcanic rock plateau, the position of Pitigliano was defensive, not just for the Etruscans but afterwards for the Romans and then the Lombards.

The Maremma, a coastal area of western central Italy, borders the Tyrrhenian Sea and includes much of southwestern Tuscany and part of northern Latium. In the 13th century, Sovana declined in importance as seat of the Aldobrandeschi, while Pitigliano’s prominence increased. Pitigliano definitively became seat of power in the area when the young countess Anastasia married Romano Orsini at the end of the 13th century, bringing all the family and Sovana wealth to Pitigliano.

At the time of their marriage, Pitigliano, perched on high on the tuff rock plateau, was determined a much more secure place of defense for the ruling Orsini family.

Following the death in 1280 of the most illustrious Orsini family member, Pope Nicholas III, the entire contea (area ruled by a count, a county) was ravaged by internal wars as well as attacks from Siena. Frequent conflicts with Siena continued until the mid-15th century when the semblance of a compromise was reached. Pitigliano received recognition as a contea but under Sienese sovereignty.

In the mid-16th century, Pitigliano came under the reign of the Granducato di Toscana (Grand Duchy of Tuscany) and the splendid Medici aqueduct, l’aquedotto mediceo, with its 15 arches, dates from that period.

These are just a few of the treasures visitors will find in Pitigliano.

View the embedded image gallery online at:
https://www.lagazzettaitaliana.com/travel/9847-discovering-pitigliano-the-town-of-roman-thieves#sigProId229d35ce0b
Tweet
More in this category: « Near Spoleto, Lombard UNESCO World Patrimony Majesty In Montefalco: Treasures in the Church of San Francesco »