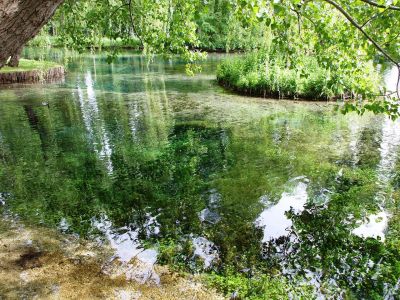 When the 28-year-old Lord Byron was in Spoleto in 1816, he was captivated by the Fonti del Clitunno “the purest God of gentle waters! And most serene of aspect, and most clear…” Byron lauded the Clitunno Springs in his narrative poem, “Childe Harold’s Pilgrimage.”

Over the centuries, poets have sung the beauty of the Fonti del Clitunno, from Virgil to Pliny the Younger to Italian poet, Giosue Carducci. Virgil wrote about the oxen and sheep, immersed in the fountain who emerged pristinely white and purified for sacrificial offerings.

The Clitunno River was at one time more abundant and navigable all the way to Rome. With the 440 B.C. earthquake, many veins of the spring were altered and thus the water supply was greatly diminished, though the Fonti del Clitunno still remains one of Italy’s most important springs with an outflow of 400 gallons per second.

Like many other rivers in the east Umbrian plain, the spring could be subject to sudden flooding, although it was finally properly managed in the 19th century and is now largely banked by levees.

The Romans worshipped the god, Clitumnus, personification of river waters, and believed that he dwelt in the depths of the rivers. The springs were considered sacred and celebrated each springtime with festivities called “i Clitunnali” (Clitumnus celebrations) and various sacelli (small temples) were built in his honor in the area.

In 1730, an earthquake gravely damaged the tempietto, depicted in an etching (now at the Metropolitan Museum of Art, NY) by Giovanni Battista Piranesi in 1748. A hermit priest, Padre Ilarione da Lucca, received permission from the bishop of Spoleto to sell marble remnants resulting from earthquake damage for the purchase of liturgical furnishings for other edifices. In 1767, Cardinal Carlo Rezzonico mandated an edict forbidding the theft and subsequent sale of marble remnants of the temple.

Historians and archaeologists once theorized that the tempietto had been a sacello romano, reconsecrated as a church, but a relief of a cross in the tympanum as well as other sculptural adornments confirm the building as a Christian edifice.

The architrave running above the Corinthian columns on the facade bears a rare example of a monumental epigraph of the early Middle Ages. In block Roman capital letters, the lengthy inscription praises the Resurrected God of the Angels, the Lord God of the Apostles who remitted all sins and the Lord God of the prophets who was the Redeemer. The columns and capitals could possibly be reimpiegati (re-used, recycled, Roman ruins). It is likely that the Lombard dukes of il Ducato di Spoleto reigning from the 6th – 8th century A.D. mandated restoration of the tempietto with the utilization of pre-existing Roman temple remains, thus creating one of the seven gems of Lombard architecture declared UNESCO Patrimonio Mondiale i Longobardi in Italia.