In Montefalco: Treasures in the Church of San Francesco 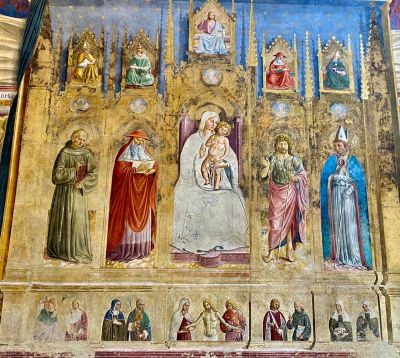 The highlight of a visit to Montefalco’s 14th century Church of San Francesco will certainly be the splendid mid-15th century fresco cycle in the church’s apse of the life of St. Francis by esteemed Florentine painter Benozzo Gozzoli.

But the Franciscan church, now il Museo di San Francesco, houses many wonders. As in countless churches of ancient origin, the decoration of the church walls and side chapels is a result of continuous superimposition due to pious initiatives. The wall decorations painted between the early 14th and 17th centuries, are the “result of the devout pressure of various individuals or collective parties, who often cancelled out one other’s initiatives,” as esteemed art historian Bruno Toscano has written.

Entering from the pinacoteca (picture gallery), housed in the 14th century Franciscan monastery adjacent to the church, visitors are led down the steps into the church. A tempera-on-wood panel painting, “la Madonna del Soccorso,” greets you: an example of the pious commissions cited by Prof. Bruno Toscano.

Painted in 1510 by Tiberio d’Assisi (who had probably trained in Perugia under Pinturicchio, then under Perugino), the inscription along the bottom tells us “Griseida di ser Bastiano had it made for the souls of the aforesaid per Bastiano and of Franceschina, in the year of Our Lord, 1510.”  Toscano theorizes that the Virgin might in fact be a portrait of the Franceschina mentioned by the patron in his commission to the artist.

The image alludes to the legend of the impatient young mother, annoyed by her capricious child, exclaiming, “May the devil take you!” When the devil then does grab the child, the repentant mother seeks rescue from the Virgin. The Virgin is characterized by youthful beauty and nobility as she brandishes a club, and the devil is a monstrous human/bestial hybrid.

In the side aisle, not far from “la Madonna del Soccorso,” hangs a crucifix painted in tempera on a wooden, molded panel by an Assisi artist, follower of Giotto, known as “Il Maesto Espressionista di Santa Chiara.” The cross was commissioned by the Franciscans, evident by the image of the kneeling figure of St. Francis, kissing the feet of Christ, “thus calling attention to the suffering born by the Savior for the redemption of men.” The main shaft of the cross and the frame are adorned with the motifs of textiles and tapestries of the period.

Toscano considers this artist one of the most skilled in assimilating Giotto’s “invention of a distinct western pictorial language freed from the stereotypes of Byzantine painting and mindful instead of visible reality, often seen in relation to the deep economic, social, political, and then cultural changes that took place in the period.”

Many Franciscans are depicted in Francesco’s church, including Bernardino da Siena who preached in Montefalco in this very church in 1426, his intent to unite the faithful in the name of the Lord, always invoked at the start of his impassioned sermons. Concluding his fiery sermons, and how he drew in the crowds, he would bless the people raising up a panel painted or incised with the monogram IHS, the acronym for “Iesus Hominum Salvatorum”  (“Jesus, Savior of Mankind”). In 1426, when San Bernardino preached in Montefalco, he reconciled quarreling locals and, according to tradition, to seal the pacification he had brought about, he gave them the panel now in the museum.

Gozzoli depicted San Bernardino in another fresco commission in 1452. Jacopo di Montefalco, an intellectual of the community who had brought Gozzoli to Montefalco and who belonged to la confraternita’ di San Girolamo (Brotherhood of St. Jerome) in Perugia, had a strong personal devotion to the saint. Therefore, he most probably suggested the narration of the episodes. The fresco is created as a multi-dimensional polyptych on the wall, the vault above frescoed with images of the Four Evangelists.

The Virgin with Child reigns in the center of the polyptych and San Benardino is depicted to the left (near St. Jerome in brilliant red Cardinal’s garb). Another Franciscan saint is on the right, St. Louis of Toulouse, flanking John the Baptist. San Bernardino appears yet again in the predella of the polyptych, near San Severo, a 4th century military leader and co-patron saint of Montefalco.

The fresco episode on the opposite side depicts St. Jerome, many years later, bald with a long beard, tenderly removing a thorn from the lion’s paw. Two of his companions flee in terror.

Before you leave the Cappella di San Girolamo, San Bernardino appears once again, frescoed by Gozzoli in the round arch enclosing the space. Angels hold a rich and elegant tapestry, backdropping the bald saint.

San Bernardino is always easily recognizable for he is the saint in a Franciscan tunic, bald and toothless, and holding either his IHS plaque or a book. His other hand is often raised in a gesture of admonishing or preaching. Many Montefalco settings bear his image.

Tweet
More in this category: « Discovering Pitigliano: The Town of Roman Thieves? An Italian Pilgrimage with a Dog and a Donkey »